What is a papercut?

This thread is not for large feature requests or lots of back and forth about the general interface and paradigms. Please keep each post simple and short, preferably with images that illustrate the issue.

These tasks could then be made into separate small tasks and done be various developers.

The UI team will pick the best suggestions, which fit with the overall direction, and add them on the Blender developer portal in this todo task.

I’ll get the ball rolling by adding some to start with here:

Add Save Before Closing to File -> New

In Blender 2.8, we now have this helpful dialog to make sure you don’t lose unsaved changes:

However, this only gets displayed when quitting. If you go to File -> New, there is no such dialog. Clearly, there should be.

Indicate which button gets activated when you hit Return

For several popups in Blender, there is a button that gets activated when the user presses Return. However, there is no indication of which button this is.

We should add a separate theme color for the button that gets activated when you hit Return, like so:

Re-order Save Before Quitting to fit each OS

Each main OS uses a different order for the buttons layout in the Save Before Quitting dialog box. It’s important that we follow OS conventions to avoid user error.

We can make it so the order changes depending on the OS you are using.

In the Properties, we display the Material nodes as a list for editing. However, the hierarchy is not communicated at all, making it very hard to use this view as soon as you add a tree of nodes. With some simple changes, we can make the hierarchy visible, like so: 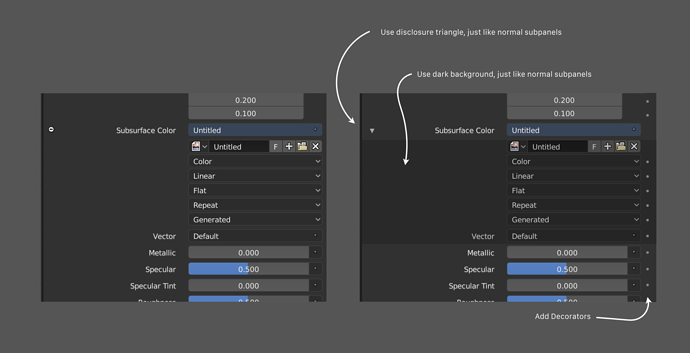 While we are at it, decorators should be added here too, for easy key framing and better visualisation of the state.

Like when you are browsing for an image and you enable the thumbnails display mode. The next time you try to browse it goes back to the default list view. Quite painful.

changing the console’s window style, since it’s a toggle if you close it you’ll close whole blender and your work won’t be saved. 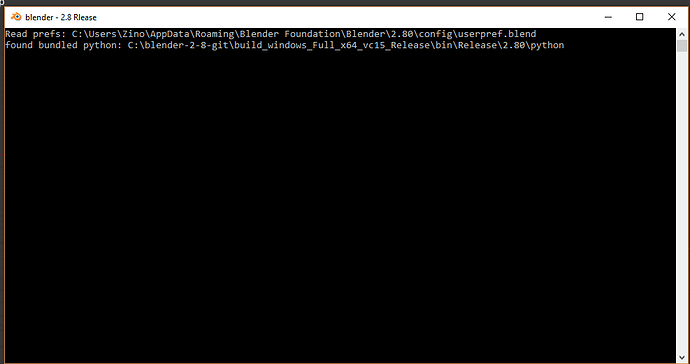 Why would you run Blender through a console? Regular users should not be doing that.

i know, but it’s an option provided in the window tab…if you report a bug or check for errors you have to enable the console from there and close button kills blender.

Remove the fadeout animation on the toolbar and toolshelf show & hide

When you press either T or N it has a fade-in/fade-out animation. It isn’t consistent with the UI and when blender is running a heavy scene, the animation doesn’t look that good, it seems some frames are dropped.

When enabling the cycles viewport render, there is some overlap with the render info and some viewport elements

Maybe you could switch the render information to the bottom of the viewport. 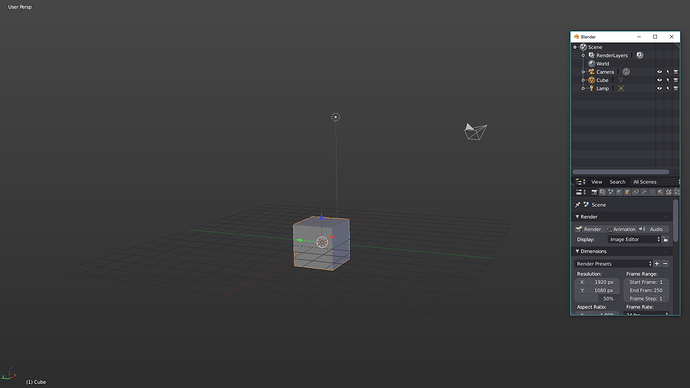 dsfsdf.png1920×1080 117 KB
i don’t know if this related directly to UI or just a minor bug but, in 2.79 i could go full screen(no windows task or title bar) and with one window for(outliner and properties) always on top(using an external app) without losing it’s focus, in 2.8 you can go full screen but window always on top loses the focus and the viewport stays on top of it.
6 Likes
charbelnicolas October 31, 2018, 6:41pm #13

The horizontal scrollbar overlaps items in the outliner

It could use the same margin as the vertical scrollbar to keep it consistent.

If you used Empties to organize objects in a scene, in Blender 2.79 you could ctrl + click said Empty and it would select all of its child objects. This isn’t currently possible, or is it?

With the knife active tool, there is no way to snap the first click to the center of the edge much less any point along the edge or on a vertex and there is no location visual feedback on the first click. After the first point is set, the tool behaves like the old knife operator. But without being able to accurately place the first point, the tool becomes almost unusable since any benefit of this being an active tool is negated by the fact that you have to go back and weld or snap the original point. 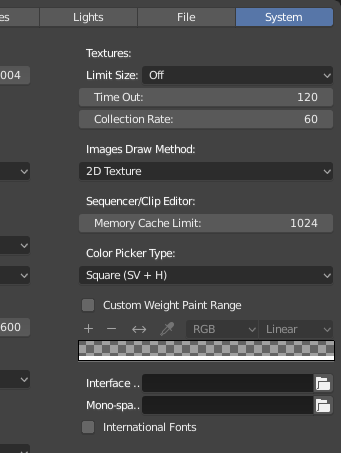 Why is the color picker type hidden in the system settings?
I didnt even knew there were other colorpickers, until pablo mentioned it somewhere - then I was surprised to find it in the systems settings tab. Its also super hidden in a seemingly random list of settings… 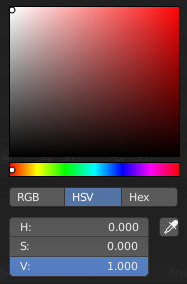 The last used color mode should be saved
Right now it think its stored per session, but like everytime I open up the colorpicker for the first time I have to switch from RGBA to HSV mode. I rarely use RGB values when working with colors, most of the time I want to tweak brightness or saturation or hue - but not the exact RGB values.

While using the text editor / python console area, the mouse otten gets out of the area, which results in typing shortcuts all over the place.

Maybe we could lock the area until we click other areas.

A really simple thing: simply remove the fake “bold” on the title of tooltips. It is just drawing the text multiple times with a one-pixel offset. It looks okay if you set the display scale large (because the offset doesn’t increase), but with scale set to 1 it just looks blurry:

zoom in and you can see what is happening:

This isn’t bold. Just turn it that off and draw that text normally. In interface_region_tooltip there is a section of code at about line 231 that turns text shadow on, sets it to a grayscale equal to the text color, and sets the shadowalpha to 1. Just remove some of that and leave the shadow at 0.

Later on it can be fixed properly. The version of Freetype we are using can now do a better fake bold using ft_outline_embolden, and fake italic using a transformation matrix, but would take more work to integrate it into our text drawing.

These little details remind me of the hundreds of fixes in the fork of Bforartists. <3

Github tracker (200 fixed since they moved to Github)