It have same problems, or worst, that actual system. Why not do something similar to “modifier list” addon?

Nope, it the actual modifiers tab in an official branch.

I still can’t believe. I hope it’s just a work in progress.

@billrey @dfelinto why is this being modified? what are the reasons behind these changes?

It looks broken now, but if you look closely you can see what you can now drag’n’drop modifiers to change their order, no need for old clunky arrows.

It’s the most top requested feature on rcs: https://blender.community/c/rightclickselect/fbbbbc/

I mean if modifier nodes are are the first thing on the list of going node based, why make cosmetic (not functional) changes to something that will have to be deprecated soon anyway?

The Drag&Drop is not the problem, is the general design. It’s harder to read than the actual design or like the modifier list addon. Or that it uses excesive subpanels way making it difficult to use them and needing more screenspace to show the same. for example, the edge split modifier have a subpanel only for one value. We have a lot of complains about that layout in 2.8 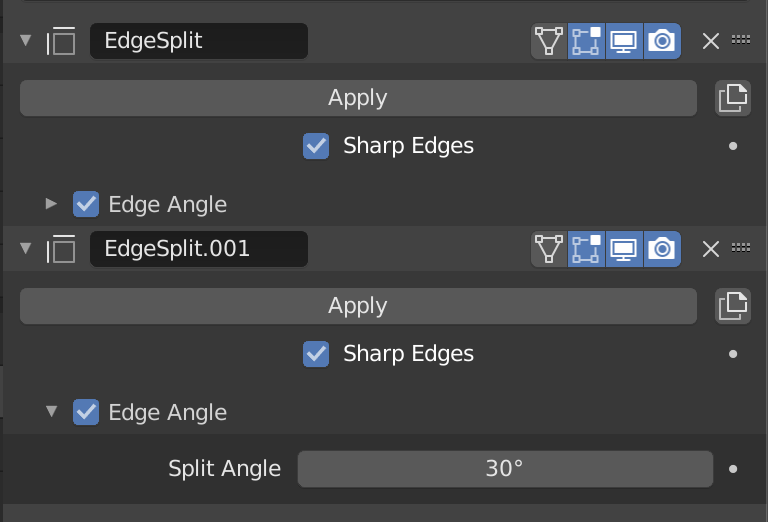 This will be used for constraints too, which will take much longer to convert. Even geometry nodes may start alongside the modifier list, and only fully replace it later.

Thanks for the info

And what’s up with those labels and checkboxes alignment and text on both sides?

This looks really bad. Far worse than the current layout.

On one side, text is a label. On the other side text is name of setting.
To me, that looks like less confusing choice if you want to adopt one column concept to modifiers.
In that case, continuing to add label in a row on top would result into a too long column.

Why not do something similar to “modifier list” addon?

Imagine that you want to tweak a Weight Group modifier that modifies weight of a vertex group used by another modifier ; at same moment, that you set-up that second modifier.
If you want to tweak 2 settings from 2 different modifiers, you will still need to display 2 panels with a meaningful header for each.
So, you have 2 rows in list and 2 rows to name those panels.

Instead if you have buttons like in modifier tools addon to close all modifiers, closed modifiers are not taking more space than list and you gain 2 rows.
And we could have display settings to show only open modifiers and replace a multitude of in between closed panels by a line.

for example, the edge split modifier have a subpanel only for one value. We have a lot of complains about that layout in 2.8

+1. A sub-panel for one value does not make sense.
I can understand the will to hide an array.
But when modifier is only made of 3 settings : user who will want to gain space, will simply close the entire modifier panel.
Here, we have 2 boolean and 1 value. Use of Boolean options is not something that requires minutes of thinking.
If user is not sure about a think and will take time to tweak, evaluate that will be the numerical value.
So, here, what is hidden in a sub-panel is what should be exposed during most of time of setup of modifier.

Imagine that you want to tweak a Weight Group modifier that modifies weight of a vertex group used by another modifier ; at same moment, that you set-up that second modifier.
If you want to tweak 2 settings from 2 different modifiers, you will still need to display 2 panels with a meaningful header for each.
So, you have 2 rows in list and 2 rows to name those panels.

With the new system if you have open a bevel modifier it’s hard than any other thing enter in the properties panel. It’s more easier use a list like modifier addon which has been a great success among users. More if you try to work with 5 or move modifiers.

I am downloading sources of branch. I would make a more in-depth feedback, later.

Bevel modifier is already the longest modifier in master.
I can’t imagine that use of subpanels for it, will make it longer when they are closed.
Anyways, you can’t use that specific case to explain that being able to tweak 2 different modifiers is not efficient in many cases.
For example, to adjust a generate modfier to a deform modifier.

You have to constantly click on the list when using modifiers list addon. It is not efficient.
Reality is that dragging of modifiers is a more popular request than a modifiers list (mainly popular because it reminds 3DSmax to new users).

Are you kidding me? This is the most confusing ui layout ever.
The only good thing about all of this is the drag and drop feature.

We should consider the changes done here as experimental, some (possibly all of it) may not turn out to work that great and there will have to be compromises. In fact there always are compromises to make, hence the experiments.

There is a bit of context to note here:

After browsing all modifiers, here, are my critics and suggestions about current status of branch.

Data Transfer : Exposed settings are not the most important ones.

So, none should be kept.

Normal Edit : Here, again. What is exposed is not the most important.

I would rather put Offset into its own subpanel with vertex groups ; and put back Mix mode,Mix factor and Max Angle as basics of modifier.

UV Project : Projectors list may be increased by user.
That may be useful to create a subpanel for that. But that is not frequent to use many of them.
So, if it is created, it should be opened by default.

UV Warp : Here, also, Offset, Scale & Rotation could be grouped into a Transform subpanel.
Most of time, 2 reference objects (From, To) are only settings precised.

Vertex Weight Edit : I understand that FallOff subpanel is there in case of Custom Curve use.
But for all the other uses, that does not make sense. It is one subpanel for one line.
That is why there is no such subpanel in Vertex Weight Proxility modifier.
Can’t it be possible to have a button to close Curve Widget, instead ?

But I would group things, differently.

Multires : That design is not functional at all.
It lacks of several essential of modifier. I suppose that should be completed.

Skin : Interesting arrangement of buttons. Why not doing that for multires ?

Wireframe : 2 columns + decorators are making names of options unreadable.
You could keep a unique Advanced subpanel and put Even Thickness, Relative Thickness, Vertex Groups and Crease lines in it.

Shrinkwrap : For Project Wrap Method, there could be a projection subpanel to include settings added by method.

Simple Deform : Although that is a coherent grouping, Orientation is a crucial point for this modifier. It can’t be inside a subpanel.
I would rather group Limits, Vertex Groups and Locks into a Restrictions subpanel ; and let Origin and Axis exposed like Angle.

Wave : I don’t understand why same XYZ buttons as elsewhere are not used, here.

Unfortunately the branch wasn’t quite ready for this sort of feedback before it was shared. That’s why there is so much of this kind of feedback to give! I don’t think William or I have fully gone through all the modifiers to iron out issues like this yet.

That said, this is the sort of feedback that’s actually very helpful.

Both settings and Ray Distance could be into a subpanel labelled advanced.

That seems to make sense.

That does not make sense to add a Vertex Group subpanel into Vertex Data subpanel.
…
It is true that situation is different in Face Corner Data. It is necessary to distinguish Vertex Colors and UVs settings when both are transfered.

In this situation I preferred to be consistent between vertex data and face corner data. Although like you say it might make sense to just hide the vertex group settings.

Mesh Sequence Cache
Master puts each of these in a box, and as I hadn’t used this modifier before I figured there might be a good reason for this. I agree though, subpanels don’t help.

Normal Edit
Offset in a subpanel: seems to work
Maybe mix mode could be in the header of its subpanel. I’ll have to try out your suggestions here.

UV Project
Not sure a subpanel for projectors would help here if it’s open by default.

Here, also, Offset, Scale & Rotation could be grouped into a Transform subpanel.
Most of time, 2 reference objects (From, To) are only settings precised.

Vertex Weight Edit
It’s out of scope to add a close button to the curve map widget. Maybe putting the falloff type in the subpanel’s header would help. Although as that’s not done anywhere else it would need buy-in from other UI developers.

Bevel
I like your proposed grouping. I’ll try it out.

Multires
You’re suggesting adding a subpanel for those three options? Keep in mind that would be below the operators.

Two buttons on a row might work here. We don’t want to cram stuff too much though.

Solidify
The main constraint here is the large difference in options for the two modes. A normals subpanel might help though.

Wireframe
The two column layout is supposed to be a “flow” layout that expands to two columns when it gets wide enough. Looks like it’s not working though.

Project
The issue is that none of the project settings apply for other modes. I’m not convinced a subpanel for it is helpful.

Simple Deform
I like the idea of a restrictions subpanel.

I don’t understand why same XYZ buttons as elsewhere are not used, here.

I’ll have to reserve most of my judgement until when it becomes a bit more finalized, but, I agree the “wide” view that was posted by op wasn’t a good first look. Things look a bit better when using more narrow layouts but it’s still not great right now.

A few other pieces of concrete feedback:

UV Project
Not sure a subpanel for projectors would help here if it’s open by default.

I thought about the length it takes when several projectors are used. But you are probably right. User sets that, once and then, you close modifier.

Multires
You’re suggesting adding a subpanel for those three options? Keep in mind that would be below the operators.

I would not mind.

Project
The issue is that none of the project settings apply for other modes. I’m not convinced a subpanel for it is helpful.

Yes. Same as UV Project. Most of animation relative to modifier is probably happening in Viewport.