This work is licensed under a Creative Commons Attribution-ShareAlike 4.0 International License.

Icons within Blender must be used only for functions they were designed for in order to maintain GUI’s internal integrity, to keep good UX under control and to avoid confusion.

I’ve been following your icons development for a while now, amazing work so far!
I posted this in the Blender Artists thread but it got buried over there.

The tool settings icon should not have a wrench in it.
The modifiers tab already uses a wrench and this can cause confusion among new users.

Imagine teaching someone how to use Blender and this happens:
Teacher: “Click on the modifiers tab in the properties panel, it’s the one that looks like a wrench!”
New students will undoubtedly think they’ve found the correct tab when they see the tool settings icon. 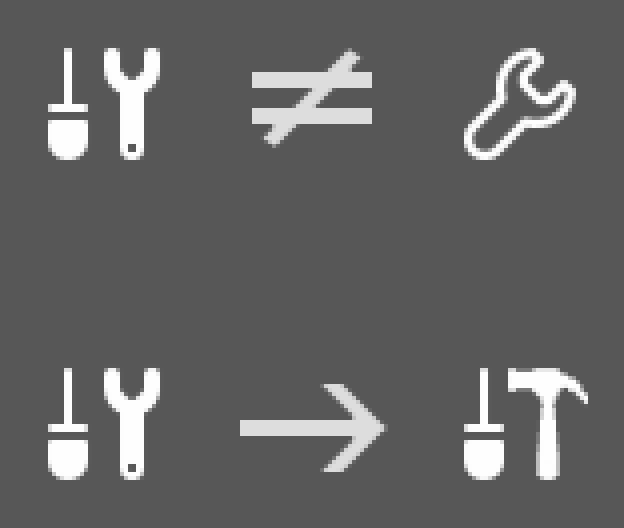 The image I’ve posted here is not meant to be a perfect replacement, it’s just a suggestion for a more unique icon.

Hi there! I know there is a lot of discussion about this, and I’m not sure if/how it resolved, but I’d like to bump the idea of bringing colors back. Sure, it’s technically usable to desaturate the icons, but I think the reasoning is mostly dogmatism. A good color scheme conveys more information in the same space, and allows icons to be picked out more quickly and with less visual/mental effort (not an interface designer, just personal experience with different GUIs that were subjectively easy/hard to use).

SolidWorks 2016 did the same thing, and it was markedly harder to use. People reverted to version 2015 strictly because of the lack of UI depth. That is not to say that people won’t use 2.8, since there are uncountably many awesome new features, but it just shows how big of an issue the desaturation was. The following release of SolidWorks shipped with the “classic” colored icons.

It really is the active tools and workspace settings icon. The gear icon is already used for blender perferences.

[ICON ALERT]
@billrey
icons of Light Probes ObData in the Properties Editor do not change respectively to the type of the Probe. The tab uses always the Reflection Cubemap icon even if the Probe is a Reflection Plane or an Irradiance Volume. It’s not consistent with the way Light ObData works (different ObData icons for each type of light).

So after a couple weeks using the new icon set it’s basically been ok (easy adaptation everywhere really) except for one particular set of 3 icons… I’m posting now because for the 5th time just tonight I’ve clicked the wrong icon; and I don’t really know why as I’ve had weeks with the program now.

The cluster of 3 property icons for Constraints, Modifiers, and Object data is a cluster @&!% for me :-/

Most of the time I’m looking for Modifiers but I nearly always click the Constraints button instead. I’m always doing this in a hurry and those 2 icons, for me, don’t offer a good visual target for me to narrow in on. I think this is due to Constraints and Modifiers sharing the same visually-sloped motif (lower left to upper right). Like seriously, I’m not kidding, the number of times I’m opening Constraints per-day is more than I’ve ever opened that panel in 2.7x

Is there something that can be done to maybe change the Constraints icon or shift Modifiers somewhere else in the list so to give it a more distinguished hit target area – without color I’m just eye glancing and not spending time reading shapes since most of the time I’m concentrating on something else.

I’ve also mistaken Object Data for modifiers too but I can’t explain that. Though I would like to say it would be nice if Object and Object Data property icons were next to each other. Why shift Object Data so far down; I know it’s not the icon sets fault for that.

The last update of the icon set introduced a clearer visual distinction of the Modifiers icon. The new pictogram is in branch now. As for the location of the ObData tab right next to the Object tab - I share your opinion, but without being a developer I have no real influence on these issues.

@jendrzych Do you have a reference sheet for all the new icons and their names?

Nope. But I guess there’s one somehere in the build resources. Look for something that’s name reads “list of icons.txt” or something like that.

You mean the filled wrench icon now versus the old unfilled one? Yeah, that hasn’t really helped as I’ve been using that new build for past few days. I think for me it’s really because both icons are slanted in the same direction perhaps.

We could also make it so the light tab doesn’t change icon depending on the type. Perhaps we could use a generic bulb icon for the Light Properties

I find it very helpful to have an ObData icon reflecting the light type. Especially when you’ve lots of lights of different type in a scene. Would be super good do get this for Light Probes as well.

P.S. is there a chance to get ability to upload an *.svg in this forum?

I agree with @billrey.
Having the same global generic icon is easier to find and memorize where you have to go to edit light settings (no matter if its a sun, a spot or a point light).
Even in outliner, the icon on the left of the light name is always a generic light bulb. I just think that the concept should be consistent across the interface.

My point is there an advantage in having the icon change each time?
I guess no, but if yes this should happen to all other tabs too.

Yes the issue is that if we did that, users would have to learn and memorize a lot more icons. The simplest solution is simply to make it so the Light Properties uses the generic bulb.

Have to get back to dhe drawing board then. Light Probe ObData needs better pictogram.

What if the Light Probe got one of theese pairs?

Object on top, ObData on the bottom.
The right couple is consistent with the set of Light Probe type icons while has quite unique shape, therefore I find it a bit better suited for the function. On the other hand the left pair looks more like real light probe, but the shape is too much similar with the Shader/Shading icons…