I’m Alexia and I would like to work on the quicks favorites and menu editor idea for the google summer of code 2020.
I’ve made a draft on google doc and have sent it on the GSoC website yesterday.
You can have a look here

I’m looking for feedback and I would like to know what do you think about my idea to extend the customizable menu to the displayable ones ?

Thank you very much.

Seems like a great idea. Sounds like it leverages a lot of useful features from other software that I miss and I know others miss as well. One of the top things I see people coming from other software wanting is their own customizable shelf (like in Maya), and also the ability to make Pie Menus (like in Modo).

As a stretch goal, it would be cool if you could take the text in Blenders script editor and make a button for it on a tool shelf too.

Hi! I would like to know if you’ve gotten any updates on this.

I really like the proposal! For different users I can imagine users it should be still possible to add something into the quick favirote menu without sorting it somewhere. Would this be still possible in your proposal?

As a stretch goal, it would be cool if you could take the text in Blenders script editor and make a button for it on a tool shelf too.

It’ s a good idea, I thought about macro, which are combination of operator, but using script directly might be a better idea.

Hi! I would like to know if you’ve gotten any updates on this.

official proposal were 31 march so there is no updates. But I’ll still take feedback in account when I’ll work on the project. (if you’re asking since the first post the 18, there has been one the 28)

Alberto : I don’t really understand what you said at the beginning, but for the rest, Top Bar is an interesting idea.

If you speaking the right click -> add to quick favorite : yes, I’ll make sure you can still add stuff this way.

Alberto : I don’t really understand what you said at the beginning, but for the rest, Top Bar is an interesting idea.

I don’t remember what I told with “quick favorites menus”, anyway. Where is really interesting this idea is in

I think a lot of people would thank you if you would put a quick method of organizing/customizing addons sidebar in this project, it is very unusable as soon as more than 5-6 addons are activated. … after all it is a kind of menu customization… and if it were possible with drag and drop it would be the top, but maybe I ask too much.
By the way, welcome and good luck with your project.

So this is not just for quick favourites but also for cutsom menus?
I made a suggesting for something about this but for the sidebar or in your case looks like a custom editor, not sure if the Devs like the idea or not but i do hope if you can take a look at it and see if it can be combined with your proposal to be a more elegant solution…

as you know Blender sidebar suffers a lot from too much addons that are put there with no regard to the clutter & the scrolling they add.

I made a quick mockup for another idea, basically having only two sidebar “header” tabs. One for the regular sidebar and one for custom, it’ll probably take a bit of space but it’ll give more flexibility as you can put more addons there or when there will be the possiblity to pin or drag & drop favourite panels and with the dropdown list added it’s even more flexibility ,similar to what other Softwares like Maya have. [Side] PS; we could even add icons to both tabs so when the panels size is …

looking forward for your project to be a great success, Good Luck.

Are there any usage statistics about the Quick Favourites menu? How many entries do Blender users usually add into it?
It would have been interesting to see an option in Blender to record some anonymous statistics related to UI usage.

(Just an idea:) Allowing the Quick Favourites menu to feature (up to) 3 columns could be a solution to avoid having a very tall menu.
With a layout a bit similar to the RMB-click menu (3 columns): 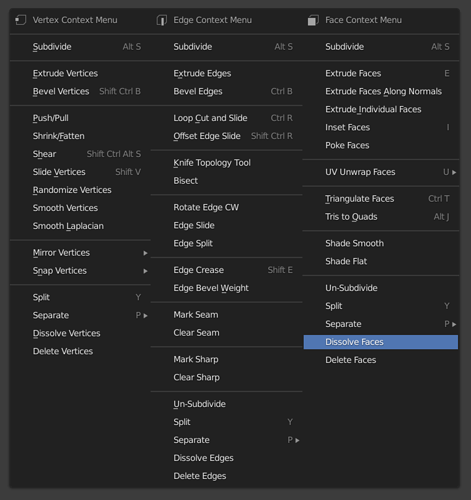 (Another idea:) Allow to make the Quick Favourites Menu different on each workspace.

Everyone is invited to test this build (and report bugs):

This is a daily build of the `soc-2020-custom-menus` branch, will automatically update daily given the branch both builds and had code committed. For feedback on this...

Actually is really alpha to give opinion. Some names are incorrect and it don’t work. But the idea of more than one custom quickfavorites menu is a good idea.

Hi Alex, I went through the proposal and there is one more thing I would like to suggest that I haven’t seen mentioned in here but has been extremely useful for me. I would love to see the “Stack key” functionality demonstrated in this addon implemented.

Stack keys basically execute a set of commands from a list one by one while pressing the same shortcut key repeatedly.

Another useful thing is the option getting announced on the screen, top section of the viewport in this case. I think it would be a neat feature if my short demo is anything to go by since stack keys don’t incorporate a menu.

EDIT: Imgur link for gif since it doesn’t seem to scale properly

This seems like a fantastic idea, hope to see that in future builds!

I’ve done a lot of work with pie menus, and I appreciate the challenges of trying to make an editor for the circular layout of pie menus, using linear scrolling lists and trees.

Ages ago in another lifetime, I made an implementation of pie menus for ActiveX / OLE, which you could use in Internet Explorer, Visual Basic, and other OLE containers.

It had a rather elaborate set of tabbed property sheets that let you edit and preview them in various ways, but I was never very happy with it, since there is such cognitive dissonance between the automatic circular layout, and the scrolling list / tree controls.

So I made a preview tab that showed how each menu would look, but that was not directly editable via drag-and-drop.

But Simon Schneegans’ Gnome-Pie application launcher has a wonderful drag-and-drop pie menus editor, that you should definitely check out:

Homepage of Gnome-Pie, the slick application launcher for Linux.

But one thing I tried that worked pretty well for both pie and linear menus, up to a point, was editing a tree of nested menus in a regular multi line text editor, as an indented text outline! The ActiveX pie menu demo shows how that works at 7:15. That was an idea by Arthur van Hoff, which he implemented for the HyperTIES user interface builder (which was like HyperCard in NeWS PostScript).

It’s very simple and easy for people to understand and use (nothing to learn since everybody knows how to use a standard text editor and indent text with spaces, and very easy to code), and it takes fewer keystrokes to create and edit a tree of nested menus, than it would take by clicking through tree controls and dialogs.

Its limitation is that it didn’t let you associate properties with each menu item (since there was no way to express it in the text outline, that information could not “round trip” between the text representation and the structural representation).

Of course XML (or JSON but it wasn’t a thing at the time) is the obvious way to represent both text and structure. But then you’re using XML, and nobody wants to edit that directly.

But I think it’s worth considering using simple text outlines in a standard multi line text editor as a way to quickly input and edit the initial tree of menu items.

And if you really wanted to make it possible to edit the menu tree structure in the text editor without losing the formatting and other information on the individual items, you might do something like appending an id tag like “#1" to each line, to associate the text with the metadata (formatting and layout properties, callback, etc). Or maybe you can come up with a better solution, or use a more advanced editor that can handle properties, instead of a standard multi line text editor.

Perhaps you could indent properties below items and prefix them with a dash, or use something like yaml. But I think it would be better to stick to a super simple syntax designed specifically for editing menu trees as much as possible, because yaml is actually quite complicated and quirky and a bit of an overkill (with a lot of the same problems as xml or json).

@Tempo my suggestions are already in your todo list. Thankyou so much for doing this great work for blender and community.

One of the most anticipated features for me. More control over excellent Blender’s customization is what makes Blender imba!

I’m viewing the images in the weekly report and the first thing that comes to my mind is - Wouldn’t it be easier for you and visually more logical to use something like the tree view in outliner or keymap editor to edit the menus?
Drag and drop to rearrange items would be appreciated

@Tempo any updates or new builds i can test.

A lot of people are asking about addon management and/or topbar/sidebar. I am before all working on the basis of the editor so I don’t think I’ll be able to do much more. (it’s still good to propose and give your opinion thought as your idea can be implemented in the future, and by other developers.)

@johnsyed
It took me some time to implement the possibility to work on differents user menus but now it’s done so new features might come soon and more often. You can take a look at the weekly reports if not done already to stay updated.

Thank you for all the support !