'Lock Camera To View'... It was torture to find it!

I am a very new Blender 2.8 user (one week old) but i work more than 15 years in film production and digital VFX.

I only had a brief experience with Blender, 7 or 8 years ago, when the UI and workflow looked too alien to me and decided to skip it as a production tool until very recently. Listening to all the buzz about 2.8 i decided to give it a second try and my opinion on Blender had a complete reversal. Blender is amazing! Probably it always was but now it is intuitive and friendly for anyone not familiar with its intricacies. When the stable release is out i will definitely push for it for production work.

The reason i decided to post here was because i spent 3 days trying to figure out how to frame the camera while in Camera View. Something so simple that i can immediately do in most other 3D software i just couldn’t figure out how to do in Blender. I couldn’t even find the information about it in the Help files. It was frustrating and infuriating! Mostly because everything else in Blender is so well thought out in 2.8 that i could figure out immediately.

So, days later i watched an unrelated video on YouTube about Blender 2.8 and to my surprise the user opened that cryptic side menu and clicked on that Camera Lock menu! It was a revelation! But it shouldn’t be like this.

For video and animation oriented professionals, camera handling is one of the most basic things that need to be immediately accessible. My suggestion is that when the user is in Camera View, the Lock Camera To View option should be immediately visible somehow and not hidden in another UI layer.

That was my two cents of thought!

I am happy to join this fantastic community!

Exactly.
This is a long time unheard request. The camera controls are spread all over the place unfortunately.

In fact neophytes find it extremely difficult to move the camera when it is framed in sight. What they find difficult is to select it to move it backwards or find the command “target to the object”, to make the camera rotate around the pointed object.

How can I give an exact size to the final rendering in layout mode, without having to go to the scene menu and change the size of the final image? , what I do now is enter camera mode, press ctrl + b and select what I want to renderize. but in doing so, what you select is rendered and the rest is transparent with the full size of the image. I hope I have explained correctly.

Perhaps it is the easiest/simplest things to implement that go unnoticed sometimes!

Camera handling is extremely important! I am actually surprised that this is a long time unaddressed request.

There is plenty of space in the current UI to add simple camera handling buttons. The ‘Lock Camera To View’ should definitely be visible when Camera View (0) is selected. 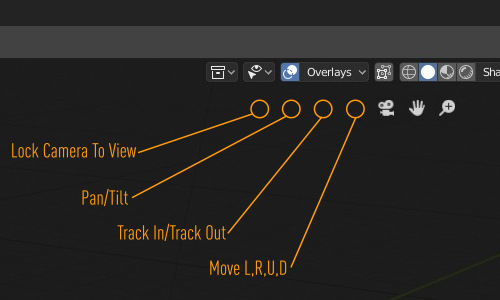 There is also space for the most necessary Camera control handles:

Those should be enough for everyone to frame the camera exactly where it is needed in any given scene. Artists without a numpad or middle mouse button would also benefit from this.

Hi, there are plans for something like this: https://developer.blender.org/T57234

There are good points made in that Task Discussion! Camera selector being one of them!

I am so looking forward to this materializing!

In case anyone is actually trying to find the “Lock Camera to View” mode check-box, as of Blender 2.82 it can be located via the following steps:

Yeah it is a bit hard to find for such a useful function.

Thanks for that. I was actually searching for this very thing earlier today!

It is funny how the camera controls are still so hidden. It is one year after this discussion started and nothing seems to be improved on this subject.

It’s an ongoing mystery what the UI designers of Blender are actually working on.

Here is a similar thread on the subject (which should perhaps be merged into this one @MetinSeven):

Currently the way you enable Lock Camera to View has a few flaws: Most importantly, lack of discoverability for new users ! Since the camera doesn’t move by default, new users will click on the camera icon and then not know how to move it. This is not good ! It will give newbies the impression that Blender is harder to use than it is. Requires 3 or 4 clicks (hit N to open the side panel, click to select “View”, click the “Lock Camera to View”, hit N again to close it) instead of 1. The N pan…

Currently the way you enable Lock Camera to View has a few flaws:

The obvious solution is to get rid of the hidden Lock Camera to View checkbox and replace it with a little padlock icon somewhere outside of the camera frame in Camera View, which prevents the camera from moving. 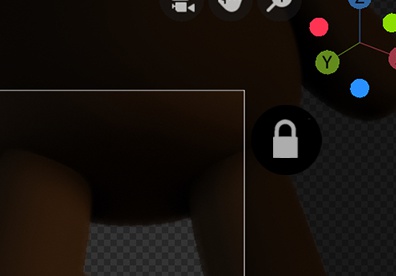 This would be more intuitive, less clicky, and easier to see at a glance whether or not you’ve left it on.

2.82 has very nice new “warning” icons for settings that you might have forgotten that you enabled in the modeling and sculpting workspace, specifically x-mirrors, vertex merging and dyntopo.

But unfortunately, this year old suggestion was overlooked for the layout workspace. I would like to add to this that the auto-key should have a similar prominent “warning” icon. Actually, ideally, the “lock camera to view” (and “auto key”) warning should look something like this: 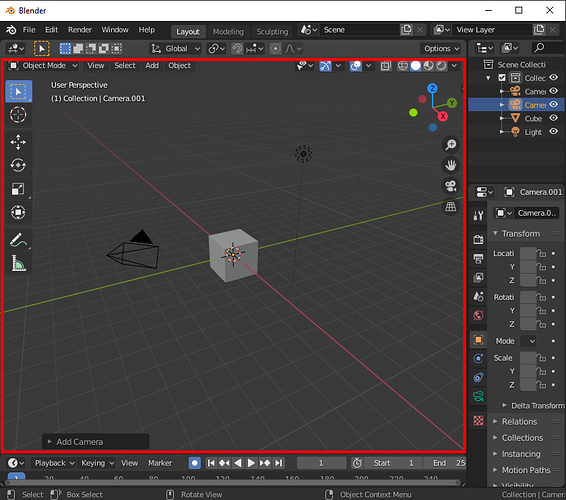 But to keep more with the 2.82 theme, perhaps it should look something like this:

Sure. Merged those posts into this thread.

Thanks for sharing my thread. This is a big pet peeve of mine and I really hope they change it soon.

As a workaround, I recommend saving “Lock Camera to View” to a Quick Favourites menu so you can quickly turn it on and off by hitting Q. It’s still pretty easy to forget when you’ve enabled it, though.

I wouldn’t hold it against the developers for not implementing it yet. On the whole, they’re incredibly good at responding to user feedback, especially compared to paid software.

Yes, thanks! So many improvements, but muscle memory is still a challenge!

Agreed. I seriously doubt I’d find this important feature if I didn’t know that it was in the previous versions of Blender. It was such a relief to find out it didn’t go missing. The “cryptic side menu” description helped a lot, thank you.

I don’t know what would be the best location for the option, but I’m not sure it’s a good idea that it will be easily accessible in Viewport where you could accidentally enable it.

Yes you do.
This is related to the view, obviously it should be in the View menu, AND enabled by default.
Blender is the only app that does this weird “orbit-the-view-get-out-of-the-camera-view” thing.

This is related to the view, obviously it should be in the View menu, AND enabled by default.
Blender is the only app that does this weird “orbit-the-view-get-out-of-the-camera-view” thing.

I can’t even believe this is still a subject to debate about. There is no other reason to choose Camera View other than checking what the shot looks like and make adjustments if needed. What you described should be the default behavior.

Miltos, youre making great points - Im doing 3D for 23 years now and Blender, even with the huge jump with R 2.8, it`s such a mess…

Initially, regarding the topic of this thread, I was slightly reminded of the Nuke “lock view to camera” or the tick box executing the same function in Houdini - only that it is on the same drop down you select the camera with. But hell! All the other things are all over the place in Blender.
The camera properties and the render settings AND the output settings are split into separate panes - while this is useful in general, it doesn`t totally make sense for specific functions that are fed by settings in other menus and areas of the software, like depth of field. Then you have a view menu on that roll out on the right plus another one on the left. Another thing that makes my blood boil is the stupidity of some hotkeys - the function that gets rid of the nonsensical, comically gigantic default “passepartout” around the cameras actual view is on the “home” button while youre using the blender standard keymap. Switching to industry compatible this feature in nowhere to find. So the obvious workaround is to switch between key maps to catch this function. And btw, in the left view menu, clicking the “view all” function actually performs what we know as “frame all” - while this command seemingly is assigned to the “home” button, too - WTF?!?!?

Really, the possibilities with Blender are amazing, but the UX is sooooo messed up…yuck…