Here I will be posting weekly updates about my progress on implementing the various knife tool improvements outlined in my project proposal.

If you want to share feedback you have about my project checkout the feedback thread.

In the weeks running up to my official project start I have completed the following:

For the rest of this period I intend to:

The branch soc-2021-knife-tools has been created and I have spent the past week implementing the following features:

Lastly I spent a short while looking into code for next week’s plans. Specifically relating to visible distance and angle measurements for the knife tool. 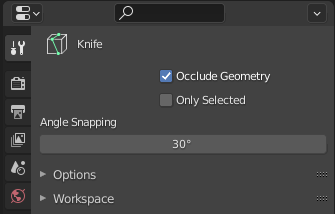 This week I focused on adding visible distance and angle measurements and also made some small improvements:

Next week I am going to finish implementing the visible distance and angle measurements in the first few days and spend the rest of the week looking into small improvements I can make and some user requests.

This week I finished up the visible distance and angle measurements, added a few quality of life improvements and implemented a new local constrained angle mode:

Next week I will be start on implementing undo capabilities for the knife tool. I expect this to be a difficult task and will likely take at least the entire week.

I spent the first half of this week studying the knife tool code to better understand how it stores data about the current cut, in preparation for implementing undo. Eventually, I had a rough plan and got started implementing it over the last two days. This report will contain a short preview of undo and notes about other changes I have made.

Following a lengthy discussion on the feedback thread, I opted to commit the following changes to the default modal key mapping for the knife tool:

The aim of these changes is to consolidate the default modal keys towards the left side of the keyboard, improving the workflow and efficiency of using the tool.

When cutting one segment at a time:

This week I spent the majority of my time finishing up undo functionality. I had a lot of trouble with various bugs that existed in last week’s implementation as well as tackling the reversing of edge splitting. I am happy to say I have since committed a nearly fully working version of undo.

I have a few questions I would like to get community feedback on. Please share your responses in the feedback thread.

This week I worked on a lot of small quality of life improvements and bug fixes relating to the features I have implement so far.

Next week I plan to implement snapping to a given distance and add support for multi-object edit mode to the knife tool.

Toggling on and off Depth Testing:

Great improvement, I have a suggestion, can you implement this feature from “PolyQuilt”?

I like the idea of having configurable snapping increments along an edge as you show. However, I am not sure if there is enough free time in my project schedule to add this feature. If you submit it as a feature request to rightclickselect maybe I or someone else in the future will be willing to spend some time to implement it.

Thank you, I submitted this idea 1 year ago ( Right-Click Select — Blender Community).

This week I almost solely worked on multi-object edit mode support for the knife tool. It proved more challenging than I initially expected and I spent a lot of time trying various ideas for implementing it. In the end, I found a solution I was happy with and have committed it to the soc-2021-knife-tools branch.

Next week I am going to add multi-object edit mode support to the knife project tool and an edge removal mode for the knife tool.

When two objects intersect the object to cut is based on the nearest mesh edge to the cut start:

Why not allow cutting on all selected objects ?

I realise it would be miles better to be able to cut on multiple selected objects with one cut and I am unhappy that it does not. I should have clarified why it only works on each object seperately in the report, so I will do here.

Mainly, it is a limitation of the way the knife tool is already designed. Without going into too much technical details (unless that is preferred?), to have a semi working version of the knife tool in multi-object edit mode completed within a week I had to implement it this way. I believe the way the knife tool currently works would have to be massively changed to allow cutting of all objects with each cut (a similar problem is this) and I am not familar with the areas of blender’s codebase that would make this work.

I am sorry I could not deliver a better version where all objects could be cut simultaneously. I hope at least I was able to lay a foundation for someone with more experience and more time than me to come in and rework the necessary things to make the knife tool work in such a way.

Oh don’t be so apologetic, it’s nice as it is already. Thanks for the explanation, yes it is super interesting !

After receiving feedback on last week’s report and discussing further with my mentor we have decided to make some changes to the plan for the remaining two weeks of the GSOC coding period.

I will now be releasing a build of my branch soc-2021-knife-tools each week for everyone to help test by searching for bugs and provide feedback on the features I have implemented.

Please share any feedback you may have on my feedback thread. I will work on fixing any bugs found or making any suggested improvements over the next few weeks, alongside the plan discussed below.

Based on feedback from last week, I am going to spend the rest of the GSOC period focusing on re-implementing a better version of multi-object edit mode support. The goal is to allow cutting across multiple objects in the scene and making cuts from one object to another. This will require a complex re-write of large parts of the Knife Tool code but should make it possible to implement much more useful features in the future as well.

The plan to implement edge removal mode has been abandoned as it seemed a rather niche feature now that undo is implemented. It also became clear that multi-object edit mode support for the knife project tool already exists in that you can use multiple objects for projection. There is no way to differentiate between objects being projected onto and being used for projection and so this feature is not necessary.

The GSOC coding period has officially come to an end as of this week and I have posted my final report over on the wiki. I apologise for the lack of a report last week, I spent the entire week working on a foundation for better multi-object edit mode and decided it was best to wait for more feedback about the build that I posted before making a report.

This report contains a list of various bug fixes and additions I have made as a result of feedback about last week’s build as well as a new build for testing. I will also discuss the plan going forward.

Now that the official coding period has come to an end I will no longer be implementing any new features. My plan now is to spend some more time fixing any further bugs / minor improvements given as feedback about the latest build. I am going away on holidays this upcoming week and so will be slow to respond until after I return.

I will also discuss further with my mentor about continuing work on a better multi-object edit mode as well as beginning the process of merging my changes into master.

The new build of my branch soc-2021-knife-tools is now available on: Blender Builds - blender.org

Patch notes since the previous build are outlined below and once again I would appreciate it if you shared any feedback you may have about this latest build on my feedback thread. 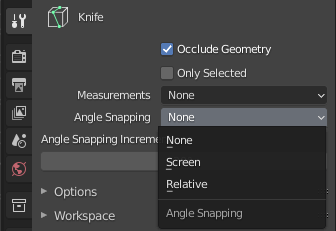 congratulations! Great to see the improvements in your reports

Over the coming weeks I will be focusing on responding to and fixing various bug reports that come in. If you find a bug with any of the changes detailed within this thread then please submit a ticket on developer.blender.org and tag me as a reviewer (otherwise tag the project as modelling). The latest build of master can be downloaded under “Alpha” on Blender Builds - blender.org.

A variety of changes and bug fixes have been made ahead of merging into master. The largest change has been the addition of a better multi-object edit mode. It was clear from user feedback that my previous implementation was unsatisfactory and so I set out to make it work as expected.

Orientation Snapping w/ Multi-Object Edit Mode
Takes the local orientation of the object the cut segment was started on:

The one change I did not manage to complete is in regards to relative angle snapping. As it is in master, relative angle snapping is still limited to the existence of an adjacent face to the relative edge which is being used. This is not the greatest implementation and will need to be updated in the future, but as it is it does still allow for making more precise cuts.

There are also still some minor visual bugs with orientation snapping which will be fixed soon.

Lastly, I just wanted to say I have had an amazing time working on Blender and thank everyone for their support. Seeing the things people create with Blender is one of the best parts and I intend to continue doing what I can for Blender when I find time!