In order to get the much needed discussion on what tools to implement in the new VSE toolbar started, a grand design of the toolset is needed, so here are some thoughts on the topic. 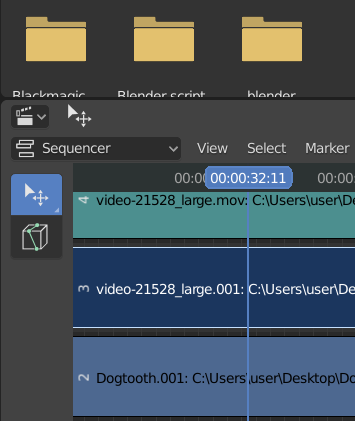 As Davinci Resolve pretty much has picked most of the industry standarts of their newly implemented NLE editing, it might be worth to look at it for inspiration. In order to quickly understand the basic concepts industry standards of active channel, in/out markers(in source and timeline), trimming based on mouse cursor position(not selection), preview while trimming, ripple(delete/insert), overwrite, swap, razor for cutting continuously, snap mode and link(parent) mode I strongly suggest to watch this video: youtu.be/yVyrcH2DUkI?t=40

Which boils down to this very effective and uncluttered toolset:

Which could lead to the following tools in the Blender Toolbar:

Notes: I’m not sure transitions or modifiers would work as tools since they are only added sporadic, so either by fade points in the strip or adding them in the context menu would be more fitting, imo. Is there a need for an annotation tool in the sequencer-timeline?

Besides these mouse executed tools, we should have all the single execution functions(selection based) in the menus with shortcuts.

Some of the main questions:

I’m all for this and our initiative.

Some of your questions are partially implemented, like you can drag a timeline on a clip and you’d only see that clip - but other things could be added.

Great. Let me know which toolbar entries already have elements implemented, so I can add it to the list. It’ll be helpful to estimate the effort needed to do a full implementation.