Will metal be implemented in the whole software or just cycles? Will the metal version have hybrid rendering or other optimisation that you could share? Thanks in advamce

Is there interest in supporting a Metal version of Cycles for MacOS? Cycles Development

Thanks for the feedback - we are certainly intending to support Blender as a whole, and our teams are focused on the overall workflow experience of using Blender on Mac and how that can be improved. On the technical side, we’re ready to talk about Cycles on Metal, and get that tech contributed back smoothly for the 3.1 release.

Is MNEE the same thing as Path guiding?
I saw path guiding is on the Cycles X - New Features list.

Edited 5min later:
I saw this video in youtube telling that they are two seperate algorithoms and Path Guiding converges way quicker than MNEE.

I asked Brecht a while ago, he said Path Guiding and MNEE are complementary, so we can have both.
Also I think the video mentioned NEE not MNEE

Thank you for your explanation! It’s exciting to have the two methods both contributing to caustics rendering

What is the more efficient speed of the 2 algorithms, path tracing and menn?

In equal sample situation, the paper says it’s 3 times slower, but equal noise (which is the case now in 3.0 with Adaptive Sampling) should be much faster 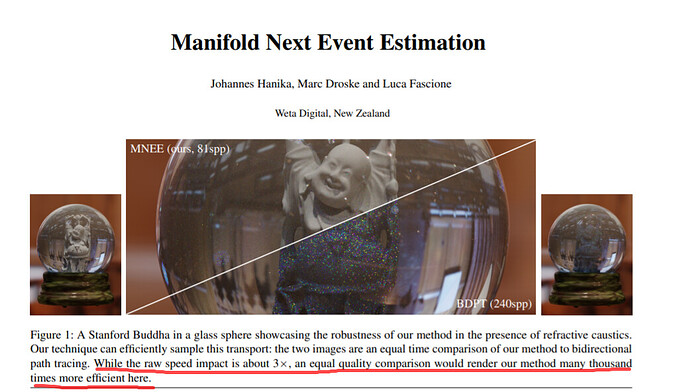 Will there be driver support hip before November 9?

We don’t have an exact date for when this will be finished yet.

Hey Brecht, It’s amazing to see the Depth Denoising pass restored and No AA on the position pass! We have already started using the non-AA position pass right away.

However, I’m not sure if it’s a bug or if something has changed, but I can’t seem to get the denoising depth pass to appear in the compositor in any of the latest daily builds.

What is the Status of AMD GPU Support in blender 3.0 ?

There are supported rc drivers released in November, currently discussing those models of graphics cards can be enabled, this is the latest I know

At the moment code for AMD GPU support for Cycles via HIP exists in Blender 3.0. But it is disabled by default and will probably remain that way for the official release of Blender 3.0.

You can compile Blender 3.0 for yourself with HIP enabled. However the tools for doing so on Windows are not currently avaliable (Expected to be released some time in November). The tools for compiling Blender with HIP on Linux are avaliable, but every person I’ve seen attempt it has come accross some issue of some kind that stopped them from getting a render to work. It’s possble the cause for the issues people faced are caused by HIP on Linux, or the GPU drivers on Linux, needing to be updated to support the code in Cycles or the code in Cycles still isn’t finished yet.

The other limitation is that by default Cycles only generates binaries for RDNA2 GPUs and newer. Investigations are underway to see if older GPUs can be supported.

So this is going to magically work without users testing and reporting bugs directly at release ? Very strange development protocol. Don’t really care about propriety OSs ( That is the price you pay for using Closed Source )

From my understanding HIP won’t be avaliable with Blender 3.0. HIP will PROBABLY be enabled in Blender 3.1 before BCON 2 and will under go testing and bug fixing throughout the rest of 3.1’s development.

Thanks Alaska.
I had problems with newest AMDGPU-PRO drivers on Debian due to some bug in LLVM11. Recently LLVM was upgraded to 12. So that might be useful for testing newer drivers and compute stack in this distro.
If I’ll be able to install recent drivers, I’ll definitely give HIP a shot on Vega II.

If I’ll be able to install recent drivers, I’ll definitely give HIP a shot on Vega II.

So far it seems things aren’t working as expected, especially on “older” GPUs, but that’s based on the results of others. So I’m not sure how right this assumption is. I would recommend you wait until official instructions on how to use and setup HIP in Blender are made publicly available.

I’m sorry I can’t help you much. I have personally never used a AMD GPU on Linux and so haven’t faced the problem of OpenCL not being detected. However this thread might contain some useful information: Guide | Install AMD OpenCL on: Pop!OS & some Ubuntu Derivates | Linux, amdgpu, amdgpu-pro, rocm, rocr

As for the HIP implementation, it is disabled by default and is thus not accessible to the end user. However you can compile Blender with HIP if you want to test it, I’m just not sure if it works with the publicly available GPU drivers and HIP compiler. You should wait until official build instructions are released by AMD/Blender developers.