Right now in Blender 2.79 when you have a more or less big scene the Undo is SLOOOOOOOOOW, while in other packages in general this is not the case (I know compairing with other softwares is not the best description but I don´t know how to say it)

For example in my current scene if I move an object in the scene and I want to undo that movement i ttakes 45 seconds!!! and it´s just an object movement, If I have to adjust several objects and do several tries, etc, etc… the undo is completely unusable.

I have some questions on this matter:

Do you have a way to solve this?
Is 2.8 better in this regard?
Is there something planned for the 2.8(1 or 2) to solve this problem?

Other softwares have very different undos. I think Maya (if i’m not mistaking) has a very light performance impact while undo, even on large scenes. And it also have an option to get rid of the limit number of undos. Infinite undo. Any idea how that is done and if it would be possible in Blender ?

At the moment there is no project underway to improve it and 2.8 should be about the same as 2.79, though it’s certainly possible to improve this area.

I´ll post the improvement in right click select and see if people agree in that this is important in general for everyone.

For me undo is completely broken, even a simple translation cant be undone without the risk of strange things happening.

Not that in this case its any effort, but this is a real deal-breaker for me to start working with 2.8.

I honestly am wondering how anybody can work with the current state of the undo system or how anyone can say that its behaving like 2.79 because it clearly is not.
In 2.79 undo was already weak, but at least it was consistent and somewhat reliant which i can not say for the state of undo in 2.8.

See if global undo is unchecked in preferences > system. Having it unchecked produces results similar to what you are describing.

Not sure why this setting is exposed at this point. It should be renamed “Make My Life Miserable”

it seems that option does not exist any more or was moved to a place where i cant find it. i was looking for the undo options for a while now but they are not in the preferences any longer. 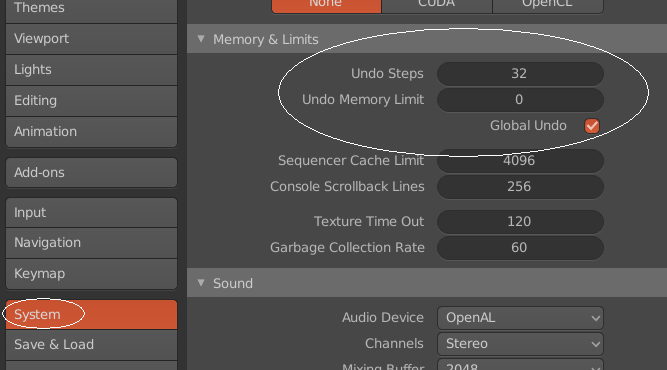 how could i miss that, of course i would need to search in the memory section. Thanks for pointing it out.

Unfortunately it does not seem to change the behavior at all, its the same broken story for me with global disabled.

This is absolutely something that should be improved in Blender. Undo is waaaaay too slow. It’s really weird you can easily select and move around objects but just tapping ctrl z can take almost a minute for the application to process the action. Clearly something inefficient is going on.

Yes, it needs to be improved.

For me it behaves more or less like 2.79, but it’s one of the worst things in Blender, specially because it gives you fear to undo things.

Having to wait 1 minute to under the movement of a box in a complex scene is not good.

Let’s hope this gets improved in 2.81, I’m not saying it’s easy, but is something needed to work in big scenes.
The main point here is that long-term Blender users are used to it and try to avoid undo as much as possible, so is something that I think has not been aske before too much.

I agree with this, this is one of the most important features in my opinion. Working in big scenes is getting frustrating really fast. Without undo-history it would be almost impossible to work properly in big files.

All my cgi people at work who use c4d, see blender and would like to give it a try,
but without propper undo it’s a nogo for them. Even when they are really jealous about eevee

I know this isn’t a easy task, but I would like to see everyone in front of blender!!!

i just encountered a non linear undo in the text editor as well, for some reason this is dependent on the mode of a object so when i write some code in the editor, switch a object into edit mode and do some changes, switch the object back into object mode and use undo it will jump back to the changes that have been done when the object was last in object mode and all the code written during edit mode is lost.
this is a unpredictable and unexpected behaviour and needs to be fixed.

why I suspect that this very slow undo … has something in common with performance issues in edit mode with heavy geometry ???
my intuition must be coordinated by a demon that peeks into the future, there is no other explanation

AFAIK th inefficiency of the undo happens because it makes a full copy of the scene in memory, or something similar (maybe not the FULL scene, but is what I heard) so every time you are doing an undo what you are effectively doing is re-loading the scene in it’s previous state, so big scene, big load time

i made a test with earthquake from zbrush that has 3+ million polys, the thing that i noticed in 2.80 the viewport performance is much better than 2.79 even in edit mode/wireframes, however (de)selecting/moving components and undo are the slow parts…i think there is a huge room for improvements even beyond 2.79 level.

nope, not exactly, slow performance while editing big heavy performance is not related to undo, it may be related more to with in which way geometry is internally handled, for example in sculpt mode you don’t have problems dealing with 10 millions of polys, but in edit mode you may die in the try.

no of course, it is not related to the undo, I was referring to the “blender” approach to keeping everything always connected, so the result is that both for the undo and edit mode, bad performance, also if it is a matter of “moving or undo” a few points of geometry, the calculations become lag and expensive if the scenes are very large.

in the undo, I presume, it’s like every movement history, blender takes into account all the objects and all the geometries instance, while of logic it should memorize only the history of what “points” is edited and only this … and therefore from here, it is presumable , which especially for the edit, blender creates historical instances of undo, for the entire geometry “interconnections” that recalculate for each undo step, just as it does while you move the points by hand in edit mode … and not just those few points edited

Blender 2.8 looks for me like maybach without the wheels with this issues like broken undo system and confusing outliner which works not you expect

I think problems like these should be fixed first.

@nokipaike i think that’s how maya does it, so if you load a file it prepares for edit mode and the memory that it takes is doubled compared to blender that only happens after entering edit mode, this makes switching between modes seamless and the undo is instant.the only downside is how big your selection is, if you select small chunks then no problem but the bigger, it becomes laggy too.