I haven’t noticed this mentioned before, but why are we showing the symbol for the Mac “Option” key in place of “Alt” in the footer? I realize that this key is used as “alt” on Mac keyboards, but this particular symbol is never seen by any Windows user ever.

Nice catch. This needs to go.

However, this seems pretty clear as a symbol for “alternative”. Better than writing “ALT”. Linux user btw.

seems pretty clear as a symbol for “alternative”

LOL, but you can’t just make them up or swap them as you like. The symbol shown in the above image is specifically for the Mac “Option” key. That key can act as an “alt” key for non-mac things. However, there is a specific symbol for “Alt Key”, shown below: 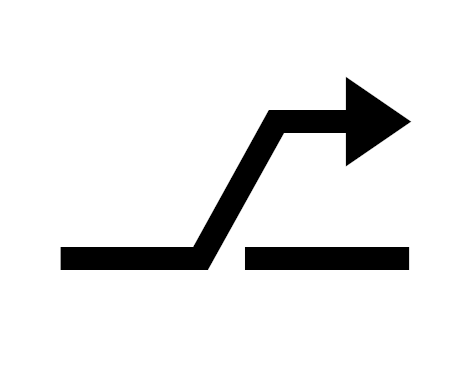 To be clear, I’m not saying we should use ⌥ for mac “Option” versus ⎇ for PC “Alt”. Nor ✲ for mac Ctrl and ⎈ for PC control, or use ⌘ for Command or ❖ for Win. Or even ⎋ for escape.

Although these symbols exist for these things, they are not normally printed on the vast majority of keyboards so most users are not familiar with them.

Indeed, I for one have never even seen the ‘alt’ or ‘ctrl’ symbols.

LOL, but you can’t just make them up or swap them as you like

Who’s making what up or swapping what? Sorry, I don’t get that part. Regardless, the other symbol is nice as well. Both better than actually writing “ALT”. Symbols are much nicer and make it more readable when you have a description next to it. (IMHO) - Also, they need less space.

Both better than actually writing “ALT”

However, for the vast majority of keyboards neither is shown. So it doesn’t matter if symbols are generally better, or use less space, etc. If people don’t recognize the symbols for what they symbolize, they won’t work for this purpose.

Most people just would not recognize what following keys are being represented:

Thanks for clarifying! And yes that makes sense. I just tried if I can even find the symbols in Blender. Turns out I can’t. Knife Tool for example shows only text.

ok… I found some. Esc is also shown as text. Not that bad actually.

The symbols take up far less space than if we had to write ‘Shift’. Often times, such as with Transform, we don’t have a lot of space for all the keys.

For consistency, we should use the same symbols in the menus too - saves a lot of space there as well. 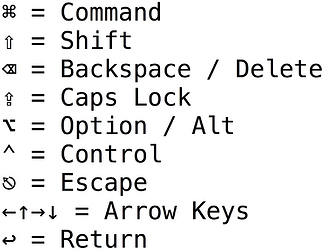 Well, that these symbols take up less space than text is slightly obvious and doesn’t really need stating. LOL.

The more important point is whether these particular symbols serve the intended purpose. And for that it is important that you don’t let your own personal experience color the decision. When you (personally) look down at your own Mac keyboard you probably see almost all of these symbols on the keys.

However, when I look down at my own keyboard (Logitech G710+) I see none of them, besides “Return” and the directional arrows. This is typical for almost all non-mac keyboards.

So a large majority of Blender users have never seen the mac-specific ⌘ symbol and would never guess in a million years that it might indicate to press the “Windows” key.

Similarly, no non-mac user would ever see ⌥ because it is not a symbol for alt, but is a symbol for the Mac “Option” key. On your keyboard it is labelled with “Option” and has alternate text of “alt” in small letters because that key can behave as alt for non-mac programs. But the standard symbol for alt is ⎇. But, as mentioned neither symbol is ever shown on any non-mac keyboard.

Using caret ^ for control is problematic because most people, seeing this alone, would assume it to be shift. There hasn’t really been much association between caret and control except in control script documentation from the 70s-90s. Following is an image of a Mac keyboard using the helm symbol (U+2388) ⎈ for control. Note that some PC keyboards have also used helm, while some others have used “open center asterisk” (U+2732) ✲. But again, most PC keyboards show no symbol at all.

How are users supposed to use the symbols shown on the footer to indicate what keys to press? Are you expecting them to know how the mac symbols relate to a non-mac keyboard? Are we also going to add a legend that says “⌥ = Alt” somewhere?

Logically, if we are going to stick PC users with symbols they have never seen that seem to have no correlation to the keys on their keyboard, we should at least use more standard symbols.

But for Control we really really should use the ISO/IEC 9995 symbol for it which is the helm ⎈ (U+2388) for all platforms. Not only is it the standard for all keyboards but has also been used on some mac keyboards and some PC keyboards, although few. 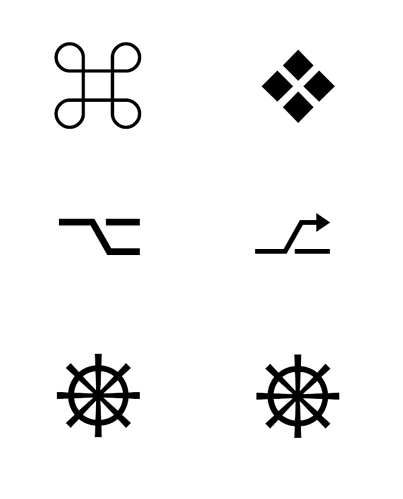 Sure, we could detect the platform and use different symbols. On the Mac, we should not use that ‘rudder’ symbol for Ctrl though - it uses the symbol I posted earlier.

Once that is done, we can use these symbols inside the menus too, so they are used consistently throughout the UI.

we could detect the platform and use different symbols

Yes, since the alternative is to use symbols that are only shown on the keyboards of… 12% (?) of your users, and are nonsensical to everyone else. LOL.

On the Mac, we should not use that ‘rudder’ symbol for Ctrl though

LOL. As mentioned earlier, that symbol is called “helm” and it is the current universal symbol for what to draw on the keytop of the control key of a keyboard. And has been used on Mac keyboards as well, as shown in the image I posted earlier.

But yes, you can just use the symbols on your own particular keyboard on your OS. I am merely offering more standard alternatives that might work better for a larger portion of your users.

Personally, I would use the text Alt, Ctrl, Shift, etc and worry less about the space. I’d much rather those be clear and understandable, rather than small and indecipherable…

The Mac really doesn’t use that icon for Ctrl.

If we implement a system that changes the icons based on the platform, we might as well use the correct icon for Ctrl.

Yes, I know exactly what is on your keyboard.

This reminds me of a similar discussion I had some years ago about the character Blender uses when cutting off text that does not fit in available space.

When we cut off text and want to indicate that some text is missing we are adding a character called “two-dot leader” - “‥”, which can be used to designate the bounds of intervals, like “[0…1]”, or to help fill wide rows like in a table of contents. What should be used is a “horizontal ellipsis” - “…” - which is intended for that purpose.

But when I brought up that we were using the wrong character I was told that didn’t matter because what we were using was similar but smaller. Which is a funny argument. Like arguing that a colon can be swapped for semi-colon because they look so similar, without realizing that people who do know the difference just think you are dumb. LOL.

Similarly I am really worried that Blender will get symbols that indicate keypresses that only make sense to a very small number of users, mostly because those are shown on your own keyboard.

All Blender users currently see “Ctrl Z” beside “Undo” in the menu. If that is changed to “^Z” then many users will think that is really “shift Z”. And most users will be even more confused if it says “⎈Z”. It should just remain “Ctrl Z” and don’t worry about the space. And the footer should be consistent and just show “Ctrl Z” there too.

In case I have not been clear, I really prefer TEXT to indicate keypresses and keystate, rather than symbols. This thread just started because you are using a symbol for alt that is non-standard and unknown outside of mac keyboards.

As for the symbols, what I said was that we could use the appropriate symbols for each platform. If, on Windows, the symbol for Ctrl, Shift, Alt etc are different, we can simply use those symbols in that case.

So using a smaller indicator in this case has that advantage

Its not a smaller indicator, it is the wrong indicator.

That was what was funny about the story: that symbols matter. So you don’t just use the wrong symbol because it looks almost okay but is shorter, or prettier, or for any other reason. A two-dot leader is not an ellipsis. For people who don’t know the difference then it seems like a trivial little non-issue, but for anyone who knows the difference it makes Blender look stupid. In exactly the same way if Blender used the wrong terminology for anything else. Symbols just stand in for words, phrases, or ideas. So using the wrong symbol is no different from using Mute for Moot, Mould for Mold, etc.

As for the symbols, what I said was that we could use the appropriate symbols for each platform. If, on Windows, the symbol for Ctrl, Shift, Alt etc are different, we can simply use those symbols in that case.

I don’t think I can state this any simpler. Yes, you have some symbols that you can use for the 12% (or whatever it is) for Mac users. What you don’t have are symbols that you can use for the 88% of users who are not using macs. And just because there aren’t usable symbols for the larger group doesn’t mean you can use the symbols of the smaller group. You need to use TEXT for the PCs because we don’t have a reliable way of differentiating between shift, ctrl, and alt without using text.

This is getting confusing. You keep replying as if I said that 1, we shoud never make any changes to this area and 2, that we should not try and be good citizens on the platforms we support. I never did say those things.

We could simply use the appropriate symbols on each platform, and also use these consistently throughout the UI.

Similarly, it would also be nice to eventually add support for the native Mac menu bar, and make better use of the ⌘-key too.

On Windows, there are probably also other things that could be done to integrate Blender better, such as a unified window header.

There was a time, years ago, when we didn’t support dragging and dropping images and files from outside Blender, and where we didn’t even integrate with the system clipboard on our various supported platforms. We should continue to do better in this respect.

This is getting confusing

It really should not be. Oh well, I tried.