I want to pay attention on VR/XR development in Blender, which is (in my opinion) slow and confused.
Please compare statistics of VR “explosion” with some other technology, which is progressing “slowly but surely”.
I mean, it is not easy to find a recent technology which has made so much progress as VR in terms of hardware, software, user base, etc.
If I compare these statistics with Blender VR development, I would say that Blender is on the wrong track. 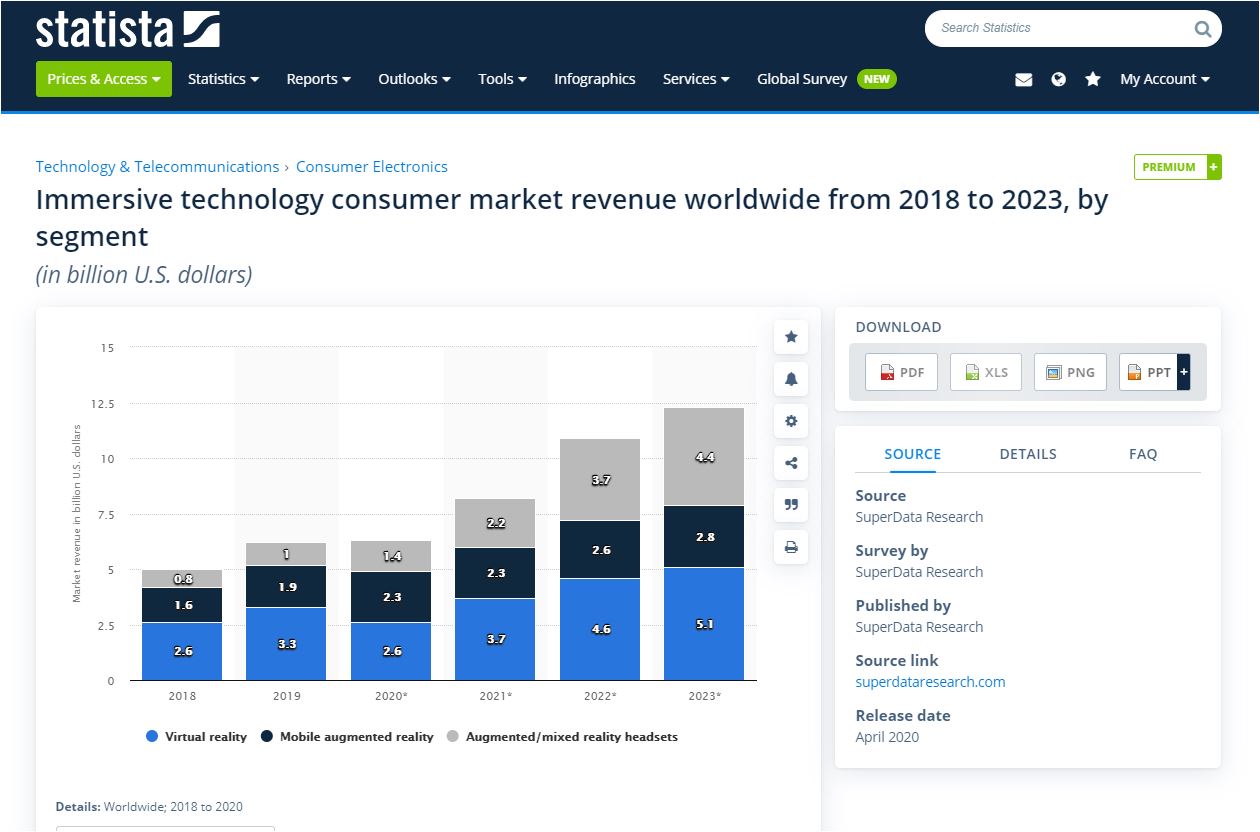 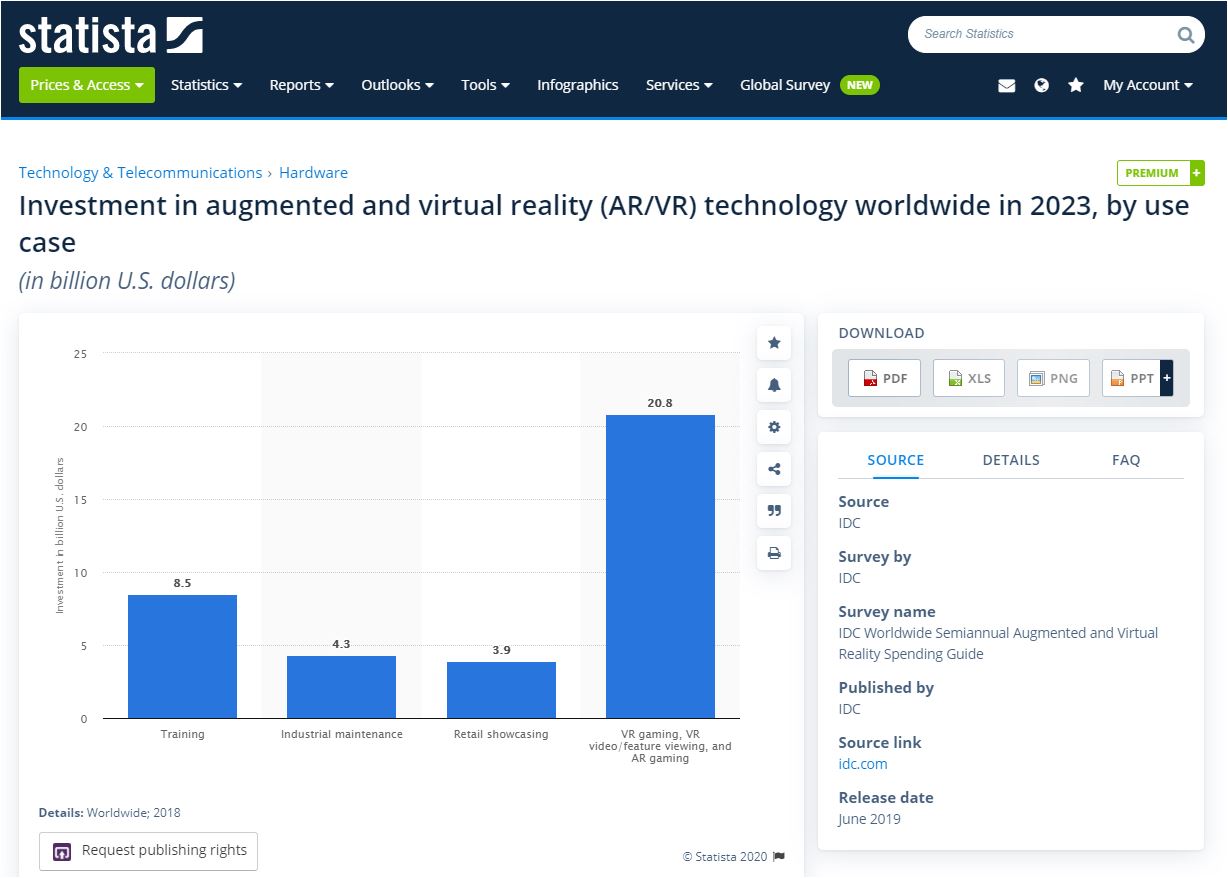 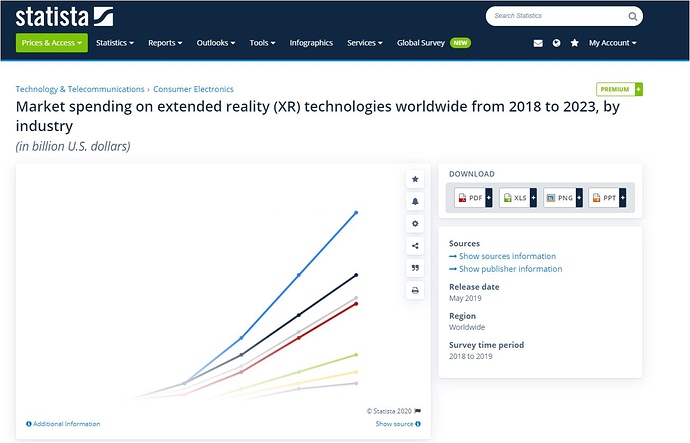 Blender was many years exotic and underestimated in 3D community due to weird UI and opposition to all standards (sorry right click school).
Now, when it finally gained attraction of many artists and studios, there is a threat that it will start stagnating with VR/XR age.
Documents like VR/XR: Big Picture Kickoff and current state of VR development give no clear ETA or plan for development.
This could be the reason for artists to stop using Blender and use production ready VR/XR products.
Please ask any modeler / sculptor / animator how they feel after they use a quality VR product.
It’s immersive experience and NOBODY would ever go back to mouse and screen.

There is a marui-plugin.com, small team who made excellent Maya VR plugin, so they have a quality product and huge VR knowledge.
They also started BLENDER XR project, which is opensource like Blender.
Instead of incorporating their knowledge into Blender they got only threats about copyright infringement and absolutely no help from Blender foundation.
Currently they have no funds to proceed with BlenderXR project.

With 106+ thousand euros of Blender funds, 47 corporate supporters and 5000+ individual supporters it is really a shame,
that Blender has no VR (ok, it has scene inspection, which is close to nothing) and in the same time quality VR project is stagnating due to underpayment .

If I’m totally wrong and you are investing huge energy and funds to VR/XR development, just ignore my letter or tell me so.

I wholeheartedly agree. There is a huge potential here that is left to stagnate.

The BlenderXR plugin from marui is great, I use it regularly. I really hope that they can develop it further.
It is such a shame that it is not integrated directly into Blender.

But your argumentation at the end counts for almost every feature. Maybe you can ask the developers of the plugin if you are able to contribute directly to Blender or find more people for that. There are currently only a few people working on that (mostly GSoC projects and one is cancelled). The developers are aware that VR/XR is a big thing bit there are also so many other areas that need attention.

With 106+ thousand euros of Blender funds, 47 corporate supporters and 5000+ individual supporters it is really a shame,
that Blender has no VR (ok, it has scene inspection, which is close to nothing) and in the same time quality VR project is stagnating due to underpayment .

The developers are aware that VR/XR is a big thing bit there are also so many other areas that need attention.

Thanks @Pipeliner ! It’s exactly what I’m talking about… It’s about spending countless hours on polishing UI which you will have to throw away tomorrow, because VR/XR age requires a new UX paradigm. It’s about understanding market changes. Hopefully people at Blender foundation see that.

VR is a big thing. It is a joy to be immersed in your creation.
But that does not mean that all kind of 3D artists will spend 8/10/12 hours a day working with a VR headset on their head.

It does not matter how people use VR to play games, watch videos or chat.
That is not the perfect ergonomic solution to create 3D stuff.

That is a plus. But that is not essential in 3D creation.
Since centuries, humans are building things based on 2D sketches.
The invention of computer and handling of perspective by them did not change the fact that you start your creation by a design on a plane.

VR will never address the need to, sometimes, pass to an orthographic 2D View plane.
It is great to be able to draw in 3D space.
It is a nightmare to try check symmetry of a model or a rig in a perspective view.

Yes, that is an incomparable way to apprehend space in your creation at different steps of creation process. That does not mean that you will spend the whole creation process using it.

With 2.8x and 2.9x series, Blender is currently reinventing itself to reach high standards of feature length movie industry.
It is a CG animation software. It is used to produce movies, game assets and animations, illustrations, 3D prints…
It is an open source software that can be derived to produce a thousands of different things.
VR will never become its main and unique purpose.
So, whatever Blender Foundation power is, only a small fraction of it will always be dedicated to VR.

Eventually, a hundred of thousands of euros : that is sufficient to pay with decent salaries, each month, only 2 dozens of developers to handle 13 modules.
And knowledge has to be shared between several developers for safety of maintainability of software, if one of them has to go elsewhere.
So, currently, it is not possible with only 20 developers to dedicate some of them entirely to one unique task.
https://wiki.blender.org/wiki/Modules

So, current situation is that most of areas of Blender don’t have a developer working on it, all day, continuously, year after year.

To have some people working all day on VR stuff, budget of Blender Foundation should be around millions of euros, not hundreds of thousands.

To have some people working all day on VR stuff, budget of Blender Foundation should be around millions of euros, not hundreds of thousands.

Thanks for reply, @RonanDucluzeau! I totally agree with you, if you mean to rewrite the whole behemoth for VR. I don’t think it’s even possible, let alone wise… For such a huge codebases VR plugin is the best solution imho. That’s why I mentioned marui-plugin.com. It’s basically one man who is developing Blender XR, Max Krichenbauer. He’d love to spend more time on BlenderXR or contribute to Blender development, if he could make it financially possible (he needs to pay bills). I also agree with you that blender developers can not do miracles (although it sometimes seems to me that they do

There is also amazing work of Project MPX. Can you imagine what happens when grease pencil meets VR? I think only nuclear explosion can describe that moment

So what I’m saying … these guys need to sit together and with some financial/logistical/programming support from Blender foundation quality blender VR could be done.

I agree on some things, since I have been a Blender user for a long time and also use VR, although for that I have to use other software. The potential of VR in 3D and how it is growing, is undoubted. However, the Mauri plugin, in my opinion, does not reflect at all the way of working so direct that Blender has, although I have used it on occasions, it is too slow, you end up working in the traditional way because of the speed that a keyboard gives you or a graphics tablet.
I also understand the financing problem and priorities of Blender, but I think that some time should be urgently worked on creating the libraries and a base code so that people can develop their own interface and work in AR / VR with Blender , implementing the tools current and developing new ones in AR / VR. I think that if this code implementation is done, the community will do the rest and surely new projects and ideas will come out, in the form of Addons or Builds made by the community, companies and studios, so that finally Blender can work on implementing it in its code internal.

I also want to note that many people were waiting to see the OpenXR implementation and code for VR, and therefore some projects were suspended. It seems that this OpenXR implementation is insufficient at the moment due to the lack of libraries for the detection and operation of the control devices. I think making one last effort to finish this would make it easier for people to work on implementing AR / VR in Blender.

Thanks, @AbrahamCastilla. Yes, I agree with you, both Blender XR from Marui and MPX are in a proof-of-concept state, far from the production-ready plugin. On the other hand, Blender XR has libraries for HTC Vive/ WindowsMR/ Fove/ Oculus Rift, which covers almost the entire market today. Maybe it was just a silly idea, but I thought that with some goodwill from Blender Foundation VR for Blender could be months instead of years away.

Anyway, I’m totally ok with using other tools for VR, after all, they’re all just tools

Blender is still immensely useful for other stuff… and it will probably stay my favorite 3D tool.

I understand that BlenderMPX was suspended awaiting results from PeterK’s OpenXR implementation. But it is true that PeterK has not yet finished the development of the last milestone where it implements the controls. I support you that the Blender Foundation should finish this development as soon as possible, so that others can move forward. With this development finished, even Mauri could implement his plugin using OpenXR, and BlenderMPX would advance, even other free libraries could be used for AR / VR development in Blender.
Everything and that I appreciate PeterK’s work, I think I should finish it or add developers until I have all the OpenXR implemented and functional, so that people can develop.

Thanks, @AbrahamCastilla! Well, everything is said, so it depends on BF. Have a nice day!

I just found VR among “Big Blender Projects For 2021” with this note under the image: “Blender’s VR capabilities will be massively upgraded in 2021.” Amazing!!! Go Blender!

I read this when it was posted on the blog and also got excited- but I’m curious where the development is happening since it doesn’t appear to be covered by any of the development modules (the most recent roadmap update has VR development ending in late 2020) and there doesn’t seem to be any discussion happening here on devtalk about it. Is this being handled by one of the commercial contributors like NVidia, Ubisoft, or Epic?

I work entirely in VR right now, and as they have said that does not mean that I am all day with the helmets on (nor do I want to nor will I want to because it is bad for my health). But it is true that currently Blender is quite inoperative in VR. It can’t even be used to visualize in VR correctly because the color depth fails, there is no way to calculate the light correctly in VR… That would at least help to save me the step of constantly going to the engine to be able to display the content in VR

Virtual Reality module is here, progress is still happening, we are in Milestone 1.5: Controller Interaction.

awesome, thanks for the link!

which software are you currently working with when you work entirely in VR? Quill?

I mean that actually all my work is for VR, not that I work only with VR software

I use quill, medium, gravity sketch, masterpiece studio, also tilt brush. I’m so sorry Blender doesn’t catch up with VR, on desktop it was my favorite 3d app. There is no more Virtual Reality section in Release Notes from 2.91 up, so… let’s be realistic, just forget it. Maya has excellent plugins for VR (Marui4, VR-Plugin 6.0, Autodesk Create VR), so it is still possible to work. I will miss the Blender