Here are the main points:

There’s also a working prototype Blender addon that uses the gpu module
Let me know what do you think, what could be improved to this?, and how it would be integrated to replace the old texturing system? 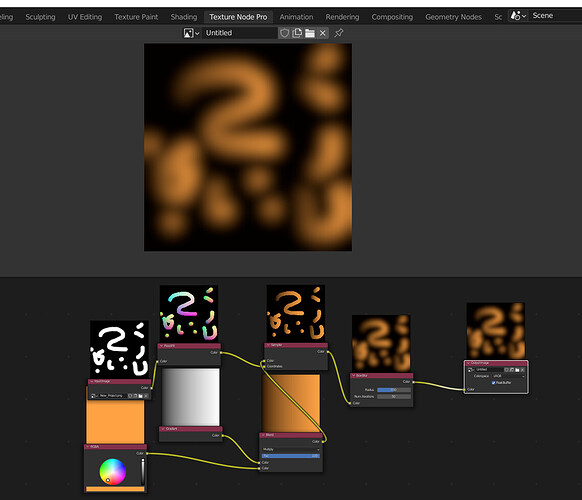 I suggest to read through this task and topic:
https://developer.blender.org/T54656

Hello I am Jishan Singh I am preparing proposal for redesigning Texture node editor as it has been depreciated for quite a while here’s Design i think we combine shader and texture editor, every color result can be rendered in texture like Texture Output node can be used in material tab and node tree will be copied [Screenshot from 2021-03-22 14-20-47] texture output can be used in material tab but there will be different tab for texture here [Screenshot from 2021-03-22 14-06-12] Edit: T…

With the assumption of a 2D image and GPU support this can not serve as a replacement for the old texture nodes. We should build on the existing function/geometry nodes CPU implementation, and then as a second step consider how to make that more powerful or faster for the subset of use cases where 2D image operations and GPU support are possible.

ok I see now, many thanks for feedback

Have you implemented this in C or as an addon?

Please implement his function natively in blender is a must have for a lot of people since a long time some peoples want this !

Agree, it is going to be eventually, but not this system, this is more suitable as an addon than natively, or maybe natively but not to replace the texturing system, it is a different thing now I understand more

Some rewrite and ideas is needed for implement perfectly !

But there should definitely be crossover talks between updating the texturing system and the compositor improvements as they technically should operate in the same domain; rasterized images.

There’s a real opportunity here for improving BOTH.

Is true but, but both system need to be separated … you must work only one for one system ! and not two for one, because the system is different… And the system is probably written in Vulkan Shader, for increase performance ! Because blender must be soon moved to vulkan than OPEN GL in the past.