You are used to do things the hard way/with very few options. I’m not a fan of keyboard centric workflows only, everything needs to be balanced. Hotkeys are meant to give quick access to commands, NOT to be the only way to access them. If it’s the only way then it’s bad design.
Blender is the only 3d app with selection tools without gizmo, this is worrying.

Was “Set 3D Cursor” hardcoded to SHIFT + RMB? I can’t get rid of it even when changing the keymap. I want it to do it pressing ALT + CTRL + RMB drag.

With the new transform gizmo you can easily move/scale along two axis but with keyboard shortcuts you have to press G and then shift+ the right axis or G, shift+mmb and you have to click the right spot on the screen to find the right axis plane which is imo much more complicated than just dragging the gizmo.

What i find kind of waste is that the box select is a separated tool? why would anyone use the select tool as you have to then switch back and forth between the tools? everyone would eventually just use B shortcut as its much faster. I hope we will be able to configure the box select to the left click like we could in 2.7x? Not sure if this is still possible but haven’t managed to do this anymore?

This works only in Global orientation, which I find very limiting.
There is a way you can get the functionality of the MMB, X, Y, Z keys (and double tapping them) with just one hotkey.
I made a proposal and I wrote a script. You can test it.

For those who like it, it can potentially free up three keys and a mouse button for something else.
And for those who don’t, it doesn’t change anything.

maya and unity for example, where you have to choose between Q, W, E and select the axis to move its kinda worse than blender.

This is how in Maya you don’t actually need to select the axis to move.
You have the functionality of G, LMB (to confirm), MMB, X,Y,Z (and double tap each of them) in just MMB (grab) and a hotkey.
6 / 9 inputs vs 2 .

extra inputs or clean viewport, where did I see this before…

This works only in Global orientation, which I find very limiting.
There is a way you can get the functionality of the MMB, X, Y, Z keys (and double tapping them) with just one hotkey.

No!, it works despite the current orientation, I think you dont know enough about manipulators yet.

Now we need to add a SHIFT key to the other 9 inputs.

To me it’s just over complicated compared to:

The concept from my previous post is not dependent on the gizmo. It can be made to work in grab mode.
This way - “cleaner viewport”, faster snapping to axis, much less input, we all win

Happy day of the 3D by the way!(today is 3rd of December also known as the 3D artist day or 3D printing day)

OK I think we got pretty sidetracked from the main topic here.

what if you want to move in free space?
I mean like in most of the time.

the problem there is one operator missing which is “Active” key.
if you use maya you know the ( x,c,v) for snapping, if you press and holding the “x” it will active the moment you release it will deactivate. this operator in blender is missing. only limit for (shift,ctrl,alt and “S” for color picker in texture paint).
I already talk about this :
Keyboard "Release" not working the correct way
hope they can add this operator its important for many cases.

Actually it is supported for many operators, the change to grab is an example of that.

I think you misunderstand me what I mean .
there is (click,press,release etc…) operates but one missing is the active .
which mean if you press and holding the key it will active the moment you release it will deactivate.

here example if you press and holding the “D” it will active the edit pivot, the moment you release the key it will Deactivate. this operator as I mention in the topic is missing.

Would it be possible to just make it so two (or more) tools active at the same time…?

Like for example: I would really like the select and transform tool to be available at the same time.
Then I would go and left-click select “Select Box” and e.g. shift+left-click select “Move” in the left side tool bar and I would be ready to go.

Similar to the “Vertex/Edge/Face” select in Edit Mode where you can activate all 3 components at the same time in 2.79.

This would open up the possibility of any combination anyone’s heart may desire.

Strike infinite birds with one stone! So to say

Blender is the only 3d app with selection tools without gizmo, this is worrying.

The 3ds Max selection tool doesn’t have a gizmo, unless you’re calling the object axes a gizmo. I feel like the statement should be reversed to “Blender is the only 3d app with gizmos without selection tools” since you can’t box select without a shortcut when the move tool is active; or most tools really.

I proposed this, but noone seems to see the benefit of this workflow:

my sad proposal with -2 votes -or- Any Click Any Tool

Sorry I didn’t read your proposal. But at least we are on the same page

Haha, I forgot there are still some 3d apps out there with archaic selection workflows.

This work very well for me, but if we have some toggle option in tool settings to switch between on/off click and drag… 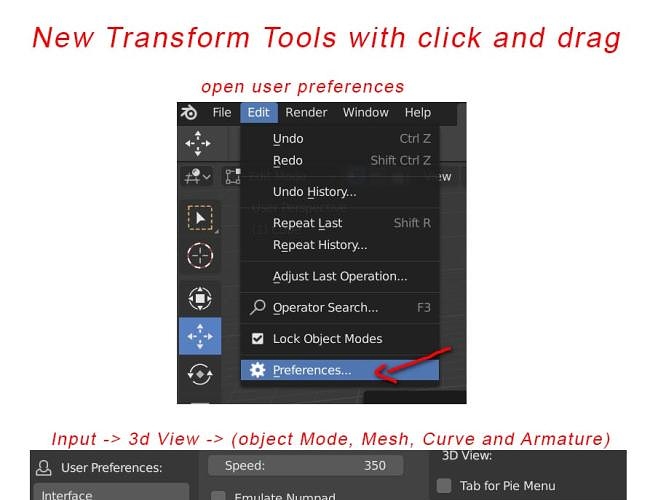 The way this works in 2.79 is that tolerant selection is used when there are absolutely no entire edges in the selection.

But if there is at least 1 entire edge in the selection it turns into not tolerant selection and only what’s inside gets selected.

I have to say I used this behaviour many many many times knowingly and having it under a checkbox would slow this down. Especially because having the tolerant selection work when Blender knows nothing would be selected is better than selecting nothing -> because you can always deselect if you didn’t intend that.

Rhino has an interesting approach to this: