If you make tutorials I would suggest two things:

Thats the point, some people got hardwired to use this kind of knowledge, its just like forcing tutorial users to be robots who can just replace a .config file and use fluently a new keymap in tutorials.

There are no hard and fast rules for tutorials. If you want to use and teach Blender using right click selection, you can if you want.

The number of left and right click select users is split about 50/50. As far as I know addons and tutorials are already doing OK with that situation, it’s not a new problem.

I don’t have problem with the default, the problem is that the default change behaviours that are better in right click than in left click. So, we have two defaults with big differences in the behaviour.

Why is mandatory that when you change to left click you lost the right click to use active tool and put a context menu here? I understand the option, but not the limitation, same with pie menus. It forces me to use the old belnder2.79 keymap, when I only want the new system with only a personal hotkeys.

There’s a common sense that you should teach the official option instead of the alternative ones.
Please I need you devs to promise.
Please promise that you will make a extensive and easy to read official documentation of the keymaps so the newbies like me and you were can just read and learn the keymaps of their choice.

that will change soon as 2.80 hit the shelves, u can bet on that

When 2.8 is fully released, there will be full documentation.

I dont mean full documentation.
I mean, a full keymap specific documentation besides the documentation
Blender currently doesnt have an easy list of all the operators organized by type showing all the keys and how they work for each keymap mode.

This is the only keymap docs I could find and is far from complete:
https://docs.blender.org/manual/en/latest/interface/common_shortcuts.html

Just as an example I had to learn the keymap by messing arround with the keyboard, no tutorial were complete enough.
It would be a time and rescource saver to put all the shortcuts in a complete documentation.

Let me sum it up this way: Today, Blender Developer channel has uploaded a video about Left Click now being the default. In just a few hours since the upload, the video has already received more likes than the days and weeks old videos, even some of the months old videos. And the proportion of the likes to dislikes is following:

No! I am disapointed and even though I didn’t dislike the video, verry few people will dislike the video just because they are diappointed, this kind of hating doesnt fit with the mind of the blender comunity

@LudvikKoutny If I would go with your kind of thinking, I can make the following argument: 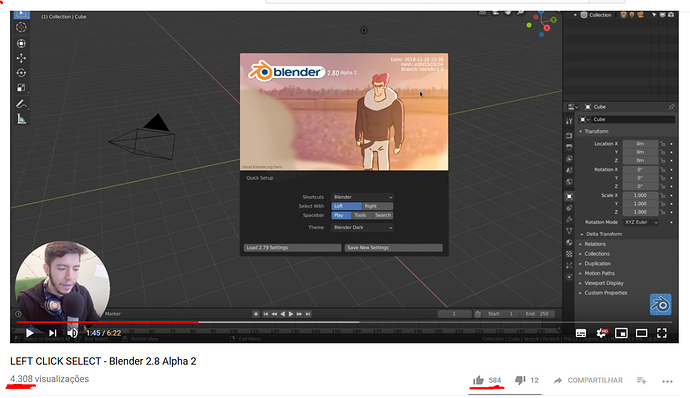 But this argument is also false because verry few people also dont like videos when they like it!

Not all people like or unlike videos. If people unlike the normally use the unlike.

I wish this was true but there is missing some modal keymaps like for loopcut, inset and bevel.

The number of left and right click select users is split about 50/50. As far as I know addons and tutorials are already doing OK with that situation, it’s not a new problem.

This.
On all softwares, people have been using different keymaps, UIs, even languages, … Yet we seem to be surviving it. At the end of the day, you always find at least one tutorial for your taste when you need to start. And usually, when you made a change in your keymap, you don’t forget it when you watch a tutorial. And mostly, after a few days or weeks, you don’t even pay attention to such things anymore, you’ve passed over the point of basic controls learning.

I’m shocked to see how suddenly RCS users are freaking out and pointing issues that LCS advocates have been fighting for 23 years. Especially now as those issues are solved (or on their way to be).

I’ll quote myself here, but just to remind some people here:

Up to 2.7 there was no way to a new user to either understand at a glance what’s going on nor how to do the very simple thing of selecting (it’s just the n°1 basic thing you learned to do with LC from your first second on a computer until Blender).
(…)
A simple thing as selecting shouldn’t require anything, it’s not rocket science. Either the basic feature behaves as in other softwares do, either the software provides the information clearly from the first second, as well as a way to switch to a more conventional behavior. AND the conventional behavior should actually work and not penalize the user for choosing it.

This has been the kind fights of LCS advocates for 23 years. Not mentioning the strong opposition from RCS advocates which had the edge until now and was often hostile towards LCS advocates or even to the simple idea to let the user know about RCS from startup and there is optionally LCS. But fortunately, such unilateral debates will become old stories very soon.

Changes are being made to make Blender more open, not only on the source code license but also on the usability, user-friendliness. Of course, changes are changes, people already there will need to change some of their habits. But understand that in the long run, it will be beneficial for everyone.

Don’t bother about tutorials, this is not an issue. I bet you watched a lot of LCS blender tutos without even noticing it.

And honestly, now that it’s done and that everyone can finally be aware and choose for themselves, let’s get back to the real stakes of 2.8: EEVEE, cycles improvements, UDIMs, opensubdiv, etc… It’s way more interesting, isn’t it ?

I hope, I really hope you are right.