Definitely not. If one checkbox was already considered too much clutter, this would be complete hell. More choice is almost always a bad thing. The best possible scenario is one default behavior which is so good people don’t feel any need to switch.

But I simply don’t agree that a single checkbox is too much clutter, rawalanche. The choices that can be made here will be mostly constant while modeling, based on personal judgement. You can reorder list I proposed to have more stable choices listed separately and keep important options further up, but these are just a few options that can easily be tweaked if needed for special purposes while modeling. It’s not good to move things like that to userprefs.

Personally I don’t like the whole scene turn xray normally, that is often clutter, but there may be cases where it makes sense, with overlapping objects for example. So there is no such thing as a perfect default for all cases.

There are lot’s of option dropdowns like viewport overlays, with lots of options, so why do we start arguing of clutter in the case of a handful of checkboxes, nested under a single on off toggle but not with these complex dropdowns. I know you heard that statement once, but perhaps the problem was exactly there that a single checkbox introduced a whole popup.

Edit: Ok, the different colorings for hidden lines and face dots could be moved to the userprefs, but I can still hardly see the reason as long as this dropdown doesn’t include more functionality, putting in at the bottom of the list under a Display header might be as good.

One checkbox isn’t, but 6 are

I believe I do not fully understand the situation as much as you do Rawalanche, and wish to know further…Indeed, what I suggested previously about just getting rid of Face-dot selection and by ourselves working always in XRay mode and toggling opacity levels with python commands is not feasable, since I just discovered the diference in objects displays depending on the object mode, even if the XRay value is the same:

As it can be seen in the image, both modes are using the same XRay value, yet while in Edge mode, the display is still transparent, unlike in Object mode. This would make it impossible to always work with XRay mode on at full opacity, since even if we’re using a value of 1, we can still see through things when editing verts/edges/faces.

Is this behaviour what you are referring to with “transparency of wireframe mode is directly tied to Xray mode.”?

One checkbox isn’t, but 6 are

Nice touch that you don’t even try come up with some valid arguments here. So I do it the same and say we can merge the two coloring checkboxes into one and we just have 5 left, what isn’t too much clutter.

As it can be seen in the image, both modes are using the same XRay value, yet while in Edge mode, the display is still transparent, unlike in Object mode.

Is this behaviour what you are referring to with “ transparency of wireframe mode is directly tied to Xray mode. ”?

No I think what he wants to tell you is the Xray slider value and toggle is used for multiple things at the same time. Hidden Line transparency in Wireframe mode and Face Transparency in Solid Render Mode are controlled by the slider and the faces overdraw is also affected by the xray toggle.

@xrg Oh my God yes. Finally. I have been postponing modeling projects in Blender for this reason alone.

I don’t use that site too often. As I understand it…

1-This is a patch made by a non-official Blender dev, and now the Devs will review whether this gets incorporated into later Blender releases or not. Correct?
2-In the meantime, we can download this for ourselves. To do this, we hit “Download Raw Diff”, and replace ALL the contents of the indicated index path file (release/scripts/startup/bl_ui/space_toolsystem_toolbar.py).
3-AFAIK, this is a totally working solution with 2.81.

No, you need to apply this to the master branch and compile blender.

So far my little patch hasnt received much attention, but let’s see.

I don’t use that site too often. As I understand it…

1-This is a patch made by a non-official Blender dev, and now the Devs will review whether this gets incorporated into later Blender releases or not. Correct?
2-In the meantime, we can download this for ourselves. To do this, we hit “Download Raw Diff”, and replace ALL the contents of the indicated index path file (release/scripts/startup/bl_ui/space_toolsystem_toolbar.py).
3-AFAIK, this is a totally working solution with 2.81.

No, if you know made builds you need to go to your blender folder, where you made the “make update” or “make full” and do

then a “make full” or release or lite, like you preffer.

But now that blender have change all the overlay system I don’t know if this patch will need changes.

yessss custom build is done and the select through feature is working! So happy!

I was having problems compiling due to devs having deleted/renamed the edit_mesh_mode.c file in the most recent master commit, which I needed to modify with your patch’s contents. Thankfully doing this with an older commit, around the date you posted this, did the trick.

As for the patch itself, I would probably also include the new checkbox in the Move, Rotate & Scale tools, and not just in the Tweak tool, so that the user doesn’t have to go there to toggle the behaviour when he is using any of the other 3 tools or others (or decide another, individual place in which it affects all tools, like in a Preferences category, Viewport Overlays or Rawalanche’s suggestion).

Anyway, I am so happy this is now working. Thank you so much Benjamin, you’re the best!

Well that is a general usability problem with the toolsystem vs directly calling the operators. In this case calling boxselect modal while using the move as the active tool. From my perspective it doesnt make much sense to add selection related options to the transform tools - as they only do single element selections themselves as far as I know…

Anyway you can also setup a shortcut to toggle this property:
bpy.context.scene.tool_settings.mesh_select_through

I’ve also created an account to add another voice to this issue. I’ve been using 3D modelling packages professionally for 10 years and I thought 2.8 was finally the time to switch to Blender. I knew there would be some differences I’d have to adjust to but this is one of those situations where I could not believe that there was no way to have unlimited selection. I was even more surprised to find that it used to be an option. Please restore this functionality.

Hi there ! 10 years of using max, and now about 3 months into blender, this is one of the most annoying issues so far. Please fix that, it can’t be that hard

I would be so happy if this would be fixed.

Any news on this? The amount of users complaining about this is exceptional, and the patch is sitting ignored for two months now: https://developer.blender.org/D6322

Well they just closed the patch. Fantastic. I found this topic earlier today and was going to make an account to comment in support of the need to split backface selection from x-ray mode but now this happened… this is so frustrating. The excuse given being that it could lead to “accidents.” Well tens of thousands of industry professionals in games and in Hollywood VFX use this type of face selection on a daily basis and you don’t hear them complaining that it’s problematic. Trust the user. They know their own geometry. They’re the ones who created it.

Standard selection behavior in other DCC apps is being shunned for an insane workaround. Setting x-ray opacity to 1.0 is not a real solution. It’s not even an acceptable crutch. This is a serious workflow impediment.

Limit Selection to Visible should either be a tool setting or a user preference.

(Also as a side note, Rawalanche, Maya has face dot selection. It hasn’t been the default face selection mode for a few years now but it’s still there in the settings to be enabled at any time. I’d actually like the ability to do face dots in Blender in any face selection mode, not just x-ray, but that’s just me.)

Contain a face center and this issue will go away.
Do you mean there is no way to turn off face centers in Wireframe/Xray? Then that could be an issue.

Here’s the William’s comment under the new design task:

The main issue, is that this option conflicts with Blender’s current paradigm, which is ‘you select what you can see’.
With the linked patch, this conflict is there. If you disable Select Through, and then enable X-Ray, it does select through. Same with Wireframe view and other examples.
I don’t see a great solution to this without removing Blender’s core selection paradigm, or offering some sort of preference, or making the option feel broken, since if often won’t work as expected.

And here’s me, trying to explain William (for about the 3rd time) that the issue he is making it to be is not really an issue: 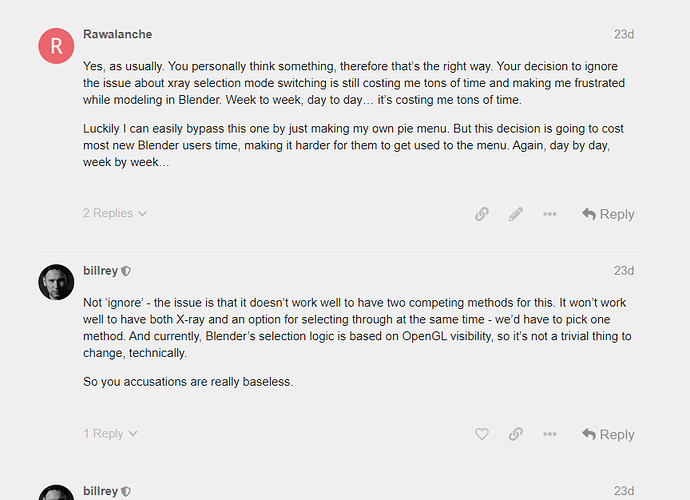 William is currently the biggest obstacle preventing this from ever happening. If someone else has the nerve to try to explain this to him, please try. I’ve tried several times and always failed. I am making this public because he did not even bother to respond to the conversation he himself started.

I’ve spent several hours trying to explain to him that the design would work in a such way that it would be impossible to get to a state where select through would conflict in Xray, and few days after he’s back at it saying the main issue is “select through conflicting with Xray”.

I would not say so at all. Vast majority of 2.8+ improvements have been great. But there are some core areas where blender is still painfully lacking, this being one of them. And this is so important because it costs many artists a lot of time on daily basis.