Strangely, on a dual Xeon Platinum system it’s about 12% at max with four GPUs and doesn’t go up much from there even with 7 GPUs. Obviously the dual Xeon is a lot faster than the quad core, but in benchmarks the two Xeons are only about 4 times as fast as the single i5. On the i5, it’s using more than twice the CPU power of the Xeons.

Is this an issue with Cycles or potentially something with consumer chipsets/processors?

Sounds like your scene is too big to fit into VRAM, so it’s going out of core which means the cpu is busy sending bits of information to the gpu on demand. Try turning on simplify and limiting the render time texture size to something small and see if you get 100% gpu usage with little cpu usage. Make sure you have lock interface enabled in the render menu at the top too, that frees up gpu resources by making the viewport inactive during rendering.

@3di During this testing I used the Classroom demo file. Looking at GPU-z sensors or nvidia-smi, the scene uses about 1.2GB of VRAM when rendering. All of the cards were 3GB or 6GB. I’ll double check with some of the tips you mentioned to see if that makes a difference.

Hi, Cycles does not idle CPU during render on GPU.
There was a patch included in Blender but it was reverted, was not working on some older GPU, iirc. I cant find it at moment.
I ask @brecht some days ago and it is on his todo list but not high priority.
No idea why it work better with Xeon CPU.

Thanks mib2berlin. The high CPU load doesn’t seem right to me, so I’m suspecting an issue with Blender. When I have a chance I’ll give Redshift a try and see how it handles things, but that might not be that informative. Maybe I’ll try on another consumer platform like Ryzen to see if there’s an issue there as well.

I’m fortunate to mostly have powerful and current hardware, but the Blender community is meant for everyone - that’s one of the most amazing things about it. That means a lot of users on older hardware, though admittedly many won’t have multi-GPU. So, it’s probably an edge case that’s not a high priority, but I’m sure it affects some people.

Thanks for checking that. I opened a bug against Blender for this (T77248). This probably doesn’t affect a lot of people, but hopefully it’s an easy fix for those of us who cobble together older parts to speed up our work.

Update: There is a bug in Blender that causes this issue. They are calling it a “known limitation,” even though I can’t find any documentation of such a limitation. They plan to fix it at an unknown date. It appears to be have been open for 6 years now, so I would guess it would never get fixed at this point, which is very disappointing. Maybe if I donate more to the Blender Foundation?

Thank you for the knowledge about VRAM!

I encountered CPU usage 100% but GPU was below 10% while rendering 360 stereo top-bottom with Cycles
However my settings are set as CUDA and check GPU only.

So as a newbie in blender my assumtion for these situation are
1.Cycles will automatically switch to CPU render when the scene is too big to fit in VRAM and this is decided before start rendering?

2.Cycles will use system memory when it runs out of VRAM.
but this will only happen when it was decided to use gpu render in the firstplace?

sorry for my bad english

I encountered this 3 or so days ago crashed my computer 4 maybe 5 times completely because of it. 100 percent CPU and maybe 25 percent GPU. Very interesting this bug has been around for 6 years. I think having GPU only render being stated as a thing should be changed to maybe GPU render, or maybe have some warnings somewhere.

I am known as a miracle bug-finder but seriously bugs that crash my computer well freeze it for eternity are not ones I like being surprised by so to you guys are there any weird other bugs I need to watch for?

My bad if I am interrupting something I shouldn’t be.

Hi, as I wrote some posts above Cycles GPU use ~ one CPU core for each GPU.
I have two GPU now and it works as expected, tested with Blender 2.91.
Can you please add your OS and Blender version.
Blender 2.92 provide GPU+CPU for Optix cards, too.
Iirc your GTX 1660Ti can use Optix features and may you have to disable CPU there.
Blender should not crash anyway, if you can reproduce it it is may time to file a bug report.

2.91.
Windows 10.
I can reproduce it but filing a bug report would be almost impossible since my computer completely freezes. I cannot get Optix to work it always gives me the illegal address message. Usually stops rendering immediately as well.

The only way I can file a bug report is to hand over the file and provide a video showing what to do and see if you can cause it to freeze your computer. It was hair that caused it for me. I had it low as well no children etc. I tried everything to get it to render but it said as long as you have hair on that model we crashing.
the bear in this image was the issue. I baked hair from another software (at a much higher account on all of the model unlike in blender. Which was whatever was facing the cam) into poly’s and it rendered. 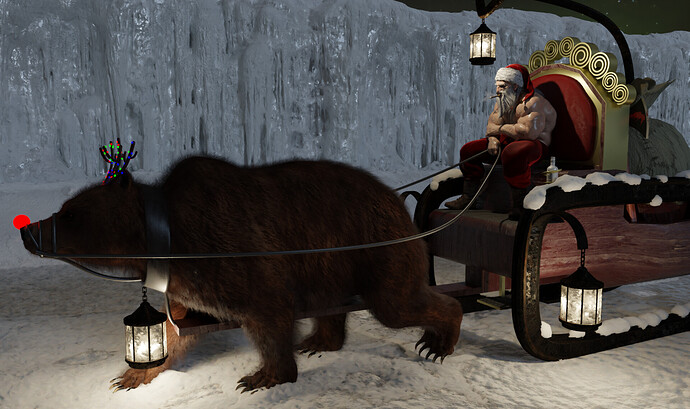 I just ran into the same issue now in a scene I’m working on.
GPU barely gets above 10% while CPU was at 100% throughout. and then the scene takes 0.8GB of Vram.
Using an AMD Ryzen 5 3550H processor and GTX1050 with 3gig vram.
Has anyone found a fix or workaround yet?

Have you seen, that you need to switch to “Cuda” in the Task Manager to see the proper load percentage for the GPU?

Ah thanks. The GPU is maxed out when I switched to CUDA. So everything is working fine I guess? But why does the CPU still gets to 100% though if I’m using GPU to render

Are you sure that the CPU is deactivated under Preferences->System? Do you see more than one tile rendering at the same time?

In preference > system i set it to GPU cuda but below that my gtx card is checked as well as my amd processor.am I supposed to uncheck the processor? I dunno this is my first time using a gpu
Also 8 tiles are rendering at once and not 1 large tile.

Yeah. If both the GPU and the CPU are activated in the preferences, they will both be used for rendering. Just uncheck the CPU if you want to use only the GPU for rendering. You should just see one tile at a time then.

Thanks. It works fine now