I generally did not like the new 2.8 interface much. hate the change in shortcuts (Tab key, numeric keys). I wish the developers would spent their time in making blender more feature rich. adding animation tools, improving video editor. What I see is everyday they are moving things here and there. That is not development. most of this things where is Blender. They just moved it around. Best part of blender was very less drop down menus. now they are more. Where there were buttons now there are nonsense drop down menus. (Smooth Shading, Remove Doubles, etc…) Whole software industry is going away from menus. only blender is going towards it.

Blender 2.8 hasn’t been released yet, not even as a beta. When it is released, there will be explanations of what has changed.

I wish the developers would spent their time in making blender more feature rich. adding animation tools, improving video editor. What I see is everyday they are moving things here and there. That is not development.

To be clear, developers aren’t actually spending much time doing that. It’s just what you see immediately, but most of the work is under the hood like dependency graph and overrides to improve the animation system, and new features like Eevee, viewport, collections, asset manager, etc.

please avoid moving every action to mouseclicks and do not forget about the notebook users. for me the chane of the keymap and especially the change in how to reach editmode looks like a big step back, maybe it will be possible to toggle the keymap between ‚2.79-mode‘ and ‚experimental-2.8-mode‘?

Is/Will it be possible to display a tool tip with the shortcut when hovering over a tool button, menu, etc. That will significantly ease the learning curve.

About the workspace tabs situation -
Right now you can’t close a tab unless your in it.
I think it would be nice if we could close a tab without clicking it first. Maybe the X button should appear when hovering over a tab? Or maybe always be there?

Is/Will it be possible to display a tool tip with the shortcut when hovering over a tool button, menu, etc. That will significantly ease the learning curve.

That’s on the to do list for the tool system:
https://developer.blender.org/T55036

About the workspace tabs situation -
Right now you can’t close a tab unless your in it.
I think it would be nice if we could close a tab without clicking it first. Maybe the X button should appear when hovering over a tab? Or maybe always be there?

That plan is to remove the X button from the tabs and move them to a right click menu. These are not meant to be opened and closed often like tabs in a browser. You’d typically add/remove workspaces when setting up your startup UI and user preferences, not while you’re working.

Hi guys, you might have already seen this, but there are some really amazing organization and streamlining ideas here: https://www.youtube.com/watch?v=FAdiGHwfDkQ&feature=youtu.be

It’s really a great solution for people that use wide monitors. The columns, I understand that are only an aproximation, because with one column youy need same space to see the names 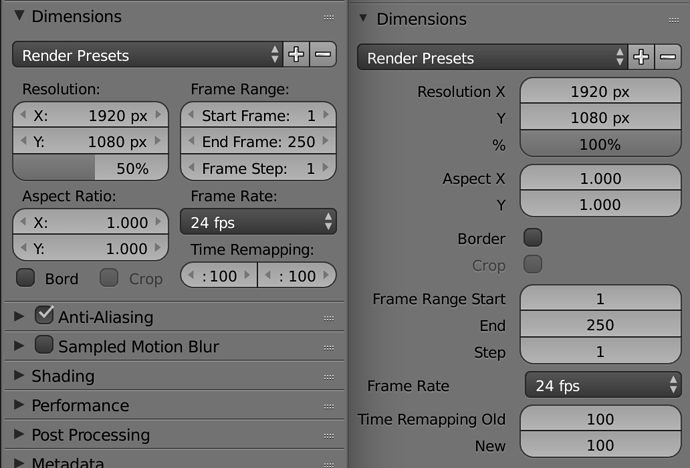 Hi everyone!
First of all wow, it’s amazing how fast you developer are working on this, just last week’s builds feel already very old; I’ve been following the project on developer.blender.org for some time but, not being a developer myself, I didn’t want to clutter the tasks. So, thank you for opening this forum and for being so open to suggestions and critics, that’s something you don’t see very often.

, I like the consistency of the new single column layout, but I think there are a couple of problems at the moment:

Found out I can’t post more than 1 image, so I’ve collapsed everything together. 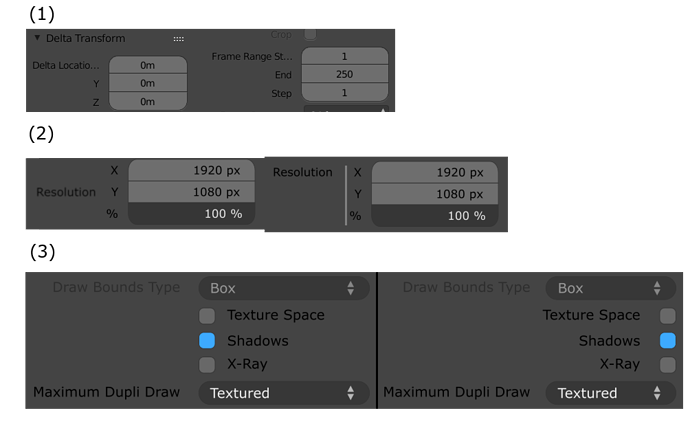 I will be honest, I think we should be utilizing the top bar even more. I feel like having a bunch of different drop down menus from a top bar is… alright but I think if we really opened it up and maybe started putting some more settings in there or possibly tools, that might help.

What I would really like to see also is more animatable properties and parameters, and it would be great if you would be able to Identify them easier in the UI, instead of having to right click on them to discover if you can keyframe them or not, I am an ex Softimage user slowly switching to Blender and looking forward to making it my main DCC app when 2.8 is released.

Look, hate on my all you want and I realize this isn’t 100% UI related, but I think we should be using left click as the default for select. Then we can easily implement a right click menu and open up the door for a whole new way for users to work. We can easily make the cursor placement something else. Additionally, I think the cursor icon in the toolbar should just be a standard mouse arrow and not the 3D cursor.

this is basically a repost of what i said before about the hotkeys on the developer stuff. since this is the proper place for it. i’ve tried to condense it and word it more clearly and to the point. not sure i accomplished that. it’s just reasoning as to why i think using tab for active tool switching is a better choice than spacebar.

because of that advanced users are likely to pick a single tool to use as the active one constantly or fairly constantly as the active one depending on the task they’re working on in order to speed up that specific task (type of modeling, retopo, ect). the tab key was already used when changing between those types of instances so i think it makes more sense to have active tool swap be on tab for the hotkey because active tool swap would tend to happen when changing between those types of instances.

tab also seems to be on the left side of the keyboard in pretty much every language keyboard so reaching for tab also has a bit of a visual connection to how the tool shelf is on the left side. this combined with the connection to when we already used tab vs when we’re likely to swap the active tool can make using tab for the active tool swap hotkey a little easier to learn.

active tool swapping may be used constantly by new users but wil they use the hotkey for it? new users don’t know all the hotkeys so even if they did activate the hotkey for it they’d have to look for the tool in the list to activate it’s hotkey. this can present a negative use because the toolshelf is always in the same place on the screen. the popup hotkey menu isn’t in a standard spot so it would be a more enjoyable experience and feel faster for new users to move towards the general area on the tool shelf they know what they want is at while they find it more specifically with their eyes. granted neither case is that fast for the total beginners but having the tools in a consistent place for choosing and swapping is still a boon for them rather than using the hotkey popup.

so for the listed reasons i don’t believe the active tool swap hotkey benefits more from being the slightly more comfortable space bar than it does from being the tab key.

what little benefit being slightly more comfortable the spacebar is for it also doesn’t seem to be worth the discomfort of moving the search function off of space and destroying old user’s muscle memory for it.

i think the intermediate step of having spacebar being the new active tool swap hotkey while the tab key was still edit mode may have skewed the dev’s impression of what a terrible jump it is to displace search feature with a new feature when they cleared up tab by moving edit mode. it essentially rearranged 3 things when they only had to rearrange two.
that intermediate step isn’t something most users are going to have. without that intermediate step you’ve kind of jumbled everything up more than it needed to be and at least for me tab felt so much more natural for the new feature (explained in above wall of text) than spacebar did.

i didn’t mind editmode changing to 2 near as much as i thought i would but tab and spacebar just weren’t working for me. it was just a hard NoPe!
i swapped tab to active tool swap and spacebar back to search and i was just like mind blown this works so much better and is much easier to adjust to.

so for the love of pete, please change active tool swap to tab and leave search on spacebar.

I have been watching Pablo’s daily updates on Youtube, and quite frankly, I am blown away! I am LOVING every one of the UI changes you have made; not only are they making Blender easier to use, but they are also bringing the whole UI into the 21st century.

And the wireframe changes that were announced today - WOW! That alone is a HUGE improvement.

There will always be those old-timers who don’t like change, but please don’t let their complaints hold you back. These changes have been so badly needed for so long, and I am glad to see them!

Keep up the AWESOME work!

Here is a proposal for unified 2d/3d alignation tool widget, but it requires for proper CAD snap system update
https://developer.blender.org/T45734#506696

Here is the actual implementation of automatically aligned layout, done on 2.79 without any changes to Blender’s source.

I think it is good to have a thin single column layout for thin areas, but people with wide monitors can afford less scrolling by taking up space form their viewport.

Another proposal I have is finally making a always-on-top UI widgets. Some addons (including mine) implement UI heavy custom editors in those invoke_props_dialog windows which fade away the moment you click on the other region. Please make it stay until it is explcitly closed.

I’ve already written my proposal for the menus here

But I don’t know where it could be read. So I’ll just show you screenshots of what I’m proposing to keep the colony system while keeping the readability fast. Without having to focus on the interface.

Here is a proposal I created : 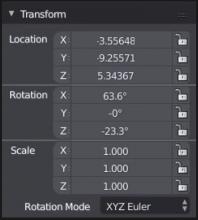 I honestly think that keeping the variable name in its box really makes blender easier to read and faster. Adding a thin bar at the bottom of each part also makes the interface more understandable.