Hi devs, I’m an old blenderhead but it’s my first post on devtalk.

I work at a small design studio and we’re actually using another render engine as our production renderer. But since the CyclesX project came out we’re evaluating to switch back to Cycles. So I was tasked with the job of porting one of our scenes from the other renderer to Cycles to make some comparisons.

I have to say that the new Cycles is really impressive for quality and also speed!

But during the tests I noticed some strange behaviour when I was using tangent normalmaps. I investigated a bit more and confirmed that also bump maps (heightmaps) were behaving badly. I cannot post the original files but I made a simple scene to illustrate the problem. Sorry for my english, hope to be understandable. 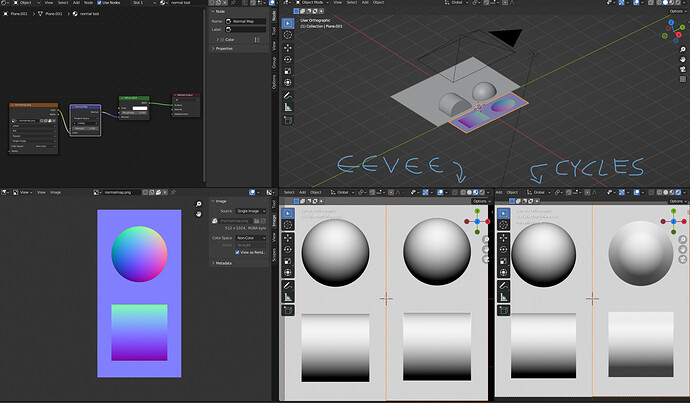 I rendered a normalmap from the sphere cylinder and plane you can see in the viewport. Then I applied the normalmap to the plane on the right, using a simple diffuse shader for all the objects. I set the light paths to direct light, added a shadeless sun lamp and an orthogonal camera. You can see the result in the two viewports at the bottom: eevee renders correctly but cycles doesn’t. It looks as the sphere sides is straightend and it makes it look somewhat like a cone with a curved top.

It’s strange that this went unnoticed for so long but, unless I did something worng, it seems really a bug.
I will do a proper bug report tomorrow, in the meantime if you wat to check I’ve uploaded the blend file here: Upload files for free - map test.blend - ufile.io

here is the screenshot of the 2.79b version with the same normalmap 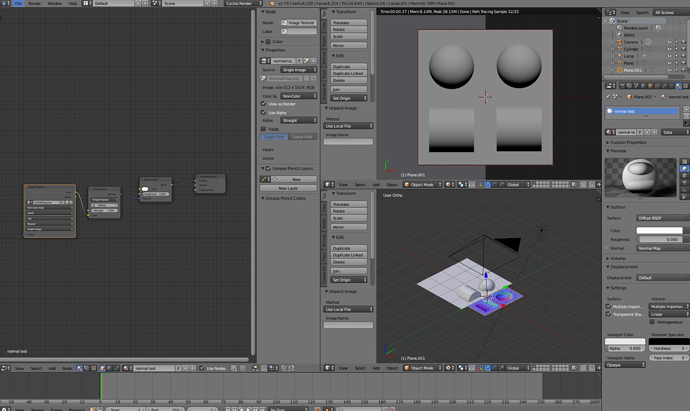