The main goal of this meeting will be a status update on & discussion of ongoing work.

The meeting will be open for everybody interested to join on Google Meet (link below).

Since the Last Meeting / Announcements

Parenting and the Hidden Matrix

Discussion on DevTalk: Sybren asked for concrete proposal, but not there yet.

Conclusion of the discussion:

The next meeting will be on Thursday 9 December, 18:00 CET/Amsterdam time. Again it will be open for everybody who’s interested. The provisionary meeting agenda will be linked in the #animation-module channel before the meeting.

@sybren Is there any chance of having this topic added to the meeting agenda?

Hi I’m trying to understand blender parenting transformations. If I parent two cubes using Ctrl+P (Object), the child cube transform isn’t changed to reflect the current parent, and still references the “world” coordinate system. If I reset its transform to (0,0,0), instead of centering in its new parent, it centers in the world. I don’t see any delta transform here that makes this transform possible. I know that I can use the “Parent Object without inverse”, That way I have a correct transfo…

I’ve added it as an optional item, to be discussed if we still have time.

thanks a lot for adding this!

Hi!! I’m so excited that this is in the discussion, I’ve already answered on the relative thread, and I’m very sorry that we couldn’t provide a valid proposal. I’m not sure what this particular point mean, but I suspect (and really hope) that this single parenting option could solve the whole issue.

It’s a little more complicated than that, since children can be animated : how does the transformation caused by applying the inverse matrix propagate throughout the animation fcurves ? the whole point of not applying the parent inverse matrix is to not mess up animation, which is defendable, but I think we could do even better.

Yeah, I suspected that, but I still have to wrap my head around the animation issue…
edit:
@Hadriscus check your message inbox!

It’s not nice to publicly announce that you’re taking this discussion private. Either do it really private, and don’t tell anyone else, or just keep the discussion in public.

I believe we’ve identified most of the shortcomings in the current parenting behaviour but coming up with a user facing design needs some more thinking, and that’s not mentioning the implementation, which I don’t have the skills to do

edit that is, provided we find the time. We can always do it in small steps

Yeah, sorry for that. That was my first PM on this forum and I just wanted to be sure that he read the message, but @Hadriscus just explained what it was about actually, nothing secret, just content not allowed in public discussions.

hello. do you have any plans to introduce animation layers into the blender? I could help a little bit with that. I wrote the concept of these layers. it describes how they should work and how the animator should work with them. yes, maybe not everything is perfect, I am not a ux designer and not an animator with 7 years of experience, but this concept definitely has the right to live, at least with edits from knowledgeable people
I think that if you still want to implement it, it will not be very difficult, because the layers are neatly integrated into the already existing animation process, almost without changing it. in addition, I was able to identify several optimization tricks (they will be recorded in the document). I hope you will not ignore me, and at least take a peek at the document
anim layers.txt (4.0 KB)
also, in addition to the document, I have a sketch of the interface of the new editor, in which work with layers will be carried out. if you do not refuse this offer, then I will publish it. Alas, that’s all I can do to help. my programming skills are still too weak to implement this really well, and
I don’t have much free time

Hi @sanek, thanks for your interest in animation layers. To answer your question, yes there are ideas about improving the animation layering system beyond what the NLA currently offers. However, I feel that the current animation system needs a redesign of the code, before any new big features are added to it. There is already quite a bit of technical debt in there, which should be resolved first.

If you want to help developing in the animation & rigging code, take a look at the tasks on the workboard. Fixing some bugs could be a great way of getting your feet wet.

@sybren, why don’t you concentrate on fixing the technical debt and redesigning the animation system? I’ve been looking at your rigging roadmap. I will not reinvent the wheel, and I will repeat the meaning of the reaction to this map of one rigger who works in a blender: if there are no animators who will use a blender, then there will be no sense from professional rigging tools. and they don’t go because the animation tools are bad. and at the same time, this is not only a response from professionals (at least in the Russian blender community, I quite often saw people express themselves vividly, covering everything with a three-story mat, due to the fact that it is difficult for them to animate in a blender due to the lack of many features), I saw a beginner who, having started studying animation, preferred Maya crack to blender. And no, I’m not trying to expose the blender as a bad program, I’m tending to the fact that we really need to make a breakthrough, and deal with the problems you have voiced, and finally start improving the animation toolset. I don’t understand why you didn’t put it in the first place. you understand everything perfectly, quite possibly even better than me

Blender is over 20 years old. Ton is the only one who’s been around for all that time, and he’s no longer writing code for Blender. This means that every developer currently working on Blender does so by continuing someone else’s work, and I’m no exception.

why don’t you concentrate on fixing the technical debt and redesigning the animation system?

Because I had an Asset Browser to work on, and make it possible for it to include a Pose Library. Or because I wrote a USD exporter. There are plenty of things to do, and not that many people to actually do it.

@Hadriscus, @RiccardoBancone, Has the proposal of parent inverse matrix issue been done yet?
I was thinking to make one myself. My idea would be just to expose the matrix in UI for artis at this point.
In first clans, it looks simple enough thing for myself to get into blender development.

No I haven’t been able to work on a mockup yet, it’s too busy on my end right now. Just exposing the matrix would be a nice first step. Do you mean as editable or readonly values? Ultimately I thought exposing a set of transform values would be ideal, they are more human-readable-and-editable than a matrix.

Nope, sorry. Under a very demanding project ATM. But it would be nice to see your proposal!

Yes, the idea would be basically to show the inverse matrix in UI similar way the Delta Transform is shown. 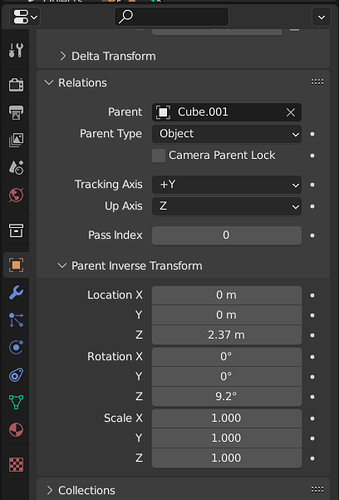 So my idea would be for me to take reference from delta transform code and implement Parent inverse to UI similar way. (I heard UI stuff is good place start with blender development)

@Felor The problem with this approach is that it’s not guaranteed that the parent inverse matrix can actually be decomposed into loc/rot/scale. When it has sheer, it won’t be possible to do this.

I suppose it could be represented by a 5*5 matrix ? or it could use the “fix shear” method @angavrilov added for bones ? so that the matrix returns to orthogonality. By the way, why aren’t the inherit scale methods available for objects as well ?