In Brief:
Generate a range of strings that can be distributed on points. 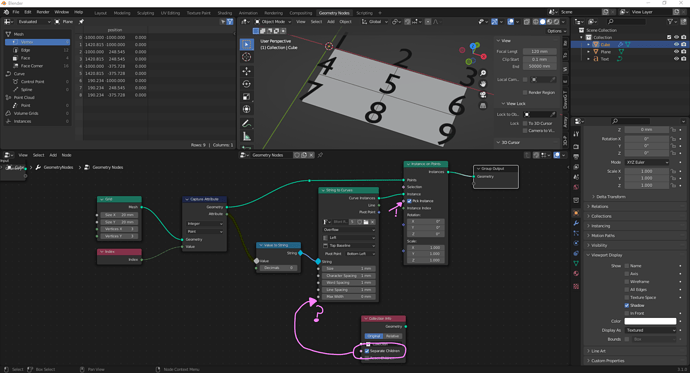 Create a mesh grid, and capture the vertex indices, then create a curve for each index value on the corresponding vertex of the grid.

Why is this not possible now?
There are multiple roadblocks to achieving this directly now. Firstly, the “Value to String” and “String to Curve” nodes cannot accept fields as inputs. Secondly, the output of the “String to Curve” node would need to have an analogy of the “Separate Children” option found in the “Collection Info” node.

Is there a work around in the current version of Blender?
Yes, there is. In my professional production pipeline I have created a two step solution. Initially a Python script creates a set of text objects in their own collection. Following that a Geometry Nodes tree takes input geometry, and places the text objects from the afore mentioned collection and instances them on the points of geometry.

Why would this proposal be superior to the existing work around?
Simply, by making use of the vertex index numbers, rather than a static collection of objects, it would be possible to dynamically renumber and rearrange a numeric grid. It should be noted that this may well be achievable if the recent “Loops in Geometry Nodes” proposal were to be implemented.

Thanks for the post, but as is mentioned in the header of this forum, it isn’t meant for feature requests. So I’ll have to close this thread.

I’ll note though that it’s not really string fields that are needed here, but geometry fields, because the result of the string to curves node would be different for every point. While that’s theoretically possible, it also opens the doors to a LOT of complexity, and we made the decision not to do that a while ago, so we could always have the simplicity of “geometry data is passed with real data-flow”. Loops will likely be the way to address this use case, or a separate “Text Distribute” node that uses a string field input. There’s more discussion about this stuff here: Text mograph nodes design