Ok so I have been using blender’s compositor for quite some time and have realized a couple of things. Here’s my proposal for some of the improvements for the overall way blender’s VSE and compositor are used. I think these would not only benefit me or a couple of users but really make blender one of the best free video editors out there.

Firstly, blender’s compositor is an absolute beast… It’s incredibly powerful and has all the important and basic (if not more) tools and features (with the exception of AI powered tools) to produce high end videos and effects. It integrates 3D so well into it. A major reason why blender’s compositor is not your ideal compositor is because of how painfully slow it is. Just simple effects like blur and distortion take a considerable amount of time to process. Add that to editing videos and previewing them and you got the perfect recipe for disaster. I don’t see as to why blender’s compositor is so darn slow, sure it’s a 3D software but it’s pretty good at 2d. I really think that blender should have a real time compositor, It would make life so darn easy to be able to not switch between softwares etc.

Secondly, blender’s video sequence editor (VSE) is also pretty good for basic level editing. With the new updates it now handle footage really well. However it can’t do intermediate level stuff like transitions, distortions, keying or math funtions. I think there is a GREAT solution to all of these (though probably not easy at all)

So what am I trying to say?
Simply one word… Resolve. That’s right, da vinci has a Great way to edit things which I think can also be implemented in blender.

In resolve, you have your basic timeline, you can do your editing and grading there etc. if you want to do more detailed stuff, you right click on it and click “open in fusion” which simply takes you resolves node based compositing page where you can do all sorts of fancy stuff! 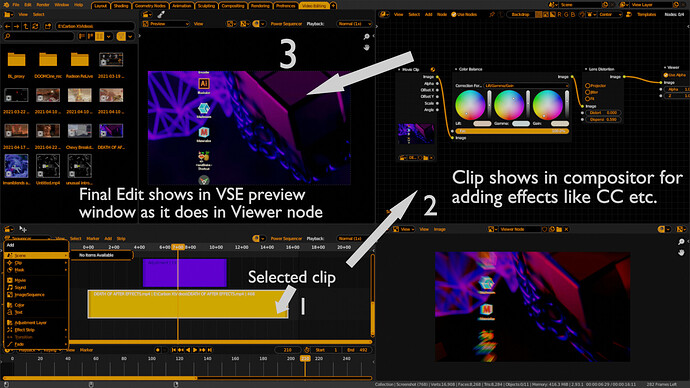 I hope this clears things up.

So in conclusion:
If blender’s already super capable compositor was made to update real time and seamlessly integrate it with the VSE (kind of like in resolve), blender’s video editing and compositing capabilities will be taken on a whole new level and people will actually start using it as their primary video editor. We would, in this way, have the freedom to key, distort, use math functions,composite videos and images, stabilize and properly color grade our videos and images (along with many other things) right into blender, eliminating the need to switch between softwares!!

This definitely doesn’t belong in the gsoc area, beyond that it kinda depends, from your post it is not entirely clear if you are looking to work on this your self , of it’s just an idea you are sharing?

Every time i want to do some compositing after editing i ask myself this question, why is the vse not linked to the compositor, so we can, as you mentioned, double click on a strip so we can do compositing for that 1 strip, do comp, then get back to vse to visual the results with all the edit, would love to see that workflow integrated in blender.

Btw there’s a dev working on the performance of the compositor.

There may be, but gsoc has less than 4 weeks left, you can’t just drop an project this size on that poor student.

Yeah I’m actually new on this site and this is my first post. so apologies

What if the compositor was invoked by a strip modifier? It could create a nodegroup that could be used again, and again much like geometry nodes.

Perhaps it could be.