It would be awesome to have a performance mode option for Armature modifiers, similar to “Fast Navigate” in sculpting.

Currently, if there are a bunch of modifiers active after the Armature modifier
(e.g. Subdivision Surface, Particle Systems (Hair), Displacement, Smooth Corrective… )
performance will likely be relatively poor. To animate/pose animators have to go in and deactivate all calculation heavy modifiers after the Armature to be able to move controllers without stuttering.

With my proposition, the armature modifier would automatically deactivate all following modifiers while any Pose tool is in modal mode (e.g. while translating, rotating, using breakdown, etc.) and refreshed them, when the new pose is confirmed. Alternatively this could be set for every modifier individually.
Just like “Fast Navigate” in Sculpt Mode, all the fancy stuff will only be calculated when needed.

This would allow animators to ALWAYS move around controllers smoothly while being able to still immediately see a precise result once they confirmed the pose. I imagine a dramatic workflow speed up.

This could even be extended to automatically deactivate certain modifiers on playback and reactivate them as soon as we pause and land on a frame!

Why this should not just be a Pose Mode option:
There may be some objects attached to an armature that need performance, but others that have a crucial dependency on following modifiers… therefore this should be on per-object level for maximum control.
A good example for this would be a lattice modifier on cartoony eyes. With a global setting we‘d see the eyes „pop out“ every time we work on a pose, so I’d definitely want to disable this for certain objects.

Of course we first need to disclose whether this is performance- and implementation-wise feasible; I still went ahead and drafted some mock-ups of my idea

I edited a quick side-by-side comparison to clarify what I mean by “modal” posing.

Variation 1: As Part of Armature Modifier

Here’s a quick mock-up of what it could look like on the modifier.
I added an option for “allowed” subdivisions after the Modifier, kind of like Simplify.

(Sorry for broken links, because of my “new user” status I cannot include more here.)

Activated with up to two subdivisions allowed
https:__i.imgur.com_y3Kz5rn.png
Deactivated
https:__imgur.com_7DPU9qC.png

Instead of being tied to the Armature modifier, this could be a visibility state for every modifier separately… that way we could define precisely what we see while posing. 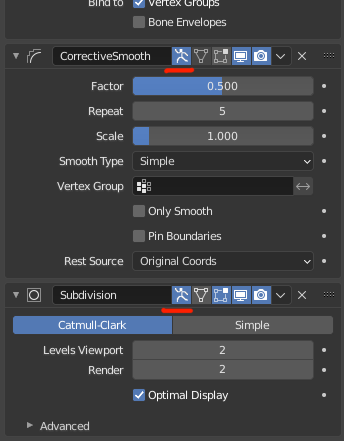