Work will be committed to the soc-2020-soft-body branch in the extern/softbody and intern/softbody directories if you want to check it out.

This thread is for weekly reports. Please post comments to the discussions and suggestions thread.

Blender does not have any support for tetrahedral meshes. In order to verify the solver/API are working, I generate an extremely simple “lattice” around the input surface mesh. This is nothing more than embedding the surface vertices in a few tets that fill the entire space. This helped me verify I was indeed updating the vertices in the solver correctly, mapping them back to the surface vertices, and passing that information to Blender to view the results in the viewport. However this rudimentary lattice does not produce any interesting dynamics, and it is not stored in the cache. Of course this is only temporary, and expanding/improving the input is the focus of next week.

I’ve added a new page to keep track of longer-term next steps: link to roadmap. There is a growing and never-ending list of to-do’s, so I’ll keep them in one place.

Quick note: if you have questions regarding details of this project or solver, please feel free to post it in the discussion or message me directly. All questions from all experience levels are okay! I don’t go deep in the weeds with these updates or the proposal, so I’d be happy to clear up any confusion.

), so I added one similar to the horse in the original paper. Some notes on the attached video:

To get the dillo-drop-demo up and running:

WOW! I just can’t believe what I’m seeing here… Thanks by the efforts to bring this so useful feature @mattoverby
Is it possible to test the current implementation?
I would like to contribute making videos examples to demonstrate the usage or even for documentation if you need…

Would it make sense to look at SDF based collision detection now that Blender has OpenVDB support ? Thats one way Houdini solves collisions is volume based sampling. Might be worth looking…

Is it possible to test the current implementation?
I would like to contribute making videos examples to demonstrate the usage or even for documentation if you need…

Yes, I commit all of my code to the soc-2020-soft-body branch. However, the interface is a bit clunky right now as I am focused on building the solver. If you would like to try it anyway, all collision obstacles must be joined into the same object (right click → join) before begin made a collision object. Baking/cache and all that should work normally. If you do happen to make any neat demos I would be happy to see them

Would it make sense to look at SDF based collision detection.

It absolutely would. In fact my first pass at collision detection was using SDFGen. That worked okay and I had plans to revisit that. I have never used OpenVDB but that seems like a good option.

Two updates: lattice generation and constraint formulation/linear solver. There is a lot of text below, but it is mostly background information for those wanting to learn more about the project. As always, feel free to message me with questions/suggestions.

Lattice generation:
Recap: A high resolution surface is “embedded” in a low-resolution deforming lattice. Dynamics are computed on the lattice and the embedded surface is updated accordingly. This sacrifices some fidelity in dynamics, but significantly improves run time and usability.

I reimplemented the lattice generation to allow better control on resolution and get smaller tets/more vertices on the surface than the interior, which gives us better-looking dynamics. It’s built in a top-down manner by subdividing boxes into 8 smaller boxes until a specified resolution. A box is only split if it contains the embedded surface. While it does what I wanted, it’s unfortunately a bit slow (e.g. it takes a second or two to generate the Armadillo from last week’s update). So, I still don’t like it, and will continue to make changes in the future. Attached is an image of the embedded surface rendered outside of Blender.

Constraint formulation and linear solver:
Recap for those who have not read the TVCG paper or are not familiar with projective dynamics or ADMM-PD: the solver works through alternating mimizations of the sum of elastic energies (local step) and momentum potential (global step). The former is parallelizable and the latter is a linear solve, in which the factorization can be precomputed assuming no change in topology. This provides some benefits over classic descent-type solvers in terms of robustness, rapid early-iteration convergence, and being linesearch-free. In the TVCG paper we found that resolving certain constraints (collisions, pins, attachment/slide) during the global step is much more effective than the local step. This update refers to different ways to solve the resulting constrained linear system but is a slight departure from the methods in the linked TVCG paper.

I hoped I would be able to process collisions as temporary pin constraints, i.e. c(x)=x-p, with x being the colliding vertex and p being the point-of-impact. This would allow some convenient speedups in the global step due to the structure of the problem. Unfortunately processing collisions this way has the obvious effect of sticking and loss of tangential sliding motion, more than I hoped or expected. This goes away at smaller time steps and more iterations, but doing so negates the speedups provided by treating collisions as pin constraints. Instead I went back to the usual formulation, c(x) = n^T(x-p), which required a lot of restructuring of the code.

I’ve implemented two solvers, preconditioned conjugate gradients (PCG) which uses the prefactored mass-weighted Laplacian as the preconditioner, and multi-color Gauss-Seidel (MCGS). I plan to support both solvers throughout the project, as both provide different benefits depending on the problem. PCG relies on the prefactored matrix but has faster convergence and is overall better for general problems. MCGS has slower convergence but does not rely on prefactorization (though the cost of graph coloring is non-negligible). There are some hidden benefits to MCGS: If the constraint queries are cheap they can be queried inside the Gauss-Seidel sweeps. This makes it very effective as resolving certain constraints, e.g. pin and attachment/slide (findings of the TVCG paper). That’s why I aim to support both solvers. 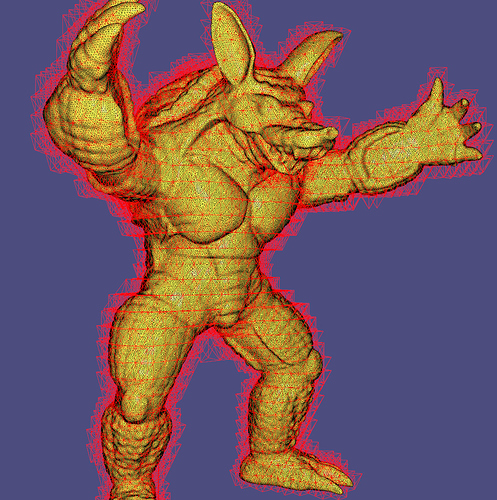 I just read a comment of the user “Lapis Sea” (Blender.Today Q&A #111) talking about IPC. I don’t really know anything about this stuff but maybe you will find it interesting. I’ll copy his comment here:

There came some really cool things out of SIGGRAPH 2020! One of them I took notice in in specific. It is a soft body solver to rule them all. It has an open source C++ implementation under MIT License.

I was wondering if things like this are to be considered for incorporation in to the blender solver family?

Thanks Xnet. The discussion thread might be a better place for this, but I’ll respond here anyway.
Yes, I am familiar with IPC. I don’t see a reason why Blender can’t have multiple soft body solvers and allow the user to choose between them. That’s up the devs in the end.

Here’s an example of a swinging dillo. Reasonably fast when there aren’t collisions. But, I think need to do a better job distributing the mass of the mesh to the lattice vertices - the legs don’t flop around as much as I want them to.

Wow, IPC seems pretty cool, may not be possible to include it under this GSOC, but it seems amazing.

I hope we can end up using the evolution of softbodies here with particle nodes / physics nodes, (IPC or not IPC) to do node controlled simes of noodles and such things

Thanks for the great work @mattoverby
The branch named “soc-2020-soft-body” is where you put all the updates first? I’m using this to test and just want to know the differences between “stalble-vX” branches that you created… I’m interested in the bleeding edge updates so what should I keep track?
In the soc-2020-soft-body I can’t change collision objects parameters, it’s breaking the sim and stops running. I reset the file to default and the sim still doesn’t work so I need to close blender and open it again to get the simulation working. I know that it’s under work and it’s normal but just want to… kind of report it here…
It’s so nice to play with this new softbody system. Thanks!
I also liked the IPC softbody, so promising.

I’m using this to test and just want to know the differences between “stalble-vX” branches that you created… I’m interested in the bleeding edge updates so what should I keep track?

The most bleeding edge version will be whatever “stable-vX” is newest, so the highest number X, which currently is 2. In future weekly updates I will tag the stable versions and explain what features those versions have.

I can’t change collision objects parameters, it’s breaking the sim and stops running. I reset the file to default and the sim still doesn’t work so I need to close blender and open it again to get the simulation working

That is strange. Do you mind sending me your blend file? I’ll have to see how you are using the solver to better understand your issue.

Sorry if it seems quite a noob question, but how do I download this for testing? I mean, I know I have to type git clone in the terminal, but I don’t know what is the link I paste in front of it. I only know how to git clone from GitHub, but not from this website you provided.
I’m not a developer and I’m quite new to this “testing area” of Blender. Currently I can’t do any further than downloading the Blender daily builds lol
Thank you so much :]

Edit: I could download it, just had to click on the “snapshot” button lol. Now I’m just having some problems to build it. I extract it, go to the directory, then I enter make update and then make, but this is output:

And I have no idea what to do next.
I use Ubuntu 18.04. Also, the files from the source code are intact, no changes made.

Well, I did it but unfortunately it didn’t works also. The same errors appear in the terminal. So apparently I just downloaded 2 GB for nothing xD
But if there is something else I’m missing, please let me know.
Anyways, thank you so much for helping. Greetings from Brazil.

A new thread in https://devtalk.blender.org/c/blender/building-blender/11 might be a better place to discuss it than a weekly reports thread.