Not too long ago the blender logo at the top-left of the Top Bar was just a decoration. It later got the ability to show the Splash screen. But it now contains a menu of items: 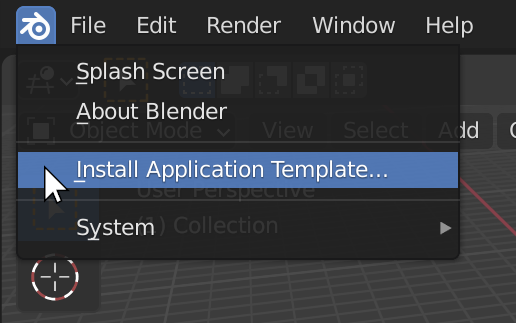 I assert that having a menu there is non-standard and undiscoverable. I have proposed that it should not contain any items that a new or average user should need, and only contain items used by advanced and experienced users.

Pushback on this is usually that it actually is discoverable because the logo has a hover highlight, and that it is similar to the Mac OS “App” menu - although that would be in a different location and be labelled “BLENDER”.

How do you feel about the existing App menu?

It’s ridiculous to have the Splash screen and the About in that weird menu.

Your patch seems to sanitize this all thing, why has not been committed yet?

…that weird menu…why has not been committed yet?

Lack of consensus that it is a “weird menu”, which is the reason for this thread and poll.

Well, that actually surprises me.

It’s mostly a platform-specific thing. Macs have a menu bar at the top of the screen, separate from the menu that is in the Blender window itself. That bar has an apple logo that shows the “Apple Menu” which includes items like “About this Mac” and “Shut Down”. While Blender is the active application that menu bar also includes an “App Menu” shown as “Blender” with a few things.

So Mac users are used to clicking on a logo to get a menu, and are also used to seeing “About” on both that Apple menu and the App “Blender” menu. As mentioned, both of those things are separate from the menu inside Blender. It is a Windows-specific preference to have “About” and/or “Splash” in the Help menu.

So my primary concern is less about what items are on each menu, but more that the Blender logo being a menu is fairly undiscoverable to a majority of our new users. Show Blender to someone who has not seen it before and they might guess what items might be on each menu, but they would not guess that that the logo is itself a menu. We all find out this by accident though, so I don’t mind too much if we put items on it that are meant for experienced users.

Yeah … I discovered it by accident rather late. It is discoverable but a 3D App is not a hidden object game. I like to discover things by logic.

I’d have expected the menu to be called “system” or something similar. Or the closest thing for it to be located under the Help or File Menu.

I assert that having a menu there is non-standard

Lets face it, very little of blender ui/ux is “standard” - it’s not a bad thing.
As long as non crucial and/or dev items are in that menu it fine.

it’s not a bad thing.

It is a bad thing.

The never-ending non-standard way of doing things in blender is what gives it the reputation it has when it comes to UI/UX.
There’s really no reason to keep things weird. What’s the point? Unless it’s a FOSS rule I’m not aware of.

@Harleya Let’s nuke that menu, shall we?

It is a bad thing.

Nah, many specialized tools - not talking only about graphics - have “none-standard” ui/ux and it’s not a foss thing. It’s also not a bad thing if it works, even if it requires some learning. And with most specialized tools it does.
Blender ui/ux is pretty efficient once you learn it. Of course there are a lot of places that could be improved.

There is no standard ui, there are some guidelines - different for every platform.

If you can put it somewhere both windows and osx users find it instead of having a weird place for it,why would that not be better? This whole blender is weird and that’s good makes no sense to me.

I’m also a proponent of moving the contents of this menu elsewhere. ‘About’ and related entries are usually found in the Help menu.

It is discoverable and the items there are fine. Blender may be unique and "not like other software packages, but that is what makes it Blender…why do folks keep wanting Blender to be like others?

why do folks keep wanting Blender to be like others?

Nobody wants Blender to be “like others”, but just to be better. Anything can be improved, including how natural and predictable the menus and items are. This thread is just investigating whether a change is wanted and warranted. Nothing is ever learned unless questions are asked.

OK - that’s one of my new favorite reply videos!

Wasn’t that the deal when Facebook became a sponsor?
Blender 3.0 will have a new top shelf with user Stories.

And where will the things in that menu will go to in this case??

@Harleya the answer to your poll in the way that blender currently is Yuck, but the answer after your patch reorganizing the menus is Awesome!