The new Blender 3.3 on up now use a new form of scaling of Animation Tracks. Before, if we changed END setting, from say 300 to 100, or 400 to 50, the key frames auto-scale along with the entire track. Now… it slices… It cuts into the track. Which doesnt seem right, as we are talking about resizing the track, not cutting it, slicing it.
Next, we do have a ‘new’ version of scaling the track. But… There is an issue. For instance, I import a model I get online, its 4,200 on the animation track and I need it to be 200 key frames (KF’s) and so I have to ‘calculate’ the Playback Scale (new system for Blender 3.3 on up). You cannot use mouse drag for such a radical scale. So you experiment. I found its better to open up Blender 3.2 and open the scene and rescale it there using ‘END’ setting and note the scale, and copy that into 3.3.

But…! (Another but… ) I run into a new problem. The package refuses to export. Yes its an addon exporter. Not your problem. But what do we use Blender for? Making parts for scenes, making scenes, and also… Gaming Assets. TONS of people are exporting their work for Unreal, and other game engines, using addon exporters, importers etc… and I think I may have found an issue with this new system of ‘scaling an animation track’. It attaches a scale to the track, instead of resizing the track, holding a ghost copy of its original in the file, and I think that will (is) creating issues on exporting and conversion of files to game assets.

We can clear scales on parts… but not animation tracks. And this new system may have introduced a new scale ‘issue’.

This is my finding. I cannot use 3.3 or 3.4 and 3.5 presently on parts with existing animations, and the number of animations are intense, so I am locked out of modern Blenders because of animations. And I think this is the culprit, and if I am running into this, others might be also.

Attached is a screenshot of the scene and a typical animation. 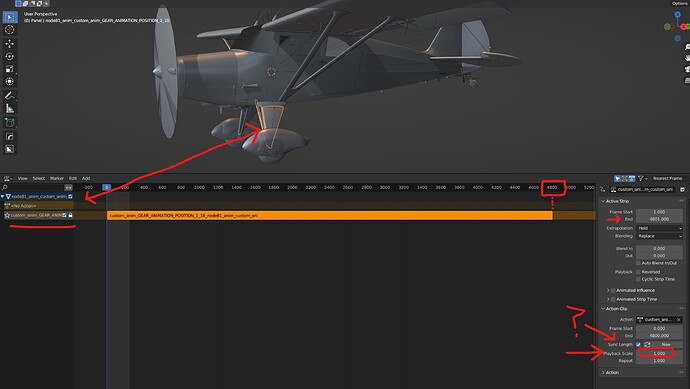 I did try to do a work around where I created KF save points on a scaled down animation track, Pushed that to a NLA Animation, deleted the older one with scale, and zero animations occur, so that didnt work as a fix.