This is important: an output to IMAGE node!

You can already do that with the File Output Node

it’s in the compositor workspace 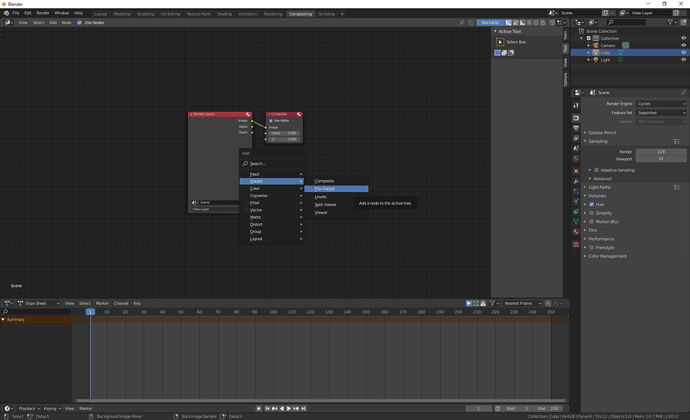 That’s for render and compositing.
What I propose an image output node for the material nodes, which only output note is the material output.
That would allow us to generate and save bitmaps from all procedural maps, map transforms and map ops.

Maybe the refactor can be done for 2.91? It’s not clear in this protocol. It already would makes sense to think about a 2.9+ and 3.0 roadmap at this point.

You mean like AOV? (Not sure if I understand correctly.)

Long time vfx feature film compositor here (shake,nuke and fusion background).
Wanted to chime in as I’ve been using blender for a good while and the compositor has never been up to snuff for anything but slap-comps. I really want to support an opensource compositor. Bummed out by Natrons demise.

In a feature film pipeline, a compositing app is at the very center for anything that will end up in an image. From ingest, to vfx conform, to texture creation and conversion, to dailies QT and slate generation, to export and packaging to client, to render targets, to tracking, to roto, to QC and to compositing.

A comp app no-longer sits at the end of a render pipe, its pretty fluid in its place and most companies have built their pipes around compositing apps.

Tools like NukeStudio and DavinciResolve tries to take it a step further with encompassing the vfx editorial portion of it too but that’s beyond the scope for the compositor in Blender. But Blender does have a potential framework to compete here. Id love for the VSE to be my nr1 vfx conform tool. But I digress.

For individuals and small teams, I see requests on blender.today about adding bloom, lens distortion, tone mapping etc straight to the render. But the whole concept of a post-processing stack should happen in the compositor anyway. Its the framework to develop anything that deals and manipulates images.

For texture artists and lookdev, its all images and procedurals anyway, why not tie in the concepts of image manipulation and the toolset of the compositor into the texture generation process ? Substance anyone?

For vfx compositors, we’ll we need fast, interactive and flexible tools. Where every operation can be a node.

But if we’re talking concrete examples, here why Im not able to use the compositor for any film work right now:
Missing features
Deal breakers:

Important features to have

Other notes
The OpenFX platform is stale, and should NOT be used as a target. Its original developers and maintainers (The Foundry) fled from their own standard when they acquired Nuke. While its nice to have OFX compatibility that should not be looked at as a potential framework.

Im not interested in Blender just copying existing programs, but keep in mind that compositing as a platform is very much a stable and mature concept. The only innovation seen in Nuke and Fusion are in minor UI/UX improvements and in the fields of AI/ML.

There’s a lot of potential in making the compositor a non-stop-shop for anything image related.

I’d add easy use of compositor for image editor filters to that list, but the image editor needs to be improved to be a real image editor first. Get proper support for multilayered images and utility layers and such. Overall blender could use more integration between it’s editors.

Another major issue that is a deal breaker for serious composite work is the lack of time related tools. Holding frames, referencing other frames in the tree for various temporal tasks is a must have.

++ Holding Frames — especially in the Loader nodes. Also setting them to loop would be nice

+1 for time related UI improvements. For example there are differences between the way the VSE represents shot start and end and the way the Image/movie node does. If we can’t “send” clips between VSE and Comp, perhaps we could more easily send Metadata like clip start/end, speed, reverse etc.?

I imagine at least a dynamic link between assets so that they play in a synchronised way. So you could have a VSE timeline view below the compositor, so that you could slide and trim the clips as required. You could visualise the active asset (strip) by isolating it in the VSE preview monitor. This is much quicker than cacheing from the Preview node, at least for line up and timing to sound.

Are you guys aware of this re-coding of the compositor project? 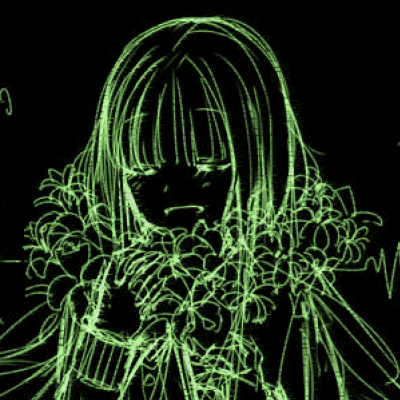 Contribute to m-castilla/blender development by creating an account on GitHub.

“This is an experimental and unofficial Blender branch (https://www.blender.org/). Its main goal is to improve the performance of the compositor. It may tackle some of the objectives described in this task: https://developer.blender.org/T74491 . But probably not in the same way as proposed.”

Experimental builds can be found at Graphicall ex. Win here: 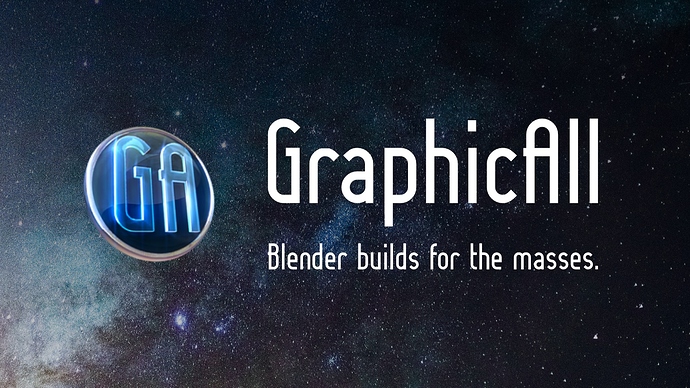 This is an unofficial Blender branch. Its main goal is to improve the performance of the compositor. It may tackle some of the objectives described in this task:...

Can you have a look at Compositor Improvement Plan: relative space ?
Need your feedback on this topic.

I am a bit late to the party and I am new here. Plz forgive me if my etiquette is not aligned with the community’s (feedback is much appreciated). I am relying on Blender heavily in my research. It is by far the “BEST” tool ever. The one thing I desperately need in the compositor is having multiple viewer node output to different images. Currently (Blender 2.90) only the active viewer node outputs to the image editor. I use multiple AOVs and wish to access their output from memory or at least from the image editor.

I don’t know if this thread is still active, but just in case I wanted to point out one of the main issues I have when rendering from the compositor, which is that the file output node does not output cryptomatte metadata in a useful way (it all gets mushed together into a single channel, and becomes unusable in 3rd party programs such as nuke).

I also wanted to point out to this thread that I opened a while ago about how to make the passes’ naming more flexible and practical (in my view), that I think may be of some use here.

Anyway, I hope the compositor gets some love! It has a huge potential, but unfortunately it lacks a lot of optimizations (and features that are mentioned here) to be as a production-level tool.

Scene node – A node that allows to import the render of a scene – This node could have it’s one render settings, like render engine, sampling and camera to render, and would allow to include a scene anywhere in the composite.

This sounds like using a second “Render Layer” node and setting the second one to a another scene. This is possible right now. And of course you can use different render engines, for example to get the EEVEE bloom on top of a Cycles Render: 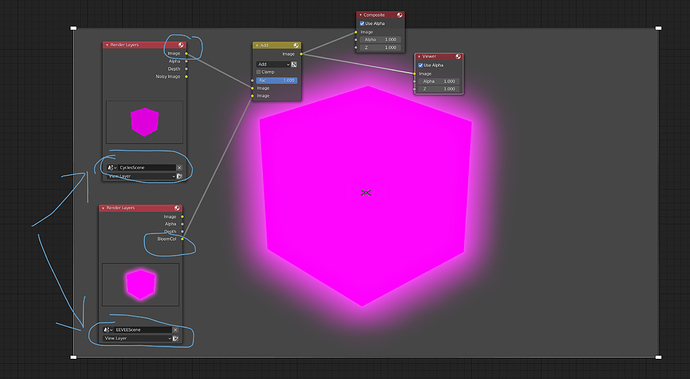 There are new builds up of the Compositor Up fork which includes many improvements. The latest adds a Camera View node and Auto-Compositing.