Adaptive Sampling is AWESOME, but one question

Thanks @StefanW for adding adaptive sampling, I actually got Cycles to outperform Redshift considerably with one of Saul’s Redshift for Blender files! To be fair though, Redshift does have clean and sharp refractive caustics, but still awesome considering Cycles was considerably slower before your improvement. By the way, Saul reported to me that GPU + CPU rendering was actually slower than just GPU rendering on his dual 2080 ti machine with dual Xeons. It doesnt go out of core, and on my single GPU system the CPU did make the render faster…so possibly a problem with dual GPUs?

Anyway, the question. It says in the tooltip that if min samples is set to 0, then the min samples used by the engine will be based on the AA samples. What does this mean exactly? Trying to figure out what difference max samples makes to automatic min samples.

Redshift (approx 488 seconds on my machine): 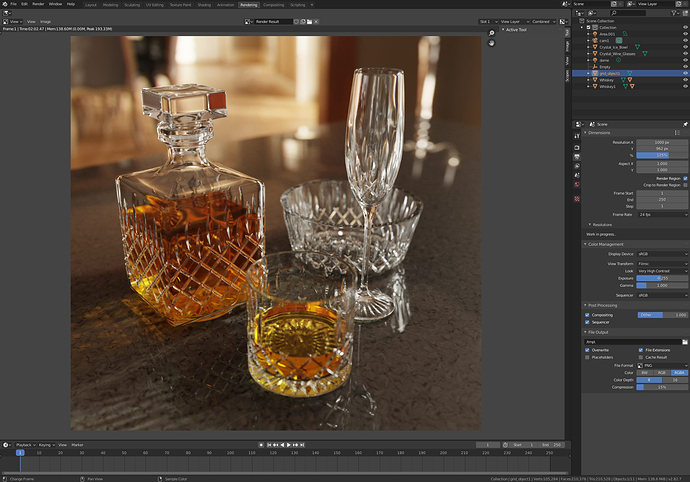 Cycles 140 seconds (approx 3.5 times the speed of Redshift on my machine, finished with denoiser though): 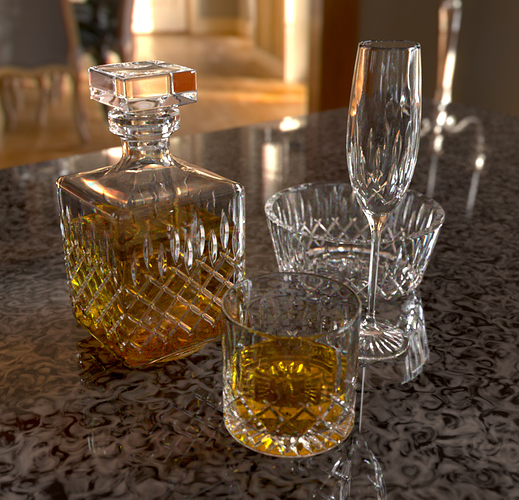 Cycles again (180 seconds), but this time no denoiser, and simpler glass material (no dispersion), this rendered 2.7 times faster than redshift on my machine. Saul didn’t get as good results for some reason, not entirely sure if he had adpative sampling working properly as his results were closer to my non adaptive results. 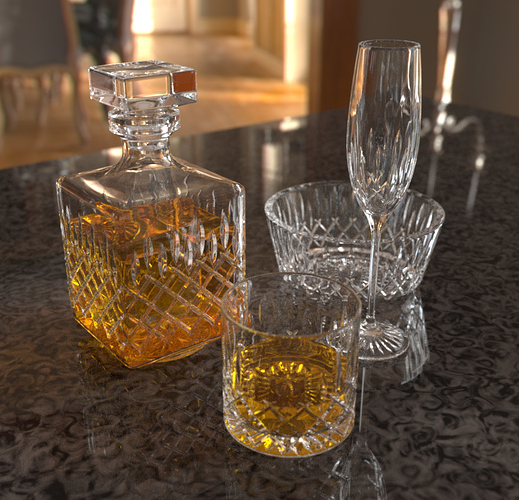 Redshift for blender isn’t publicly available yet, so i’m calculating how long it would take on my machine based on the speed difference between cycles renders on Saul’s and my machine.

Anyway, the question. It says in the tooltip that if min samples is set to 0, then the min samples used by the engine will be based on the AA samples. What does this mean exactly? Trying to figure out what difference max samples makes to automatic min samples.

Min Samples is set to the square root of the number of AA samples.
https://wiki.blender.org/wiki/Reference/Release_Notes/2.83/Cycles#Adaptive_Sampling

awesome thanks, sorry about that, I was checking in the manual rather than your link.

Redshift (approx 488 seconds on my machine)

Where does one get the redshift add-on? Did I miss a singup for this >.< ? I can’t find it on their website.

it’s not available yet, released in the coming months I believe. Looks incredible though, those caustics are insanely good, renders like lightning too.

I’ll probably give it a wide birth though, just because the main benefit of Cycles is it’s tight integration with blender, so it’s just a lot faster to actually work with. Although those caustics are incredible, and it doesnt have the shadow terminator bug which haunts cycles…hmm.

Oh sure, TBH I think cycles is better in more aspects than not at this point, but RS is a nice alternative that is “industry proven”. And yes the way it deals with volumetrics+transmission is very nice! Also redshift handles instancing very well. Can’t wait to get a hold of it in blender. But yes it seems that I missed out on beta testing, or you did the same scene in another 3D software for testing?

Saul posted the scene results on facebook, and he sent me the scene so I could test in Cycles. So I haven’t actually tried the scene in redshift personally (i’m not on the beta).

it doesnt have the shadow terminator bug which haunts cycles

Wha?? I thought that bug got fixed back in 2.81? Or was that some other terminator related bug?

I can’t sorry, it contains elements that aren’t free.

That was related to normals only, but doesnt help remove low poly artefacts.

The shadow terminator bug seems like Cycles achilles heel, reported/discussed thousands of times since 2013. It’s a real shame, because when clients send low poly models that are un-subdividable this makes Cycles completely unusable. The odd thing is the same guy that wrote this incredible adaptive sampling feature (@StefanW) , has already implemented the same fix appleseed use, but it was never added to the master builds.