The main goal of this meeting was to identify the most pressing bug fixes & papercuts to work on in the Animation & Rigging module , in order to make 2.91 as polished as possible, and to discuss limiting the open amount of work & ideas to flesh out. That is, to make sure ideas are implemented & finished, or scapped/put in the freezer, before piling on more ideas-to-do on the workboard.

To keep the discussion focused, the meeting was timeboxed to 1 hour.

No new short-term goals were added.

The list of TODOs on the workboard should reflect a limited number of things that can be picked up by anyone. This means that these tasks:

It was decided to cap the maximum number of TODO items in the tracker to 10. This is the same number as the Cycles project is using. It also corresponds to broadly 2 TODOs per developer in the module, which is kind of nice.

To handle the current number of TODOs (48) the following structure was thought up. With this, existing TODOs can either be moved into the right spot, be re-tagged as “Design” when their description is not specific enough yet, or several TODOs can be merged into a larger design task when they are about the same broader topic.

Existing tasks can also be moved to the wiki, to one of two lists on a “Decided not to do” page, or to a “bigger project” page:

Each task on either “decided not to do” list should get a little explanation of why it’s there, what made it difficult to do, and a link back to any related task on Phabricator. The task on phabricator, when it’s closed and moved to the wiki, should get a link to the wiki.

How to proceed further

Sybren will do a first pass of the current TODOs, to quickly weed out tasks that are clearly not TODOs as per the new definition. After that we’ll open a simple poll to ask people which TODO they find most interesting/pressing/important. This will be announced in #animation-module.

Bassam voiced concern about how changes & fixes to constraints are handled. On one hand we should be very careful to not break existing rigs, but on the other hand we should welcome developers who send in patches that actually solve concrete problems. The current way of working within the module, where we make more custom test builds of Blender, is a good start, as that allows for testing on various existing files. Luciano added that it may help to point out specific versions of Blender that may include potentially-breaking changes, such that patches can be more easily accepted but put on hold for specifically that release.

Daniel Salazar expressed that the release notes should have a clear list of changes to constraints, to make it possible to test rigs on new/upcoming releases.

By Christoph Lendenfeld: T81836. In one glance, a task description like this shows what it is related to, where to get a test build, and what the larger context is for the task. 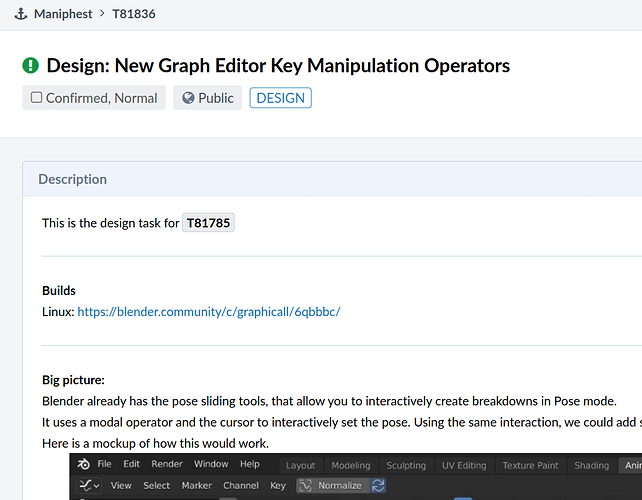 The next meeting will be on Thursday 12 November, 15:00 CET/Amsterdam time. Again it will be open for everybody who’s interested. The provisionary meeting agenda will be linked in the #animation-module channel a few days before the meeting.

Addendum: T82210: “Bake Action…” bakes wrong on flat curves was discussed. It was agreed upon that the operator is doing two things (baking an action and cleaning up the resulting curve) and that the cleanup pass should become optional.