The Video Sequence Editor - Reworked (a ready to patch suggestion)

Thank you for sharing you thoughts, however my original suggestion is concerning how to improve the VSE interface. The UI can be improved by changing “external” python scripts, which can be handled by add-on coders.

What you’re talking about needs to be fixed “internally”, and right-click select may be a better place for your suggestion.

As someone that has been around the park for too many years regarding the VSE, the best advice is do the work with no expectations.

That sounds odd, but the VSE is essentially a dead end as it is currently coded. There are far too many glaring problems with pixel handling to make it fit into the current “top need” usage of even the Blender Institute’s projects. I’ve written extensively about this issue; it is a core confused identity issue.

In terms of rearranging the deck chairs on the Titanic, just hack the bits into shape and then play the meritocracy political game.

if i have clips from two different sources with different frame rates, i can’t just import both of them in VSE. i need to first convert them to a common frame rate.

This is impossible without proper compositing based tools to resample image buffers. Frame skipping etc. is garbage.

most people don’t need any other fancy effects , they just want the ability to import clips and cut and join them, with basic transitions.

Don’t make wanky assumptions about “most” and other crap. Realize that the VSE is part of a larger project and that it must fit into that design paradigm. In terms of the highest grade needs to be met, the BI’s Open Movies should be a key target, complete with their unique needs and higher end output requirements. Smaller studios would also be in this need outline.

Making garbage claims followed up with “most” just screams that you aren’t paying attention to key design needs, and makes your opinion part of the problem.

What essential strip-editing functions are missing in the VSE?

If you want to try it out download this file: https://blender.chat/file-upload/TdDfEq2GuEMcCwhmo/VSE_Menus_Reworked_v2.zip and do as written in the readme.txt

How the changes look right now - I need help fixing the Markers Menu and the Timecode Style menu:

The idea is to keep the menus short and then add shortcut keys for all of them so they will work as pop up menus at mouse point.

So, in other words, it is possible to add new functions to the VSE only through python, so the question is what essential strip-editing functions are missing?

(NB. this is just a suggestion, not a patch)

What additional edit functions(existing python operators) should we add?

Installation:
Place the two files included into these paths before starting Blender 2.80:

A new home for the VSE Reworked files: https://github.com/samytichadou/blender_vse_reworked

Even though there has been some interest in the VSE lately, this still feels a bit like rearranging the deck chairs on the Titanic, like Troy explained.

It would be both, extremely interesting and helpful to think about an entirely new VSE design. How would a modern VSE design look if we were to remake it from scratch?
This would give us a better idea of how much work a VSE rewrite would need, even in early stages of the design process. And it would probably raise interest of developers (I’m personally interested, but shy away from designing such a beast given that I’m by far not experienced enough in video editing).

We then may still decide it’s worth working on the current VSE UI. But I suggest to first get a rough idea how the future of the VSE may look and how far away it is.

@tintwotin: This generally seems like some ok UI improvements. I have a few minor nitpicks, like the order of the Add and Select menus could be made consistent with the rest of Blender. Or we could re-order them everywhere else to fit this?

We should also add the contextual menu to the Sequencer too, inside space_sequencer.py. Look at how this is added for the other editors.

@julianeisel: I agree with your sentiment overall, that it would be good think ahead, and reconsider the way the sequencer works. It’s both not competitive in terms of technology (inability to handle hardware accelerated 4k or 8k streams), and in terms of UI and interaction (Look at Resolve or Final Cut Pro X, for examples of modern video editing).

However, these changes are really minor in the grand scheme of things, and really only make the sequencer more consistent with the rest of Blender. These changes don’t hinder a larger Seqencer re-write, which may or may not happen, or at the very least would likely take years.

We should not limit ourselves from making minor UI fixes because of a phantom re-write far off in the future.

I think everyone agrees on the VSE needing a full overhaul, but these small improvements in UI and handy tools are needed anyway and most can be implemented in a full VSE re-write in the future (there’s only so many tools in a Video Editing software). Especially with a team of enthusiastic users willing to maintain the Python code.

@tintwotin Yes a lot of features can be implemented through Python only, that’s why there are so many add-ons doing crazy awesome things. Some of these tools might be already in big add-ons such as PowerSequencer by @GDquest ! Perhaps the more general ones are already implemented and tested and can be brought in as built-in operators.

We should not limit ourselves from making minor UI fixes because of a phantom re-write far off in the future.

@julianeisel It is possible to add some new functions this way, so it isn’t only rearranging and a few has already been added. This work does not solve the main problems of the VSE, but the current work on the cache makes me hopeful. For now, this is only what I/we can do with python which means mainly UI stuff, but extract, “select under cursor” and “select channel” has been added. I’ve spent a lot of time trying to understand and write down the challenges I see with the current VSE: you can find links to the open shared documents here: https://blender.community/c/vse/nbbbbc/shared-docs-suggestion-and-addons-for-the-vse

The redesigning the VSE for the future would have to start with coding an Eevee equivalent video handling engine or enabling the possibilities for using the VSE for unrendered Gpencil/Eevee filmmaking, maybe by separating scenes from sequences, so the VSE only will deal with sequences like the text editor only deals with text independently of the current scene, so in the same window you can work on a scene and add that scene to the sequencer, change scene without changing the sequence, work on that scene, and add that to the sequencer.

Or playing the sequence which automatically switch scenes and cameras within those scenes, so the 3D View could be used for previewing the sequencer, and you could immediately work on the scene where the time cursor in the sequencer is.

@billrey I’ve swapped the positions of Add and Select(I arranged them in the order the users will need them - but no worries). The is a bit of contextual stuff going on in the Strip menu - depending on what type of strip is selected.

But for contextual popup menus I would suggest you tried VSEQF add-on which have right-click-and-hold popup menus which are contextual depending on mouse position ex. over strip, time cursor, handle, empty area. Is this the kind of menus you’re thinking of? (I don’t think, I personally will have the skills for coding that stuff - but someone else in the community might)

When the patch is accepted, you can download it here: 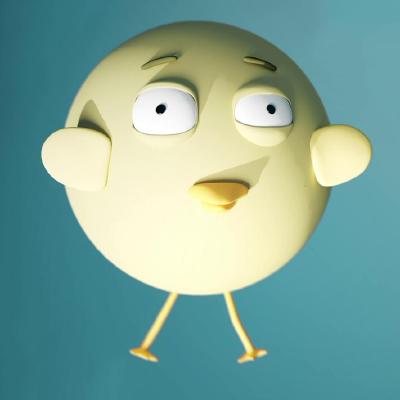 Great. Btw, the contextual menu is really quite easy to add, but I can also do it, no worries.

Perhaps there can be a useful thread here on devtalk to begin discussing the design needs for a Shot View interface element?

I’m willing to slog at the wiki component, assuming there is a reasonable place for it?

I’ve modified the Video Editing workspace UI in Blender 2.8 slightly. And also added some feature requests. My Suggestion is less Menu and please add Icons for simple and easy workflow as we have in other Workspaces. 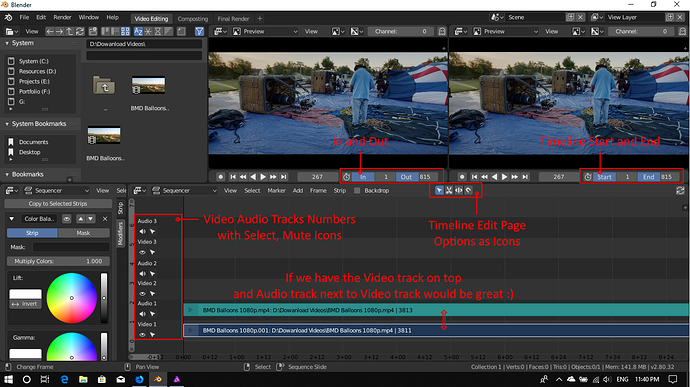 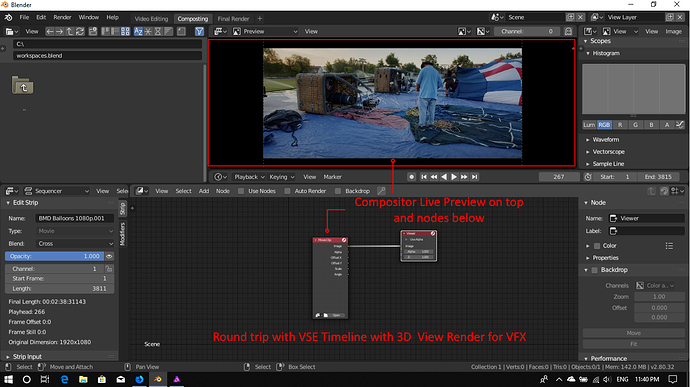 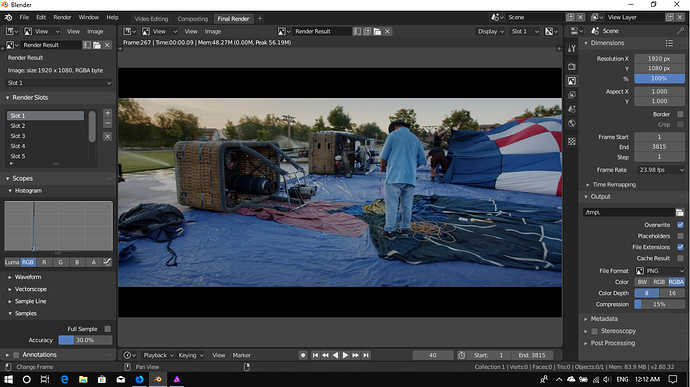 This isn’t a feature request thread. This is about doing work.

I would like to add some shortcut keys for ex. the menus (like Shift+A for ‘Add’ menu), but except from avoiding doubles in the VSE, are there any other consistency things or anything else I should know, before starting on that work?

If there’s a way to contribute Python code, and if we can turn some of the tools we make into built-in operators, that would be a pleasure!

I’d also gladly contribute to a full redesign doc, now we’ve edited… ~400+ videos with Blender? Would you have a design document dedicated to another area of Blender we could use as a reference, to produce specs that devs could work with? @tintwotin is already doing a lot of work, and thanks to him we have a solid collection of ideas to work from. On top of past proposals.

Just ping me anytime, here or on Twitter, when you need me. I just need a clear task to contribute without stepping on other people’s toes.

The work I’m doing is altering two native Blender files in python, which determines what additional python vse classes to import at startup, and another py file which sets up the vse UI. Since they are native Blender files, they can be submitted as patches for inclusion in the official Blender - if the Blender devs like it and the code complies to Blender standards. That’s my ambition, but I need help: https://github.com/tin2tin/blender_vse_reworked

The other way to add py to the official Blender is by including add-ons.

This is how the suggestion for the VSE Menus is looking right now:

VSE_Menus_28nov.gif707×553 866 KB
A toggle audio on/off button has been added, toggle all modifiers on/off in menu, zoom border and such things have been added.

I feel some more “Edit” and “Navigation” functions could be useful?

Pablo, did you go ahead and work on a redesign of the VSE Sidebar/Strip Preferences Panel? If not, should we try to do a working suggestion(basically a patch) for inspiration for you guys, like we’re doing with the VSE menus? (With no strings attached)

If yes, are there any other guidelines except now panels should be only one column? And the width and design should match the (general) Properties panel?

For me, design-wise, the main thing is to get the functions most used moved to the top of the panel, while still keeping things organized. Maybe an info tab and a proxy tab could be introduced?

For anyone wanting to adjust the vertical size of the strips…

The look changes from…

Nice find! I went ahead and committed the change since it’s pretty harmless and a much better use of space. Thanks!

what does it look like when you have the numbers in the corners now?..
UPDATE: no worries i looks good.

A fix that would be great, when you are on the video editor if you use up and down arrows, the play head should go to the previous (up), next (down) edit that is close in the timeline, when youre hoveing your mouse over the VSE editor