This thread here is about changing certain aspects of the UV tile grid described below. It was requested that community feedback be gathered before moving forward with addressing some of the issues so that the decisions can better be documented and agreed upon first.

What I would like from this thread is artist and user feedback for each of the proposals and issues below. If something egregious has been forgotten or is not mentioned, please do so and I will try to compile/organize the feedback as best as possible.

Issue 1: Should the UV tile grid disappear as soon as an image is loaded in the UV editor space?
This behavior seems confusing and there’s been some feedback around it already which is noted below. However, addressing the issue has spawned further questions.

Proposal: Move forward with D11860 as-is. It will do the following:

Issue 2: Should there be a way to disable the grid entirely? Should it be part of the Overlay settings and UI?
I believe this is a relatively straight-forward and uncontroversial issue to solve. The grid should be toggle-able on/off just like the 3D viewport grid AND it should respond to the overall Overlay toggle setting as well.

I believe it’s also a user expectation that the grid configuration live inside the Overlay popover instead of the N-panel; just like the 3D viewport grid controls.

Proposal: Move forward with D11862. It will do the following:

Issue 3: The grid allows(requires) manual dimension adjustment, which can be annoying and unintuitive, after certain operations take place
How can the grid dimensions better serve the the user and artist? Does it need to change at all? Is there a better default like say 10x10 or 10x1 or something else? Should it just automatically adjust?

On the one hand, some users appreciate the ability to define the grid dimensions however they see fit. On the other, some users may appreciate one less item to manage in their workflow.

Issue 4: Feedback required: Should the grid be shown in Paint/Mask/Viewer modes?
Right now the grid is restricted to UV Edit mode. That feels somewhat artificial. Technically the grid works “fine” in the other modes already. In fact, the grid will be shown in these modes when there are no images loaded (now and after Issue 1 is addressed). It does this so that the editor canvas is not completely blank on first use.

There’s a variety of things to consider here:

Proposal: After Issue 2 is addressed, show the UDIM grid (as configured) in Paint mode as well. Do not show it inside the Mask/Viewer/Render result modes. No opinion around automatically toggling the grid display.

Example of what the grid looks like in Paint mode - I’ve scribbled a light-blue stroke between both tiles in 1 stroke below as an example: 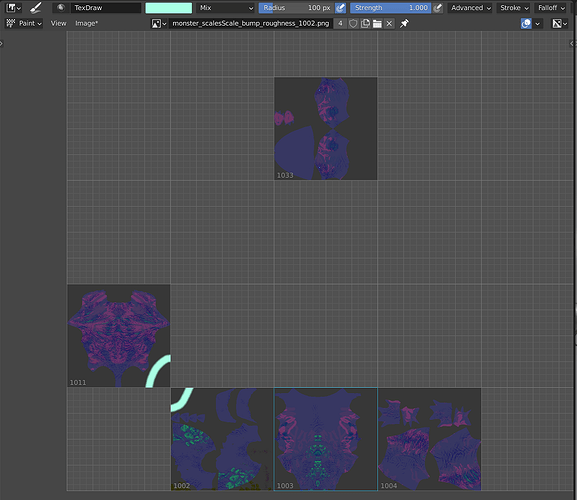 Issue 5: Feedback required: Should anything special be done when displaying non-square images?
Technically the grid also works “fine” for this as well. It just looks very, very weird of course.

There’s only 2 options really I think:

Paging @JulienKaspar and @DanielBystedt for feedback and general FYI on this topic in case they have further thoughts and feedback.

Thanks for creating this thread! Much easier to talk about this on here.
I fully agree on issue 1 & 2. For issue 3 I only have one thing to add:
Not everyone is using a UDIM workflow. If you are creating UV maps for procedural workflows and purely use UV maps for raw vector coordinates, you don’t care about 1:1 UDIM grids.
So it does make sense to make this an optional feature. So users can choose to either use an automatically scaling UDIM grid overlay or the default 1:1 grid,
maybe even a truly endless grid that continues in all directions like the 3D viewport overlay.

On issue 4: I think the grid is too distracting when images are already displayed. Right now I don’t see a reason for the grid and images to be shown on top of each other.
This must also not be left to the user to decide by constantly toggling the overlays on/off between modes and editors. The overlay should be smart enough to be most useful in any context for the user.

Extending UDIM grid infinitely is not a bad idea also.

Solving UDIM grid visibility (issue 2) could be done with opacity slider inside overlays. It can give much granular control over the visibility than on/off switch.

As an overall feedback I’d prefer to have the UDIM grid always visible in any situation where we’re dealing with image textures (paint mode and image viewer too), no matter if there’s images loaded or not, with the option to enable/disable it just as with the overlays on the viewport, an opacity slider would be a nice thing to have too.

Another thing I find slow to work with is having to manually “fill” the UDIM tiles when I load a texture, just so that Blender can load the rest of the images. It feels counterintuitive and it doesn’t make sense if the “Detect UDIMS” option is enabled when loading textures.
I’d expect that checkbox to actually “detect” or find how many images I’m using and setup the UDIM grid accordingly.

If you are creating UV maps for procedural workflows and purely use UV maps for raw vector coordinates, you don’t care about 1:1 UDIM grids.
So it does make sense to make this an optional feature.

Yes, that makes sense. I’ll make note of this scenario in the original post.

On issue 4: I think the grid is too distracting when images are already displayed. Right now I don’t see a reason for the grid and images to be shown on top of each other.

It sounds like there’s a point of contention here. I’ll provide an example above of what Paint mode looks like with a modified version of the Monster demo file so you both can see the grid in that context. Nothing too surprising.

I’m hesitant to add it to the normal image viewer. The overlay settings are shared across the modes which means if you have a 10x5 grid configured while UV editing, if you display a “normal” image, that same 10x5 grid will still be used. And because that normal image is most likely going to be a non-square aspect ratio, that leads to Issue 5. If you were a typical user, and this happens, would you file a bug?

Item 1 has been addressed but item 2 is still outstanding and needs a bit more feedback now that some pieces of GSoC 2021 have landed and from some feedback I’ve received on the review.

Here’s a practical example of what’s being discussed: