It would make sense to either change it to the actual version number (same as shown in splash screen) and/or build hash, as it apparently shows 2.82.7 for both the 2.82 and 2.82a releases?

The Blender sub-version is used internally to manage the minor changes to the file, we could even hide this from the splash screen since (status bar) it is a little confusing when we also have minor bug-fix releases.

we could even hide this from the splash screen

I guess you mean status bar?

I find that this information can be quite helpful when triaging bug reports or helping users with support issues.

For bug reporting we want the build hash, the subversion isn’t needed and often isn’t changed for weeks/months so it’s not all that helpful.

Personally I think it would be nice to remove some of the techy details from the splash screen. Show just the friendly version and it becomes more noticeable and there is less detraction from the image: 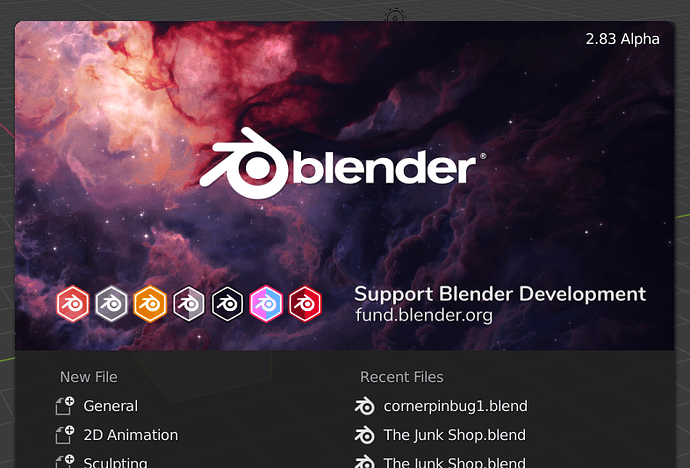 And then put the details elsewhere… 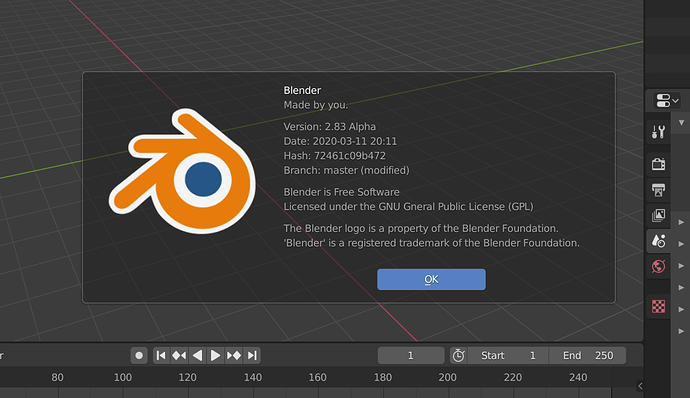 @Harleya having details like this in “Help -> About” seems fine, don’ think the big Blender logo is needed though.

don’t think the big Blender logo is needed though

Sure that logo could be made smaller or different in some way. But having it would a pretty flourish and I think Blender could use the occasional extravagant flourish. The app tends toward looking techy, plain, tabular, and serious. It is nice to include some humanizing touches.

Images or not can doesn’t need to be decided now.

If this is something others in the UI team are fine with, I think this is a good design task to leave open for a new developer to implement - as people are often looking for places to jump in to Blender’s code.

Not sure of that to be honest. This would basically remove almost all the items from the (very hidden) blender “logo” menu and put them in a place that they can be easily discovered.

It’s all implemented, but dependent on https://developer.blender.org/D6859. Looks like this now, although I have since fixed the “General” typo. LOL… 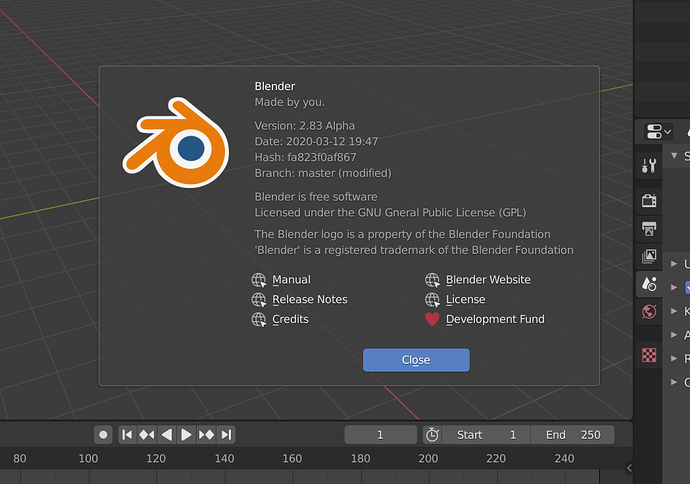 I would let branch info in splash screen if it is not master to quickly identyfy which build it is.
If someone run non-master branch blender (s)he should know that it is not master.

This idea seems generally okay I think - it’s nice to remove superfluous and confusing info from the splash screen and status bar.

However, I would prefer not to use a modal dialog with a bit Close button. We could instead do something like this: 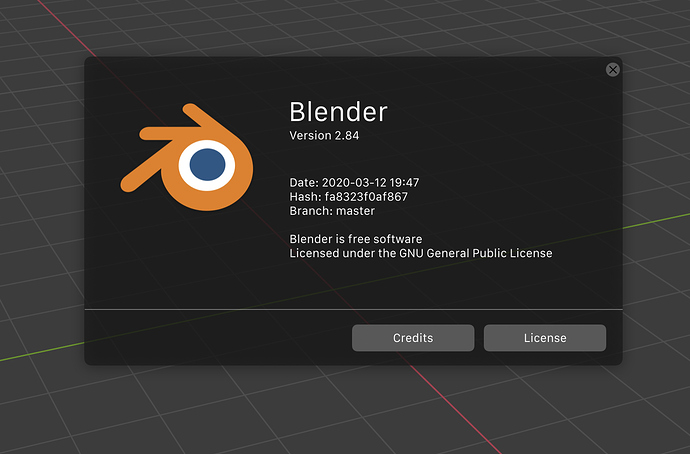 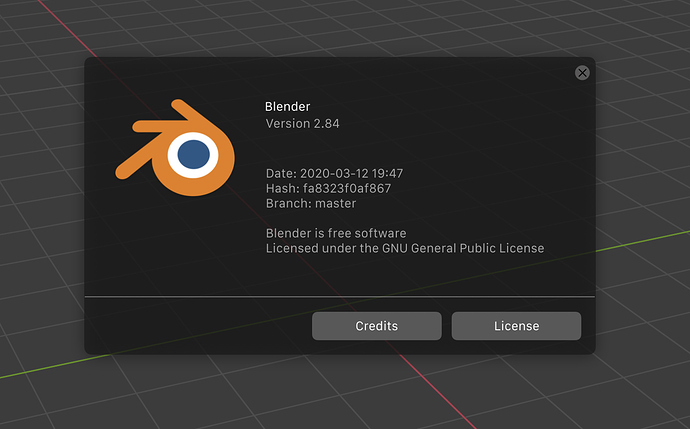 However your version shows version information, credits, and license. I was trying to get more on that so we could (hopefully) remove the items on the current “logo” menu. I’m sure the existence of that menu is unknown to many of our users.

Here is how it looks on my own computer this very minute: 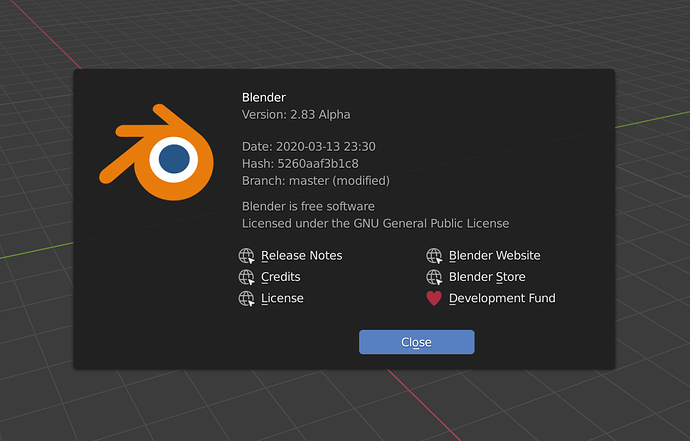 For bug reporting we want the build hash, the subversion isn’t needed and often isn’t changed for weeks/months so it’s not all that helpful.

Absolutely the hash is the one we want for bug reporting, but having the subversion number in the corner can still be useful.

For example: User A makes a report. User B comments on a report with a screenshot and no hash. If the subversion number B has is different from the one the A has, then it sometimes is possible to see that the issues actually aren’t the same without having to ask B for their hash. User B might have an issue that only affected one platform and has already been fixed for example.

Another example: T75050 has no hash. Of course this an incomplete report, but seeing the subversion number in the corner of the video lets me know not to continue looking only at the latest version of master.

But mainly I want to keep it for helping users with support outside of the tracker. If someone posts a screenshot or video on blender.chat, a forum, twitter, YouTube, or a discord server, it can sometimes show that the issue they are having is due to using an older version. It is easier to point out if I know that the issue has already been fixed, without having to ask them what version they are using, then explain to the less technical adept users how to find out which version they are using.

The original reason for me to write this post was that the subversion alone isn’t enough anymore when both 2.82 and 2.82a show the same value (2.82.7) in the status bar. Why not change the status bar to read 2.82<patch> (<subversion>, <hash>) or something like that? This way all necessary information is visible with no room for ambiguity.

I definitely agree that what is shown in the status bar is wonky, but I’d rather it be removed from there completely. I just don’t like having static information included in a status area meant to show dynamic data.