Quick effect smoke not showing up

I am new to blender. I am using windows 10 hello & blender 2.82. After opening blender, a popup came & I clicked “general” then I deleted the cube & add monkey head. then applied quick smoke & playing it but can’t see any smoke. I saw in settings it was set gas in domain & it was set to smoke inflow. changed the resolution 64 to 150 then also I can’t see any smoke( light is on). Don’t know what is the problem. Plz help. I also recorded screen but as I am a new user, It is not allowing to me attach this mp4 file(size 3mb). plz help or give me mail id, I will send this screen record to you for better understandings. 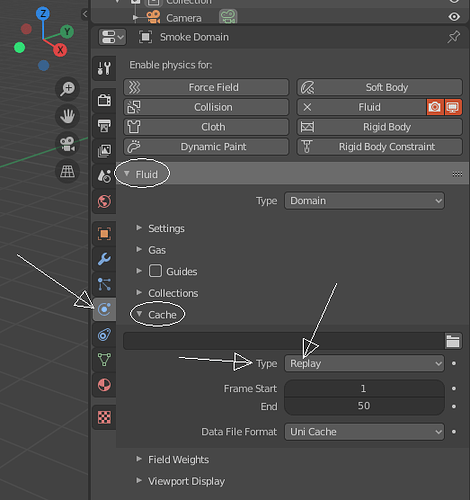 With modular you need to bake first…

You might be referencing old tutorials that utilize the old system of working with simulations in Blender. In Blender 2.82, a new system for fluid and smoke simulations is being used that is called “Mantaflow”.
The name itself should allow you to search for new tutorials on Youtube, so most of your problems should be solved that way.

It is better in several ways than the old system but at first it required the simulations to be baked before playback, you can bake several aspects of a simulation independently from each other and be more productive but because of high demand of the old instant playback feature, the replay mode was added.

The “Replay” method is slower than the “Modular” one mind you, so its better that you do your own experimentation and decide what you’d want to use.

Yah. I noticed that “Replay” is very slow. Thanks, for the suggestion.

for the video, we sometimes use imgur (:
Also https://developer.blender.org/T73799

I’m facing the same problem. First time using blender, added quick smoke effect to suzanne. But when i hit play, the smoke is dark grey & tansparent (the color was set to ashy-white). The cache is replay.