Animation and keyframes are visible through multiple spaces : nla, graph, sequencer, timeline, etc… When it comes complex animation with a lot of keyframes / clips / actions, we often zoom in the timeline to better edit these things. But when we start the playback, we can not see what’s happening when the current frame is offscreen.

In my opinion, it is inconvenient for some uses, in the vse, the graph editor and also for the dopesheet.

I propose to make the timeline move instead of the timecursor.

This is just a mockup from the video editor, but it is the same in other editors

One main problem from the user perspective is the noise that makes a moving timeline in the view. It could be very disturbing on that point. BUT if the time cursor functionment is optional, the problem is a functionality.

Another problem is the performances involved in it. Normally, just the timecursor is updated, not the timeline. Updating the timeline can be really heavy when dealing with lot of keyframes.
This is half a problem, because if the scene is too heavy, the functionality can be turned off.

This thread is about having feedbacks on how useful it would be for you, and if you think it is really useful and not too much of a noise.

Using the demo thene of rain_restaurant, the performances are the following :

*The tests were done in the same conditions with the scene layout, with and without the graph and vse(video sequencer editor).

This is a regression of 30% fps when using a dynamic graph view.

I added a lot of my 1080p animation in the vse, and performances are :

The timeline was looking like this and I tested zoomed in and out, perfs are the same.

I’ll add performance tests for the graph editor if needed.

This is great. I use Resolve, and they have both options, and they are both useful. option 1 is good for small refinements zoomed into the timeline whereas option 2 is good for a more general overview.

I also use another software and used a bit this option. I recently tried to do some video editing in blender, and it was so disturbing that the timecursor goes away. And in fact, this behavior is for each editors with a timecursor. Someone said that for the graph editor, it would be also super useful.

Builds for a MVP of Timecursor modes in the VSE are available at Blender Builds - blender.org patch : D13070

It’s just a little test, feel free to give me feedback.

A patch is ready now. Some changes have to be done in term of ui, but here is the basic implementation.

In the settings, a new option is available in the animation panel for the floating mode.
I’ll make some demos later on.

@Kdaf Does your patch deal with the existing Follow Current Frame option? Should it be removed? Or does it work well with your work?
Timeline Editor: 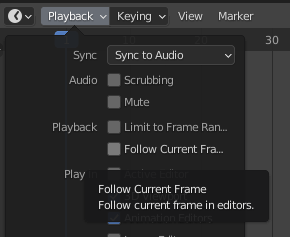 Thanks for pointing it !
I did not know such an option was available, I’ll adapt my patch to include this. There is no big problem, but the floating mode has some issues with the follow current frame.

Thanks for your contribution