@brecht I tried your suggestion of making a variant of blender_add_lib for dynamic linking:

But it still tries to use hbridge.o/.obj when building blender.a/.lib, apparently:

The function houdini_Modifier_runtime_ensure() is a static function of hbridge implementation, there is no reason for the blender project to even be aware of its existence…

I first though it was because the build system would force static linking of what is in BLENDER_LINK_LIBS defined in blender_add_lib but I could not find any other references to this variable in the CMakeLists.

@Dev1 Thanks for giving it a though, but imho this sounds a bit overkill. ^^ If the middleware approach works, then the strategy of building a generic hbridge should be valid too.

If this is still not acceptable for some reason, there is another fallback: I would go for a client-server architecture. This is explicitely allowed by the terms of the GPL (other wise GPL web browsers could only communicate with GPL web servers for instances).

I believe that is your only option here. I would suggest going through an intermediate file/stream format that is open and documented, such as Alembic or USD - not only will that useful for debugging, but it will also allow it to be modified to work with programs besides Houdini.

Anything else is about as clear of a GPL violation as I can imagine: You’re taking Blender and Houdini Engine and link into a single program. You’re releasing a version of Blender for which you can’t provide the full source code, as your build relies on third party source code.

Reimplementing the Houdini API as a no-op GPL stub is something that may infringe SideFX’ copyrights. I don’t know the details of the license of Houdini Engine, but depending on the jurisdiction you’re in, simply usign the same function names could be interpreted as a copyright violation.

I understand your motivation, Houdini is a powerful software and when used together with Blender, one can do spectacular things. And it’s cumbersome when going through the import/export tools. I’m all for improved exchange between Blender and other programs, but I don’t want you to get into legal trouble over this.

I have also been keenly eyeing the Oracle v. Google case and hoping the Supreme Court accepts its appeal (although I haven’t seen any updates on that lately). The entire software world has operated until now on the assumption that API naming is free to use, as long as you don’t steal any code (just the names of the interfaces).

But assuming that is the case (the English text that is the name of the interfaces) is fair game to reuse, then that also begs the question: how does any add-on (for example) for Blender (or any other GPL software) actually violate the GPL license if it doesn’t actually contain any licensed code? Sure, it “happens” to be code that does useful stuff if some user decides to download that code and stuff it into Blender, but the actual author of the code just wrote their own original code, unrelated to Blender’s code. How, legally speaking, can the GPL claim to have any jurisdiction over someone’s original code?

The idea is more like a plug in/add on, then a full blown middle ware.

I should have thought a bit more about the usage of the terminology, my apologies.

Below is a simplified version of the idea.

Plug in for Houdini: Generate a temp autosave asset file upon a parameter change to a user defined folder. (Toggle: On/Off)

Add on for Blender: Auto refresh assigned asset after X amount of time. (Toggle: On/Off) (X: User defined) The assigned asset would be an appended asset.

The asset file format could be Alembic or something.

It would be nice to have an auto refresh asset feature in Blender. This would be helpful when working with vertex paint and vector displacement nodes.

Reimplementing the Houdini API as a no-op GPL stub is something that may infringe SideFX’ copyrights.

Once again, I am not reimplementing SideFX’ API. What I reimplement is my own API, for the intermediate program I called here “hbridge” (I should find another name, not Houdini-related).

I think it is time for a little drawing: 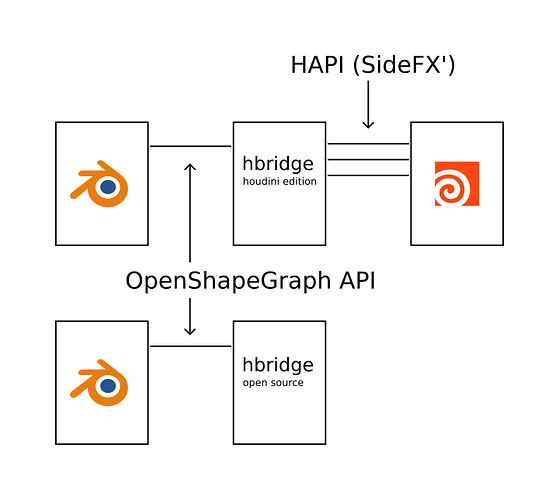 My idea is to define some open API in the same spirit as OpenFX does for 2D compositing. There are multiple GPL implementation of an OpenFX host, nothing prevents it, even though some OpenFX plug-ins are closed source. Since there exist open source OpenFX plug-ins (like all of Natron’s nodes), then an OpenFX host can be GPL.

Same here, let’s call it “OpenShapeGraph”. Blender would be an OSG host, and there would exist open source OSG plug-ins. And as a Houdini-based OSG plug-in that would happen to be compatible.

To take another example, if Allegorithmic would like to develop an “Substance Engine for Blender”, they would then have to go through this work of defining an open plug-in standard and this would be good for the open source community. I think that this is the spirit of the GPL, the GPL is not meant to frustrate developers but to foster the emergence of standalone open-source ecosystems.

edit: As I read OpenFX’ specification, I realize that the Core spec can be used as is in our case, because it is quite general. We could write a “Mesh Effect” OpenFX API, similar to the “Image Effect” OpenFX API used by Natron and the likes.

I want to ask you to respect the logo guidelines. This is not a product made by Blender Foundation, so you have to use your own identity. I also think Sidefx would think the same.

Just use the words Houdini and Blender, and add the logo of your own company or your name/url if you don’t have this.

My apologies, I just fixed the banner of the GitHub repo. And you’re right, I removed SideFX’ logo as well. Let me know if it still feels too much like the original, I don’t know exactly what’s the rule for this.

Little heads up: I have started to draft an open API for modifiers based on OpenFX:

The core contribution is in the file include/ofxMeshEffect.h. The repository also contains a draft of host code, that I could successfully run from a Blender modifier. Still a lot of work to do, but it’s taking shape.

Note to moderators It seems that all my posts with a linked to GitHub have been suddently flagged for spam, and discourse refuses me to send a message with a link to “github dot com” host… Any way to fix that?

Heads up again, I have been able to reproduce the original results with the Open Mesh Effect modifier and a Houdini-based runtime plugin: 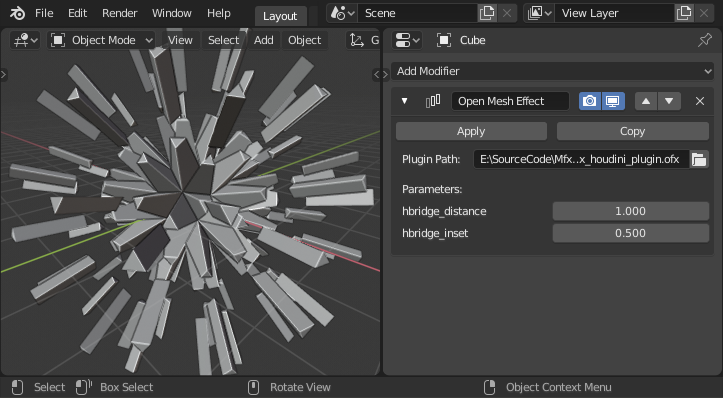 Back to the #Houdini modifier for #Blender3d, this time without the #GPL licensing issue thanks to #OpenMeshEffect. A lot of clean up work before it can be released.

So I removed the originally published source code, the one that had licensing conflict, and will release the OpenMeshEFfect branch on one hand, and the Houdini-based OpenMeshEffect plugin on the other one. Just need some time for clean up first.

The current implementation of the OpenMeshEffect modifier is now online: 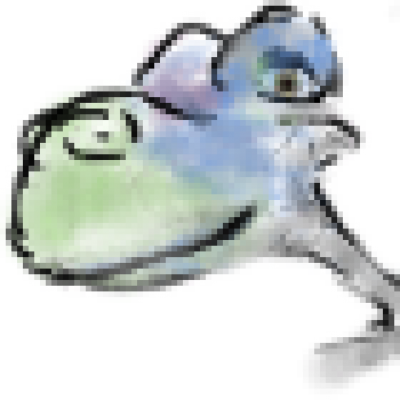 Really WIP and dirty at the moment, open for feedback. In particular, I am not sure I handle the modifier parameter’s DNA/RNA in a very idiomatic way…

I’m not a developer but I was just thinking… instead of creating your own API on top of OpenFX core wouldn’t pixars USD work? (Honestly am not technical enough to tell but that seems to be the idea)
“But unlike other interchange packages, USD also enables assembly and organization of any number of assets into virtual sets, scenes, and shots, transmit them from application to application, and non-destructively edit them (as overrides ), with a single, consistent API, in a single scenegraph. USD provides a rich toolset for reading, writing, editing, and rapidly previewing 3D geometry and shading.”

If it did, though, it would probably allow you to do more (since USD itself will have lot of development from industry and it seems like Blender Foundation will at least sponsor work on USD as an import-export format)

I can understand why the mention to “non-destructive edits” catched your eyes.

But it seems to refer to parameter overrides, not to some modifier-like standard. As far as I know, such a thing is not part of the USD format, but I’ll give it another look just in case. I am surprised tbh that there seems to be no open format for mesh effects, I would rather use something that already exists.

OpenMeshEffect sounds really interesting, is this limited to just a mesh modifier or could it do things in general to the scenegraph as well?

Some ideas off the top of my head:

If you think about it, a modifier is no less than a procedural node like Houdini’s SOPs, provided that it can have multiple inputs through object pickers, like Boolean modifier does for instance. So, yes, I would love to see it be the base for some open source alternative to Houdini Engine as well.

Your ideas are interesting things to explore. I would add, from above my todo-one-day-list:

edit: Since I had some trouble finding how to add a new modifier in Blender at the beginning of my project, I just wrote a little guide for this: https://blog.exppad.com/article/writing-blender-modifier

@Elie Thanks for the guide. Your project looks very interesting I hope more talented developers jump on board with it. There is really a lot of potential here.

The development of the Open Mesh Effect branch keeps on going with some noticable news:

I wrote a blog post to summarize the current state of the project and its context: https://blog.exppad.com/article/the-need-for-open-mesh-effect

I read your blog post. I think you should approach this in a way that Renderman’s RSL was adopted by many renderers and just copy the Houdini Engine API format for defining what ops are used to create and modify the mesh. That way, people who have been using Houdini Engine will already be familiar, and people could with little or no modification move their effects from one platform to the other.

Again, I really like this idea and hope it takes off.