When you select File / Open to load a blend file, it can seem like the program has hung . Quite often the menu will remain open and onscreen the entire time, there is no “waiting” cursor, and no indication that anything is actually happening. You are just stuck staring at the old thing until the new thing arrives.

Idea number one. Any open menus are closed, a “waiting” cursor is shown, and a small dialog that contains the thumbnail and a bit of text.

Idea number two. As above except we show the thumbnail over the entire window, so basically showing an instant low-res preview that is then replaced with the final layout.

With either idea there could be lots of changes to the dialog itself, so if you imagine it bigger, smaller, change of text, whatever, then paste a mockup of how you’d like it to look.

With idea one we could also obscure the background by some means, so darkening perhaps, if you’d like that.

With idea two there is a complication in that you might have the preview type set to “Camera View” but then have a workspace window that is very tall or very wide. Do we then add black bars to the top and bottom or sides so that the thumbnail is not stretched too much?

Comments, ideas, complaints, mockups, cheer, jeers, and whinges all welcome. Something you can’t have though is a progress bar or any other animated widget because that can’t be done reliably and I’m far too lazy for that anyway.

This is because the thumbnail included in the .blend file can be very different from what the UI will actually look like once the file has loaded, as such showing the thumbnail across the entire Blender window (Idea Number 2), then switching to the Blender UI once it’s loaded can be quite “jarring” if the thumbnail and final UI are significantly different.

Take for example a .blend saved on a computer with a dark theme and you opened it in Blender with a light theme. The change from dark theme thumbnail to light theme Blender after loading is quite “jarring” with “Idea Number 2”. With “Idea Number 1”, the preview is contained within a small window meaning any differences in the UI between the thumbnail and the final loaded result isn’t that “jarring”.

A thumbnail or preview is nice because it sometimes can help to identify if you are accidentally loading the wrong file.
However, it would be lot more useful in combination with a “cancle” button. Otherwise I either have to wait for 5 minutes until my large file has opened then load the correct one or I have to kill and restart Blender.

I still don’t intuitively understand what thumbnail I’m gonna get (the whole UI or a “material preview” render?—I’m sure there’s a logic to it, I’m just too lazy to figure it out) so I have to agree with Alaska that Idea#2 would probably not work. Aesthetically too drastic and intrusive anyways imo, even if it would.

I like the Idea#1, especially the little preview. One little spar I have with the Blender UI from time to time is when I tell it to close the whole window or open a new file and nothing happens, which confuses me for a second or two. Then I realize there must be an “Are you sure?” prompt under the current floating Preferences window. That prompt doesn’t take priority over the always-on-top floating windows like Preferences or the Drivers Editor, and it immediately gets dismissed when you click anywhere outside itself. Not to mention Blender default theme is quite dark enough that it can be hard to notice even when there is no floating window. Could (should?) that be remedied along with this change? Could (should?) we also have a “this is the thumbnail it’s gonna have” preview when we save before closing, so it’s a more noticeable prompt (and we can cancel and change our viewport to get a better thumbnail if we care for such a thing)?

This is just my person opinion, I prefer something like “Idea Number 1”

Yes, me too. Number one just makes more sense. I only cling to 2 because I find it and interesting and fun idea.

If that’s a problem with it set to “auto” then just set it to something else explicitly. Preferences / Save & Load / File Preview Type.

an “Are you sure?” prompt under the current floating Preferences window

That’s completely unrelated to this topic. 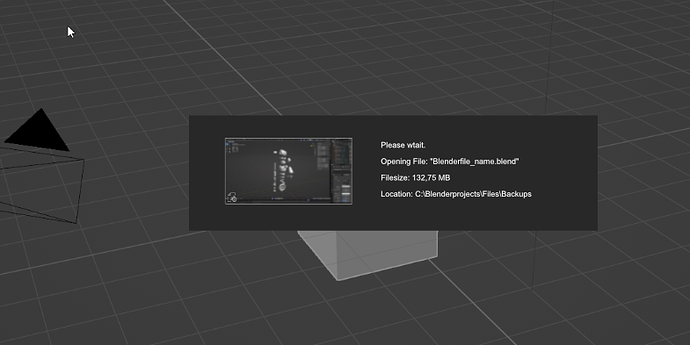 Bit of text could also include the filesize, Name and Location from where the user is opening the file (if the path isn’t too long). It can happen that the user … well … I occasionally do open stuff from where I don’t intend to (too many servers and folders) or klick the wrong thing in the list and wonder why it takes so long to load.

Number 2 is a pretty cool idea but it also feels kind of gamey. A thumbnail preview in the preview is absolutely enough.

I prefer option 1, the thumbnail would probably be very grainy on a high-dpi monitor.
Since a time estimation is not possible, you could perhaps show some scene statistics, such as vertex count, object numbers, etc. in the pop-up window. All the information that at least gives you a clue about how much data is loaded.

And maybe, if there are renders within the blend file, you could cycle those every 10s or so?

Yeah, still a fan of #1 if anything has to be done here. We don’t have enough pixels in the thumbnail to scale to full-window size and then blur over top. It’s still pretty jarring when the real UI pops into place and wouldn’t work for the Camera view type very often I think.

For #1 you could perhaps darken, very slightly, the entire UI with maybe a full-window, semi-opaque, rect to focus more attention on the dialog in front and indicate you can’t interact with the main UI just yet. Or maybe not. Just don’t make the darken operation or whatever too jarring.

Any chance this “wait please” function is going to be exposed in Python? Would be really nice to have when making functions that take a while to finish, a user might be confused since to them it seems Blender just froze.

Edit: I also cast my vote for option 1

I vote for ‘#1’ as well: it better conveys the message of “Blender is now switching to a new thing” (as per the tumbnail) than ‘#2’.

On darkening the screen, as @deadpin suggests: it might be a nice added touch, but not necessary for me: 1) Blender does not ‘darken’ on any other modal action (afaik) - the behavior would break consistency, 2) file loading is a specific / intentional user action, attention will already be on the loading action, also since you can’t do anything else anyway during loading.