If you want to create a re-usable nodegroup for texture mapping, for example this trick: It can’t really be done cleanly. Because the image texture is needed inside the nodegroup (twice, even) with stuff going into the vector socket and the output being blended afterwards.

One solution for this is to not create a nodegroup, but and add-on which replaces an image texture node with a node group containing the same, for example like 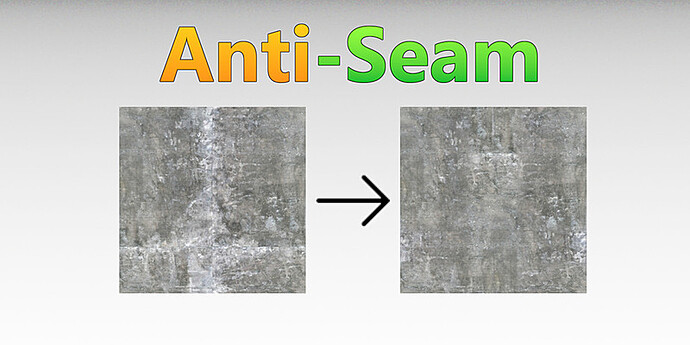 Anti-Seam is a Free Addon that removes texture seams from any image with a single click! No more hours spent removing seams from image textures, simply select an image, apply Anti-Seam, tweak and you're done!

It’s a pity the texture Image node (all texture nodes actually) actually conflates two things: Generating/loading texture data (colors) and doing the mapping. It would be nice if there would be simple ‘texture’ node which provides the color data (and has no inputs) , and a texturing node which takes a ‘texture’ input and a ‘mapping’ vector input and outputs the same as the current (Image) Texture nodes.

As a quick test I hacked the current Texture Image node to have an extra input socket where you can plug in another Texture image node to override the image data and this works like a charm. Makes texture mapping/texturing nodegroups much more reusable and simple.

My quick hack has some downsides

Anyway, if there’s any interest in this I could post my (extremely simple ) patch. And maybe try to develop a more clean way to get a separate ‘texturing’ node as described above.

An example to illustrate what I have right now.

First the way you need to do it now: 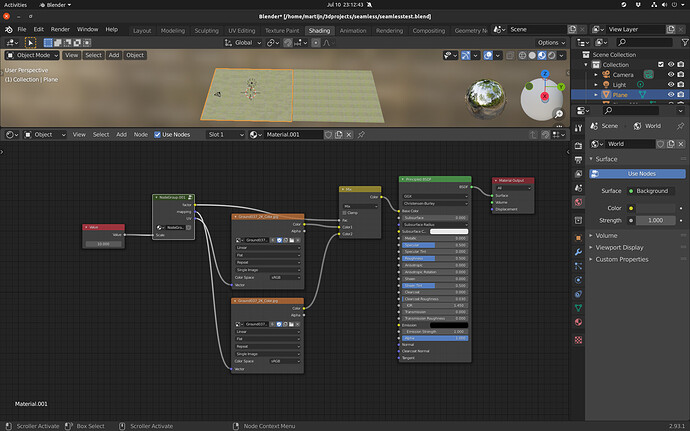 Screenshot from 2021-07-10 23-12-431920×1200 358 KB
The nodegroup uses a voronoi texture to displace the texture, and to mask the seams it is blended with the same texture on the voronoi edges. (Example normal seamless tiling on the right) Because this needs use the same texture twice you can’t put the blending step into the group node, which makes it much more cumbersome to re-use this nodegroup into another scene.

Now how it looks with my prototype: 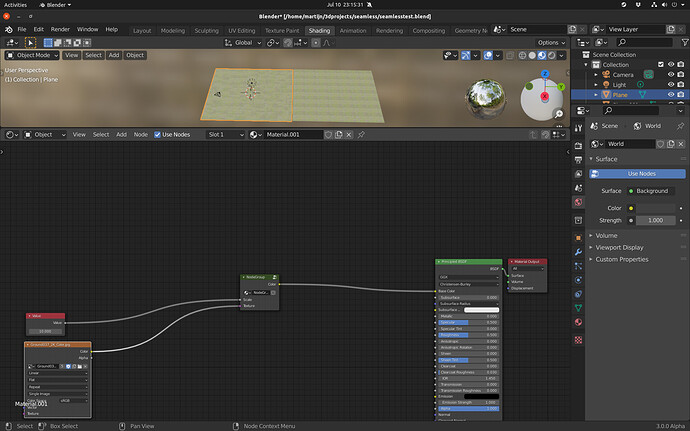 Note we can just pass the texture info into the nodegroup once .
The contents of the node group are: 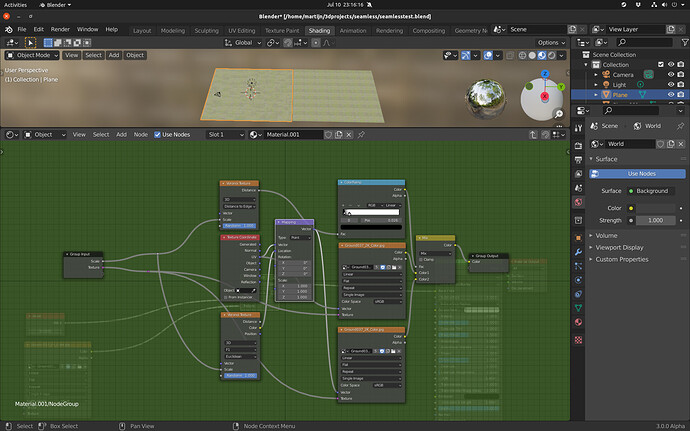 Where the texture image is overridden from the group input.

That is a very interesting proposal. But I think my proposal here is something much much simpler.

It would be more logical to expand the same idea to all texture nodes, but I’m not really sure how hard that would be. I’m still in the brainstorming stage (which is why I posted it here and not on RCS)

I think this is a good problem to solve, but it needs a more clear design. There’s two approaches that seem reasonable to me.

The idea presented in this topic falls somewhere in between, but I think it more clearly needs to be one or the other.

Support image datablock socket types, similar to objects and collections in geometry nodes. This is conceptually quite straightforward, but only solves the problem for image textures.

This is more or less what I did in this prototype (minus proper UI work). It has the big advantage that it’s easy to implement, backwards compatible and solves the most prevalent use case. (Procedural textures don’t really have the problems with repeating patterns which need these kind of texturemapping tricks).

But it feels a bit halfbaked to do it for image textures, but not for any of the other texture nodes…

Making any node option exposable as a socket is something we should aim for. So extending that to image datablocks aligns with that goal, regardless if it fully solves this particular problem.

This is exactly what I’m looking for at the moment, weird that I couldn’t find anything on the subject anywhere else.

When I need to change the main texture, I need to change it in all the nodes inside because there is no input slot in the image texture that could make it fit for a procedural workflow in the group nodes.

I think your solution might do the trick for me, do you mind sharing how you did it? Is it a node trick? I have no scripting experience so I can’t really hard code that.

This is sadly not a node trick. Not even python scripting. But a hackish proof-of-concept diff for the blender C code.

I can post what I did here no problem, but that’s maybe not too useful.

Since the geo node has a texture socket input, when to get socket input in shader node tree?