How to verify broken crash logs?

Hello. I have been having a problem where blender doesn’t generate or display in console the crash logs. It’s been happening since about 2.9 and I’m only now working up the courage to bring it up (Or rather I got stuck on a particular issue I had no method of verifying

). There will be an image example of how the CMD log looks before it crashes to “home”. It happens consistently, no matter the type of error given.

Unfortunately my only on-hand image example uses a modified version of blender, but as I’ve said its 100% not that and this is certainly irregular behavior. I’m honestly at a bit of a loss as to why this is happening. Any advice as to why this might be happening, how to properly verify that its happening to you guys, or possible fixes would be extremely appreciated.

not much can be done with the information given, best to reproduce on a stock blender and file a bug on the tracker so someone can take a peek in the debugger and see what’s going on.

That particular bug I found is specific to the build, so recreating it won’t be possible. I could always intentionally crash a stock build with python, but is there possibly a better way to intentionally break it and prove the behavioral issues? I would have posted a stock blender example if I had one on hand

There’s just nothing to go on here,

“hey weird things are happening, what could it be?” is not a guessing game i’d like to get into

Fair enough, I usually try to be as verbose as possible when explaining issues but this is one of those things that just straight up vexes me.

I found an old conversation where I verified that I wasn’t getting error codes while someone else was. Unfortunately its NDA and I can’t share more than what I have here. This was absolutely the same crash and we repeated it several times on the same build over Dropbox with identical results: 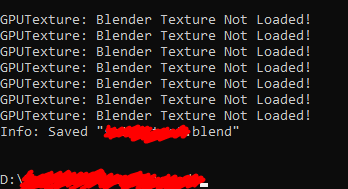 So your advice is to recreate any bug or crash scenario and to use that to make a bug tracker? I appreciate the advice as always, but wanting to verify the approach…

[filler, since the forum won’t allow posts under 20 characters]

Most likely doesn’t change anything, but I found a new crash behavior where the console spits out nonsense before a crash lol

again, strange, but without being able to reproduce the issue our selves, not something that can be acted upon.