I’m working, on an addon to transfert data from blend file to blend file and process them afterward.
I’m using bpy.ops.wm.append and bpy.ops.wm.link command to tranfert data. But I’m having trouble to understand what’s happening behind the scene regarding name collision.

Indeed in Blender two objects can’t have the same name, and they get renamed automatically. Durring an append, the same rules is applies : the appended objects got renamed if other objects with the same name already exists in the file, and I didn’t found the way to catch the objects into variable to be able to process them properly.

The workaround that I’ve found was to link them instead which doesn’t resolve the name conflict yet ( because the data is still hosted in the source blend fileI guess), then store the object in a dict, make_local() and process them the way I want. But even though, the result is not always predictable, and it look like the objects name are not always updated correctly.

So here are my questions :

I’ve made a simple setup to test this behaviour: 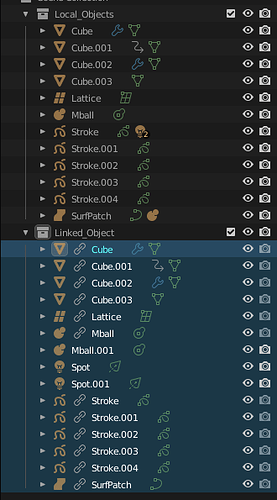 And as you can see, not all object returns another name after make_local() command is executed. And even the outliner doesn’t refresh after screen execution. It refreshes only when I hover the mouse over the outliner.