Is this what are you looking for? 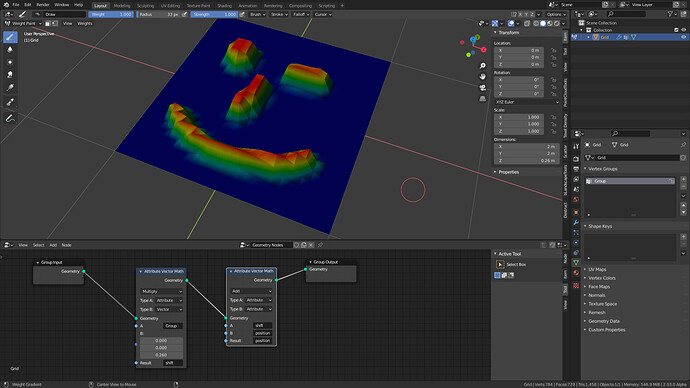 This is 4 cylinders as seen from above. From left to right: 64 faces, 36 faces, 16 faces, 8 faces, all with some cones scattered on them.

Normal Interpolation1564×720 93.3 KB
I realized that the point normals inherited from the faces are not interpolated, so they are exactly the same as the corresponding face normal.

This is a cube from above with the normals being interpolated between the face normal and the points position (I think that’s right?). 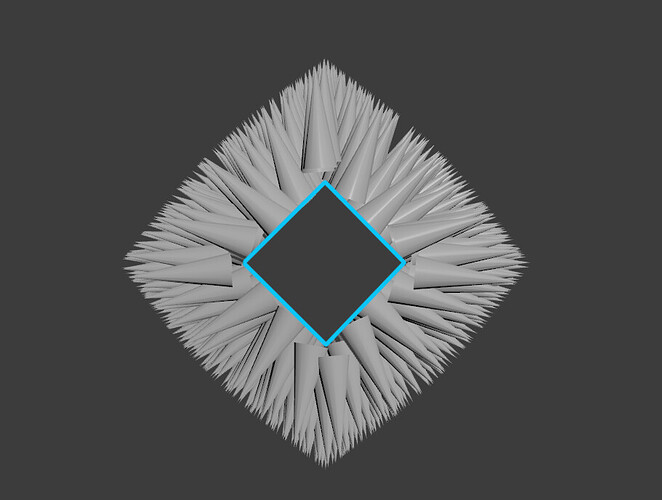 Wanted912×688 63.4 KB
I think when dealing with organic things this is the more desired behavior. Of course you could probably do exactly this with some vector math, but I feel this should be a checkbox, “interpolated or not” or something in the Point Distribute node.

Also, I know it’s a whole barrel of worms, but down the road I’d also like to see a field on the Point Distribute node to manually type what attributes are inherited/ingored.

And how do you scale a part of the mesh or rotate?

Is it just me or is everybody else also really slow in reading and figuring out what’s going on with the attribute nodes? My eyes are wandering up and down several times until understand whats going on … anyone else has the same experience?

What about introducing a divider line for some nodes to help visualizing a structure and reshuffling it a bit? 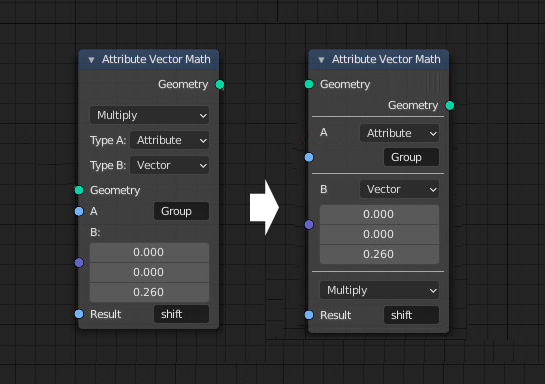 I would rather put the Type above the attribute itself for hierarchy purposes. But this is general a good idea.

You’re exactly right, that makes so much sense. Yes, I’ve been having trouble reading what attribute nodes do at a glance. That helps a lot seeing your mockup.

You are right! I modified the mock-up a bit in the earlier post, i think this improved it by a lot.

It seems like this kind of stuff would be mostly doable once we can distribute/create points in a controlled way (like an array or with a loop).
Here I tried making a phyllotaxis spiral by using the Array Modifier arraying a single vertex as a base: 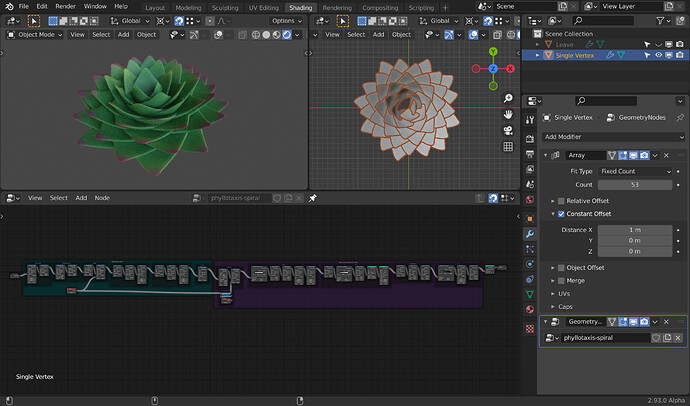 Arraying the vertices by 1 m in the x direction means, you can basically use the x position as an index. The blue-greenish frame is the actual spiral distribution while the purple frame makes adjustments to the leaves rotation and scale based on their position.

And how do you scale a part of the mesh or rotate?

I’d need to see what exactly you want to achieve.

Be able to do “procedural” assets for arch that can scale, rotate or move some parts.

The silent fail of attributes is HORRIFIC, especially for people trying to learn geometry nodes. Spent half hour on why Attribute Texture Node was not working, problem was that I forgot default UV map is called “UVMap” not “UVmap”…

Can something be done about this or is it already in the plans?

Quick test with instances displacement based on a texture. [image]

This no longer appears to work in the latest build. I have tried many different ways including above, but Attribute Texture Node just does not work with anything except density.

In the end the learning is summarized to copy what someone else has done without understanding how it works.

The attributes, are they vector? are they float? how do I know which one is which? And what are the default parameters? scale? position? normal? direction? rotation? I don’t know and there is nowhere to look. For example I tried to vary scale with a Vector Math but it turns out I couldn’t because it has no X Y Z scale, just a global scale and I wasn’t getting any feedback that I was trying to operate on a float attribute with a vector.

I wasn’t too worried about this, but seeing that it will be in the next version of blender I’m starting to worry. I have learned other programs from scratch with almost no help, like substance or houdini, but with geometry nodes I am unable to use it. Which is surprising because it is a program that I have been using for more than a decade and I know perfectly its nodes system, but the others I had never touched until I learned them.

I think that probably some changes should be considered to make the system more usable. Especially because it is going to extremely customized solutions.

And this is going to go further. Unlike shaders a node system for geometry needs dozens and dozens of parameters as it grows for a single node and the current layout makes it very difficult.

This task includes a mockup for error pop-ups: T855251

I also remember the question of useful warnings popping up on the related blender.chat channels. So I wouldn’t be worried in that regard

In the next few weeks one of the focuses is going to be addressing these sort of issues. Starting with error messages, and drop-downs for choosing attributes.

Other idea for layout 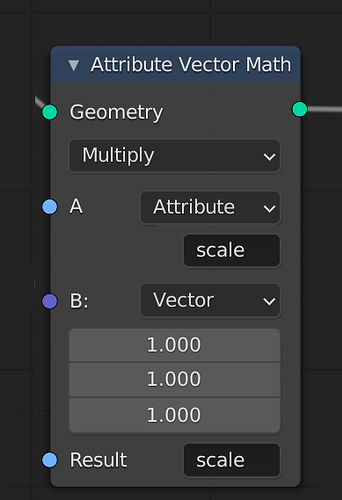 Yeah, I see your points. I still find it easier than Animation and Particle Nodes in some ways.

Lets hope the development team will address these issues.

This no longer appears to work in the latest build. I have tried many different ways including above, but Attribute Texture Node just does not work with anything except density.

In the version from February 2nd it works fine for me. 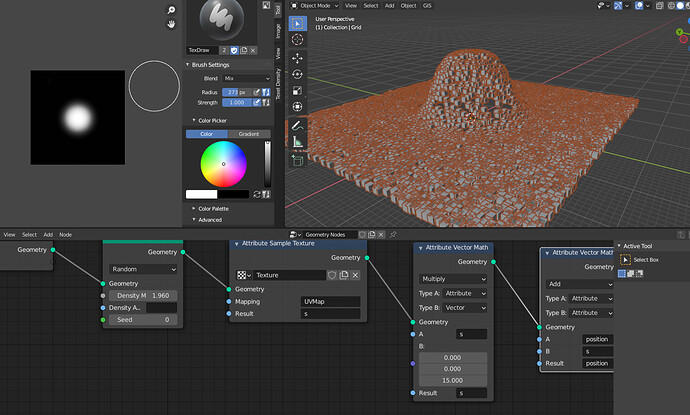 yeah, i had similar problems with animation. but like never was really a master i ignored.

Thanks , a little bit strange if you change the colorramp from lineair to bspline etc… that this make no difference 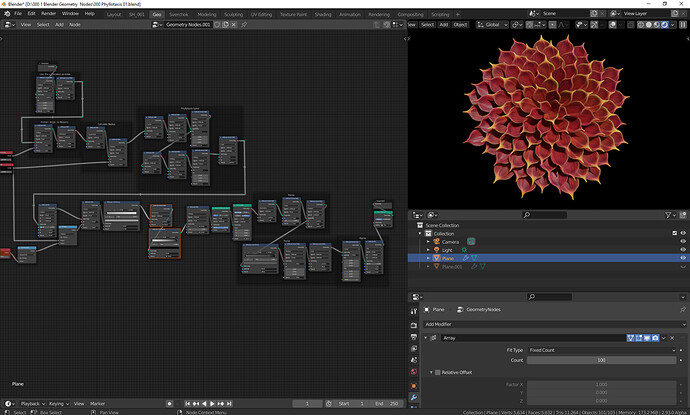