Is getting attributes on points, that are being instanced, onto the object they are instancing (so you can access them with the attribute node in the shader editor) something that it planned for the near future?

Yes you can already !! 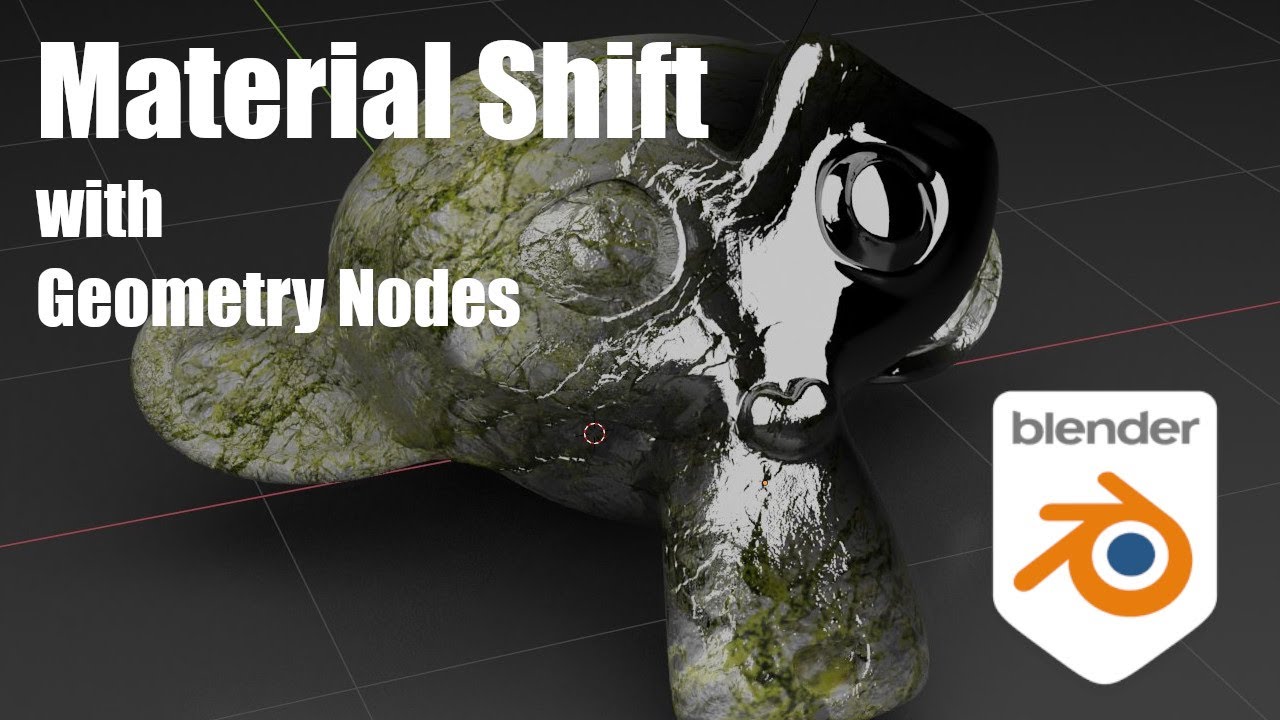 Unfortunately this is not what I’m looking for. I’ve got a grid mesh and using geometry nodes I’m instancing some cube object on each vertex. I want to add attributes to the points on the grid mesh and use the attributes in the shader of the objects I instanced

Maybe this could help. 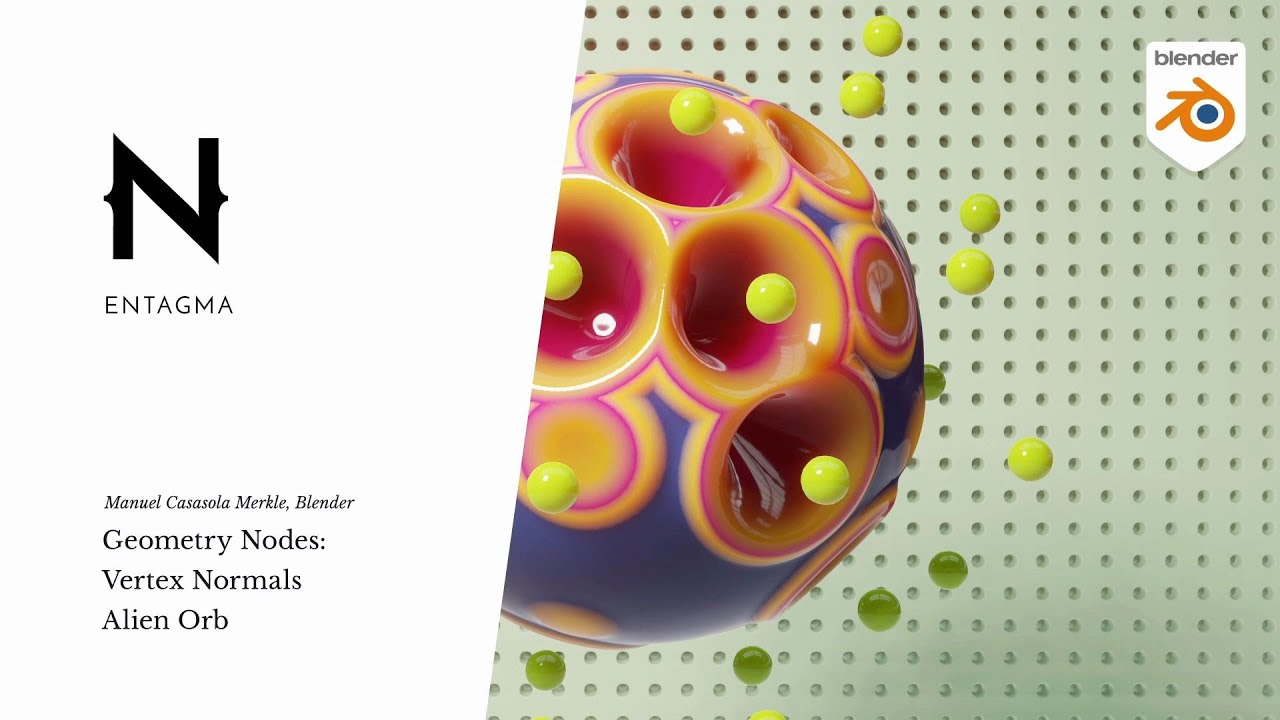 No, this is using the attributes on the object that is instancing, not the object being instanced. 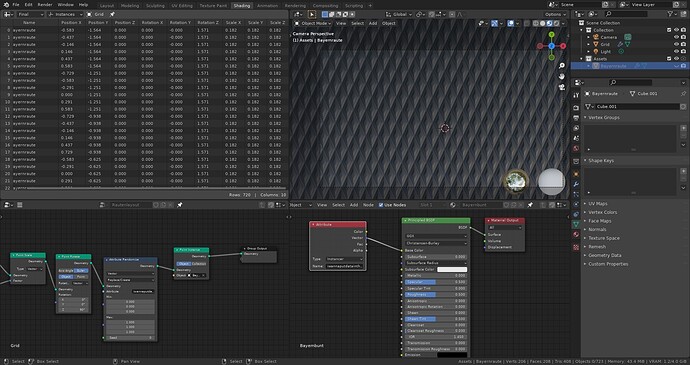 I don’t think “attribute transfer” is in yet. The only attribute that’s currently passed down from instancer to instance is normal, and even that’s happening automatically in the point instance node.

Guys, how I can manipulate individual duplicates in Geo nodes?
If I applying the Geo modifier all objects disappears, if I adding one more modifier and applying it to mesh objects loses its materials.

If you want to make the instanced object into real individual meshes then you can Apply > Make Instances Real: 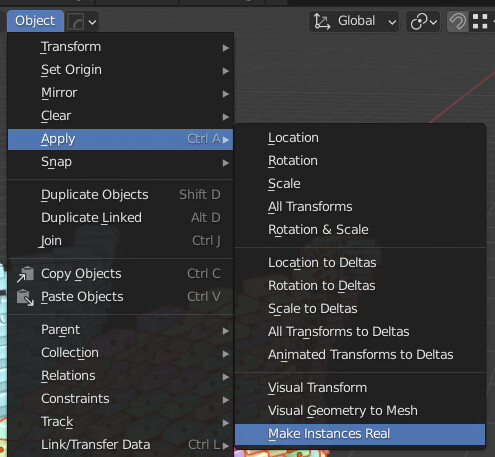 But be careful because they’re all still using the same datablock so if you edit one of the meshes they will all change together. If you want them to be properly individual, you need to also set as Single User. You can do this to all of them at once if you keep them all selected. 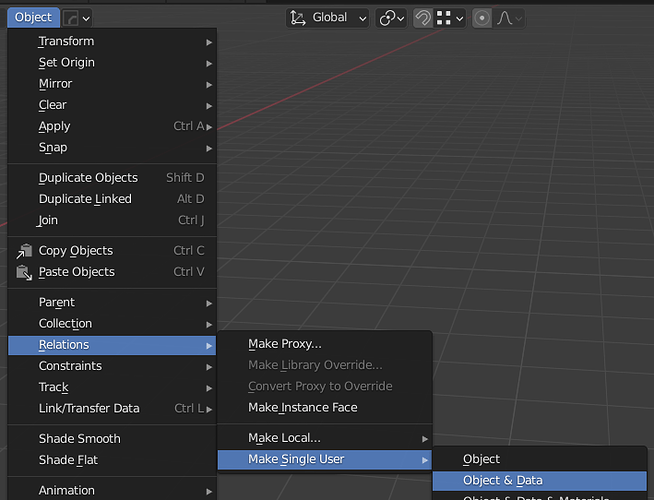 Would be useful if all duplicates were placed in a new collection after “make instances real” command. 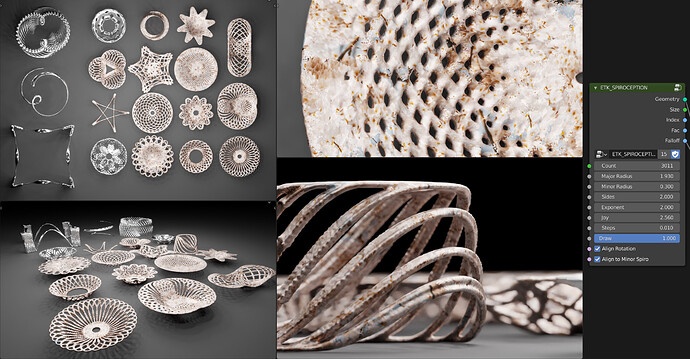 Just having a really great time with the Line node!
These are all made just setting settings on my Spiroception node (it’s just a Spirograph that spirographs a spirograph). A couple of other nodes like my stepped transform (that does an iterative transform based on index or fac) and a colourramp for the dish shapes.

This is really nice. Is this 100% geometry nodes or are you using any add-on?

image2529×501 194 KB
Just the line node to create an index value and then a few layers of trig added together to get the spirograph effect. Bowl sides are pushed up using a falloff value that’s 0-1 gradient from the inner edge to the outer edge pushed through a colourramp. Instancing an icosphere and remeshing.
Fairly simple but super versatile!
18 Likes
GecoBlack March 24, 2021, 12:07pm #1135

Hi everybody, I’m an Houdini user but recently I get interested about the new geometry nodes in Blender.
I have a couple of questions about it:

Sorry for the long post. Be able to create some procedural geometry directly inside blender and get access to all the other features that blender is offering is really exiting.

By the way as a test I was trying to create a procedural vine and I encountered some of these limitations.

Hi, as a long time grasshopper user, I’ve realised I am basically a newbie.

I tried to do something more complex, but I’ve realised I have to start pretty much from the beginning. So after watching a few youtube videos, looking through the examples here and asking @Erindale a few questions, I managed to do what I wanted to do. 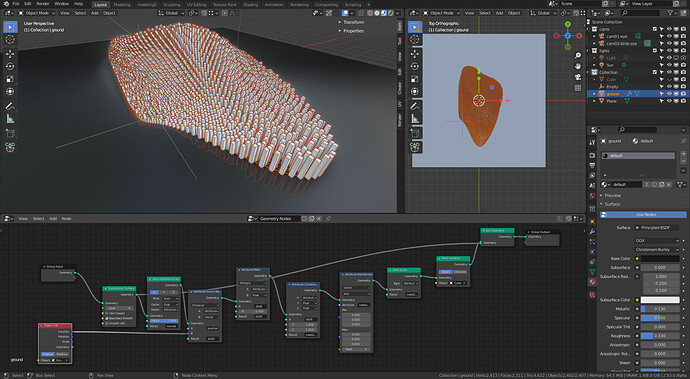 First off, wondering if there is a more efficient way to achieve attractor influence?

So this is what set off my interest at the moment into GN: 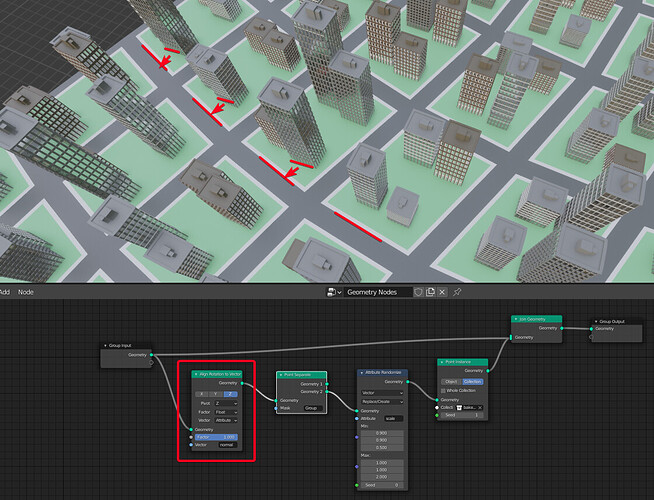 I had to to inset the green faces and used a vertex group to mask out the vertices.

On a separate note, what’s the plan for mesh editing tools?

What would be great is to start out with a base mesh, and be able to inset, extrude, set materials to get a city layout all within geometry nodes

Hi @dimitar, thanks for the feedback!

The workflow at the moment feels quite linear, as the attributes seem to be linked to the geometry data. Shouldn’t the attributes live within the object itself so we can access them without the need to plug in the geometry? Perhaps an internal object dictionary. That would allow the manipulation of attributes without the need for a linear organisation. For example an attribute get mixed in with other things and then added to the main geometry chain.

The fact that attributes are stored in the geometry itself rather than in the object or something else is really an essential part of the design, and it basically comes from the difference between objects and object data in Blender. The linear data-flow is definitely a common critique though, this design is meant to address that:
T85655: Attribute Processor for UX improvement

Is it just me or do the X and Z vector coords seem to be flipped with apply rotation? I had to scale the x vec to get these to move in the Z direction?

I don’t think that the align position to vector now is done anything in this case. Am I doing something wrong? The node seems to pick up the normal attribute only before the separate node

I’m not sure about these, maybe report a bug if you think it’s not working correctly?

The spreadsheet is really good to see what’s going on, but it doesn’t pick up data not linked to geometry. E.g, if there is some vector math not linked to an attribute, it would be useful to have a way to visualise the result

I’m not sure that values from single nodes really fit in the spreadsheet, since there is only one value for the evaluation. But here’s another design task that’s related:
T85251: Nodes Preview: Socket Inspection

Is there a way to slide the vertices along a normal direction?

Yeah, something like this should work. The convert node moves the normal attribute from the face domain to the vertices, then it gets normalized, then move position by that value with some scale. It might make sense to put this in the manual actually, since it’s such a common operation.

Could we access the face centre point somehow to use for vector direction for e.g. translating the points closer towards the centre?

I tested, and using the “Attribute Convert” node to convert position into a new center attribute on the face domain, then using that with an “Attribute Mix” node seems to work. An interesting problem!

What would be the way to align the buildings along the normal directions of the edges?

For that I think we’ll need a “Tangent” attribute

On a separate note, what’s the plan for mesh editing tools?

What would be great is to start out with a base mesh, and be able to inset, extrude, set materials to get a city layout all within geometry nodes

That sort of work will likely start with converting existing modifiers to nodes, where it makes sense at least. Then I could see work on those sort of operations starting. The task for that is here:
T86839: Converting Modifiers to Nodes

Is there a way to get the data of an attribute for a specific index in the geometry? Maybe it’s in development but it would be great if I could get specific attribute per index. Let’s say I’d like to grab the value of an attribute of the point 0 inside my geometry and then use it later on.

There is no way to do this currently, though there may be other ways to accomplish what you’re trying to do here.

How does nodes evaluate the geometry data? Do they loop through every points/polygons?

On a very high level, yes, that’s how the attribute nodes work at least.

How does edges are treated in Blender? In Houdini there’s the distinction between poly that are faces and polylines that are lines. Right now in blender the lines as far as I know are not considered as polygons infact inside the spreadsheet I don’t get any values in the polygons section.

Edges are treated as “Edges”! You’ll see that option in the drop-down in the spreadsheet header.

There will be some kind of loop system in the future?

There are no plans for that yet, but I wouldn’t rule it out.

Thank you for your reply!

There is no way to do this currently, though there may be other ways to accomplish what you’re trying to do here.

I edited a line inside the geometry node and I wanted to calculate a tangent vector for every points of the line. The intent was to subtract the current point position with the next-point position using the index of the points, but as far as I know I couldn’t do so without having access to the point data separately.
Maybe there is another way I was just trying and exploring the nodes.

Edges are treated as “Edges”! You’ll see that option in the drop-down in the spreadsheet header.

Sorry I might have been a little unclear. I mean a line could be composed by multiple edges, so is the line a polygon? Inside the spreadsheet I can see all the edges but no polygons

Hi @HooglyBoogly. Thanks for the detailed responses!

For that I think we’ll need a “Tangent” attribute

A tangent node would be really handy to have for scattering all sorts of geometrical objects. Beside buildings, it would be useful for cars on the roads, lights, benches, etc.