Hi,
is there a oprtion via python to fit a curve (bezier) to mesh?
Blender has already a cruve fit algorithm (i guess - curve decimate) but is this algorithm accessable via python ?.

What do you mean by “fit a curve to mesh”? Please explain the before/after that you want.

before:
There are a set of points from a mesh 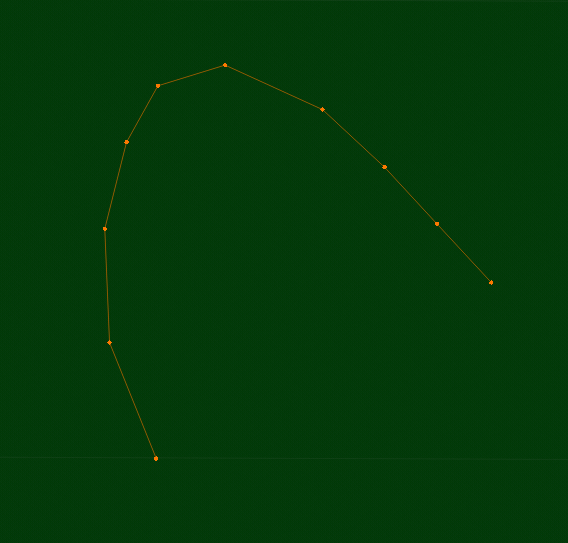 after:
A Bezier segment where the curve fits the point position. 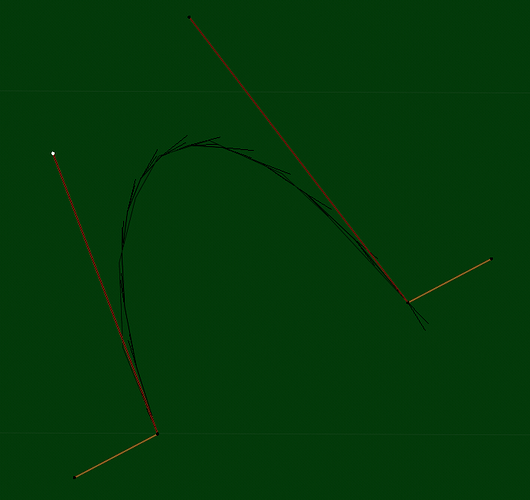 There is a function to get the interpolated bezier points

but i need the reverse behaviour wehere you have the start and endpoint and also the interpolated points and get the handle vectors.

I hope that make sense.

Thanks, that helps me answer you. Well, there is a library that you can easily build and import that was written by a Blender developer for, IIRC, internal use with the GP. It can import into Python. I haven’t tried it personally but I’ve been meaning to. I don’t know how portable it is, either. I’ve built it and imported it but I didn’t try to use it in my addon, because there was an easier, less precise way to do what I needed.

Within Blender, I don’t know of any curve fit function that’s exposed to the user, but I think internally it uses the library I linked for everything.

The easier, less precise way: Just make a Bezier curve from the points with all the control points set to ‘Auto’. There’s an operator for doing this already, and then I suppose you can use the curve-decimate addon (I don’t know how that one works).

I’ve found that this isn’t even a very helpful function. In my addon I convert the curve to a mesh and extract the data from it. It’s fast, reliable, and completely matches what the user expects. And it’s simple, too. Let Blender do the complex math!

Oh, also, this may be worth looking at: https://pomax.github.io/bezierinfo/index.html (thanks to @sybren for showing this to me

Thanks for all your help

ok i tried the decimate option but the result is not so presice like in the curve fit library.
can you explain how i can use this library , do i have to compile blender? 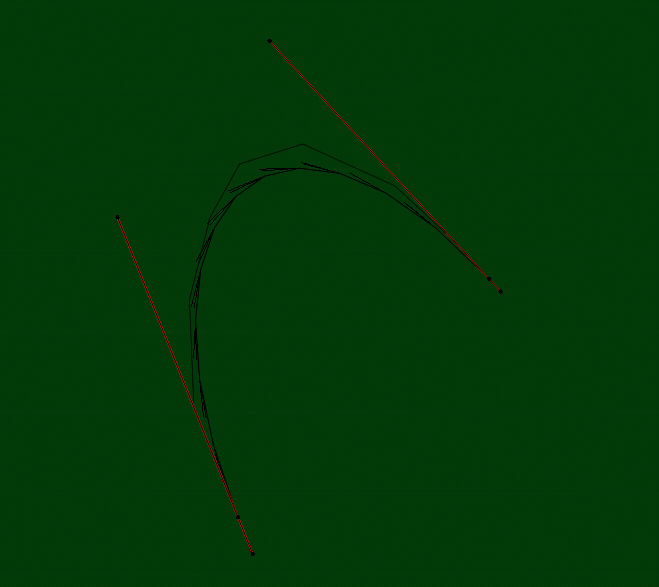 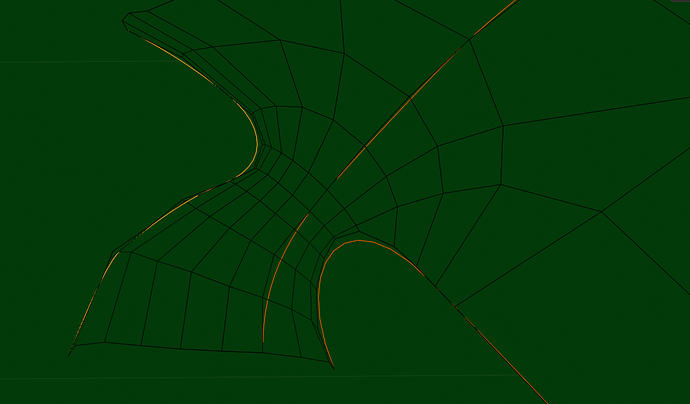 No you don’t have to compile Blender, just the library. I think it’s as simple as cloning the repo and make make install. But I haven’t done anything beyond building it, myself.

@floka
Perhaps the experimental script at the end of this post can help you.
It employs numpy.linalg.lstsq to fit Bezier spline curves to stand-alone mesh edge loops.
The standalone mesh edge loops should themselves be products of conversions of curves to meshes.
I imagine that in a workflow, one would start with a curve and shape it to one’s needs, perhaps using a shrink modifier to profile the surface of another object. I suppose, while in edit mode, one could also copy out an edge loop of an existing mesh (‘Shift-D’), turn it into an independent mesh object (‘P’) then convert that mesh object into a curve. See Howto. For the terminally curious, Rainy Day Reading discusses the script’s design and limitations.

Caveat: This is not production code. It illustrates a use of numpy in Blender. Take care. 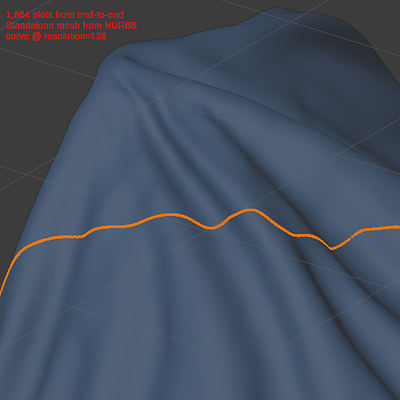 lstsqr_01600×600 69.3 KB
Dataset: A mesh generated from a curve (Object -> Convert To -> Mesh) Previously, the shrink-wrap modifier plastered the curve onto another mesh, blue in the illustration. 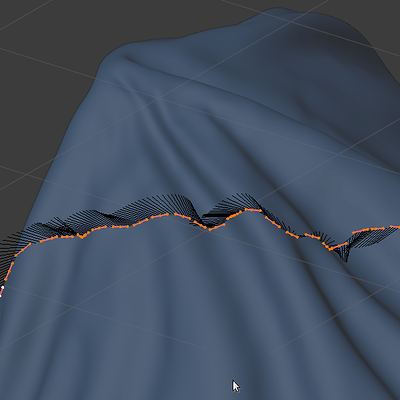 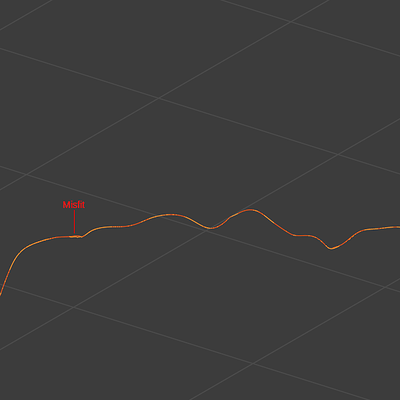 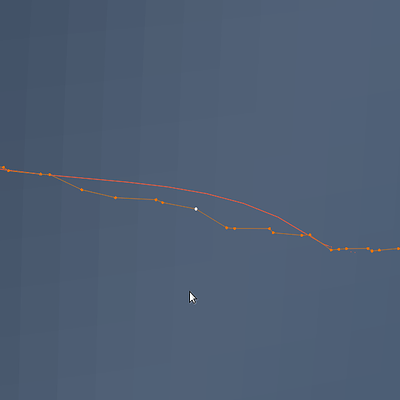 At it’s heart this script:

(1) makes explicit what is implicit in a very large number of ‘educated’ guesses we make, embodied in a matrix A - ‘educated’ in so far as we have a theory - a statistical model - with a few choice parameters x. This theory predicts how a large quantity of plot points b occur in the locations we’ve been given.

(2) tells us the liklihood of whether our theory is viable or a busted flush. If likely, then we have a solution with the x of Ax = b. That is, these x are very likely to be the correct control points for fitting a Bezier spline to the observed plot points constituting b.

What we don’t know: The explicit x - aka, our control points.

What we do know: An awful lot of locations b that - by gum! - look like a Bezier spline!

Constructing our theory: For each spline segment, a cubic Bezier polynomial pairs a control point from x with a bezier basis function written in terms of an independent parameter u. Given u, the basis function returns a weight in the range [0…1] that weights the control point, establishing its contribution to a computed location. These basis functions are linked together in the sense that all the weights they compute add up to 100% - unity. Such things are called affine combinations. All the parts - contributions - make up a whole - the computed location in space. No more. No less. Otherwise the weights do not make an affine combination and the shape of the curve changes relative to its position with respect to the origin. Cubic polynomials have four terms, four pairings of control points with their allied basis functions. This weighted sum of control point locations constitutes one plotted point.

Relating the known to the unknown: A is a set of educated guesses produced by our theory. Each row of A connects a plot point from b to our theory through a set of weights, corresponding to each purported control point. Some people call A an observation matrix because of the way it connects observational reality (plot points) to theoretical fantasy (educated guesses). These weights set the contribution of purported control points drawn from x to the location of a specific plot point drawn from b. We don’t know where those purported control points are, but we provide hints in the form of implied behavior: wherever those control points are, when we weight their contributions - using these particular weights! - we compute the location of a corresponding plot point in b. Behind the scenes, we’ve used the Bezier basis functions by themselves to compute the weights. All of our myriad hints, one hint for each plot point, taken together imply a specific set of locations for the control points, or so we claim. For these hints are not grounded in any kind of reality. They are grounded in our theory, to wit: that a Bezier spline curve underlies this large list of locations. We are doing statistics here, not mathematics, and Bezier curves constitutes our statistical model.

Technique: Having composed our myriad educated guesses in A we ask a Least Squares Solver in numpy - numpy.linalg.lstsq to invert A and put on the right hand side of the equation, solving for the control points x. I’m not going into the LS technique here. I recommend Sec 15, Numerical Recipes in C, “Least Squares as a Maximum Likelihood Estimator” (Cambridge University Press, 2nd Ed. pp 657ff, Press, Teukolsky, Vetterling & Flannery). About a bazillion PDF’s of this reference are floating around the Web. While your nose is in that reference, also take a peek at Singular Value Decomposition (SVD), section 2.6, a technique to separate matrices like A into three, more computationally tractible matrices.

Bookkeeping: Most of it involves cooking up the guesswork matrix: A.

tryit() contains the development run-up to A culminating in the request to invert A and provide (1) likey coefficients (control points): x and (2) an array of residues in each coordinate of the plot point. These tell us if we have a busted flush in any one or more dimensions. The larger the residue, the more likely we have a busted theory.

Main loop: Divide and conquer by binary division. We manage this through an array of slices kept in stack. Typical game: First try for the whole curve as one Bezier segment. If that theory exhibits high residue, then divide the plot point set by two and attempt to find fits for the two halves. And so on. When the stack empties, we have a sequence of solutions: in aggregate, the purported Bezier spline.

This is an illustrative script, not a production one. Script comments discuss a few weaknesses. I would be interested if people find areas where it works and where it does not, perhaps flushing out other weaknesses. Thank you in advance for that.