When I switch to 2.8 branch, i can built successful, but when i run get the result:
"

Current thread 0x00002f34 (most recent call first):
"
on my computer, there are some portable python, but no path on environment
I search on, known it is python problem when use, but how the blender with python handle this ?

Did you run “make install” or equivalent to install files?

Note also that the branch that has the latest 2.8 is master.

on the win10, i run make.bat update and make.bat lite to execute the build,

and there is no install parameter to make.bat

and the result is ok, no any error, but run the code get the creash

here the problem is python, can’t find some module!

It’s also not finding the OpenColorIO configuration, which means it’s more likely to be a problem where it’s not copying all files rather than just the Python files.

Perhaps it’s best to delete the build_windows_Lite_x64_vc15_Release folder and do a completely new build.

I do many times, make code and lib update and build again! the problem still exist,

not sure is my computer environment, i have some portable python on

and use virtualenv to manageme python

Same problem here, with a Debug Build of today’s sculpt-mode-feature branch. Tried with make full first (in order to work a bit on the voxel remesh modifier) and wanted to debug something, so i switched from Release to Debug.

Running this in a debugger yielded an exception here, probably due to “encodings” module not being found (although a non-empty folder with this name is present in blenders python directory) under 2.80 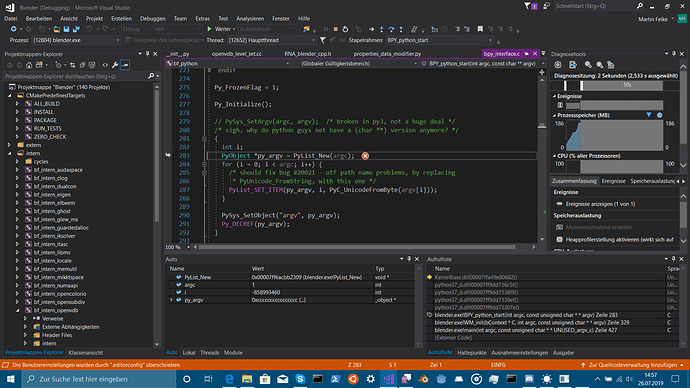 Happens also on Win 10. Furthermore i also dont have any system python installed, no pathes related to python in environment variables.

Just for the sake of completeness.

Something or someone has undone the work of this commit in the sculpting branch, that’s why you are having python issues.