I’ve made an addon which has a custom UI for modifiers and I’d like to show the same warnings in the custom layout as are shown in the regular one. 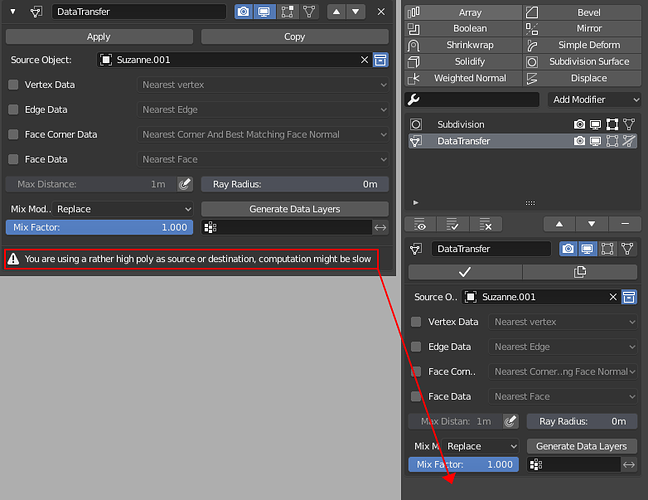 Some warnings I can, more or less, implement myself going through the source code and writing the warning checks in Python. However, for example, the warning shown in the image is impossible(?) to achieve because I would need to know the vertex count after the Subdivision Surface modifier which I don’t think is possible.

Any suggestions? I assume this is not possible but it doesn’t hurt to ask…

That “error” data is stored in the ModifierData struct in the C code. Some of the elements of that struct are exposed to the RNA system but the “error” string isn’t. I think it would be a pretty trivial change in the C code but I’m not familiar with the design in this area to be confident that it should be.

If I need a break and have some free time I can make a patch for it though.

OK, thanks for you answer! I’ll move onto other features for now.

Afaics the warning is triggered if either the resulting mesh or the input mesh is higher than 10k verts.

You can somewhat recreate this with something like this:

Thanks for the answer anyway.