I’ve been working on ways to make a “Connect Curve” node work. I’ve run into a couple of dead ends and wanted to share the thought process that has gotten me this far.

There are 2 modes for the node: Order and Threshold

Order is an easy one. Simply go through the splines in the order that they exist in the input geometry. Add them to a “merge map” structure that can be passed to an output curve building function.

Threshold is where I have run into trouble.

For the most part, this implemented pretty well, but ran into an artistic issue: 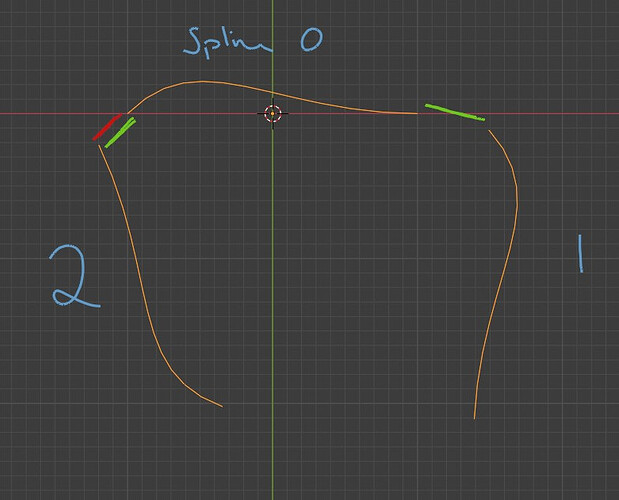 This algorithm would produce the red connection in this image. Since spline 0 would match to spline 2, but when spline 1 is processed, it would not connect to spline 0 since spline 0 was already “used”. I believe this is mainly because while it is based on distance, this algorithm is still very much a linear search. So later closer connections may not be found until it is too late to use them.

A second algorithm that I attempted to implement to address this issue was this:

Hmm, getting a proper solution to this isn’t trivial, is it! Doing a bit of research, I think this is actually a common problem: Closest pair of points problem - Wikipedia

Maybe that’s helpful? The distance threshold could be an important optimization, like you mention though.

The KD tree made getting the pairs a lot easier. even getting them down to a distance-ordered list of endpoint pairs wasn’t too bad. It’s distilling that information into the list of splines in the right order and reversing them when the case requires is my real hurdle.

Not 100% sure, but I think flexi bezier tools addon can do this? Maybe worth checking out.

Though I have not a 99% definite answer on how to roll with this, I can think of this strategy.

P.S. I had to solve such a similar problem (except setting the positions - they were snapped manually from the user). See if is helpful.

Sorting the curves? - #2 by grosgood