This is my first post here and have just signed up.
Not sure if this is the right forum to ask this

However, I am now wanting to go to the next stage, but as I suspected before learning to code in Python and using the blender python API, and the reason for initially starting in Unreal engine, blender python is not adequate for the task. I had to use a few hacks to get things to work as it was. So, I have decided to try and create, if possible, a blender python module which can be incorporated into blender using c++.

Hi, I understand you want to code in C/C++ but keep that code as an add-on for Blender, right?
May I ask what hacks you had to make to work it as it was? Do you want to go back to C/C++ for performance reasons as well?
I ask because if you already have a python module working, it’s probably easier to make it better than to go full C/C++.
Also, it’s important to know if you intend to distribute your C/C++ code, since you have to take into account compiling for different platforms.

If I’m understanding what you’re trying to do it’s fairly straightforward- there are already Blender addons that do this (notably UVPackmaster). The process is fairly simple when you distill it down to the basic functionality: Pack up your mesh data in python, send it to your external process, do your thing, then send it back. I’m assuming the sending and receiving part is what you want help with, given that the other parts are going to be unique to your project.

while your addon is doing its thing, you will want a modal operator waiting for a response so you can unpack the data it receives. There’s a modal operator template that ships with Blender which is a good start for how you would set something like that up.

Side note- this probably goes without saying, but when you’re dealing with external processes, you have to handle all of the multiplatform stuff yourself because you’ve left the safety of Blender. Obviously you’ll have to compile your own binary for each OS you intend to support, but your python implementation will also need special checks for OS as well.

If I understand correctly, you want to extend Blender’s embedded Python interpreter with C/C++ code.
This might help:
https://docs.python.org/3/extending/extending.html

Thank you for you reply.

The most profound hack one was to use some python code I found on the net (https://www.geeksforgeeks.org/implementation-of-dynamic-array-in-python/) to create a dynamic array similar to the function of a c++ vector array. Another was to modify this code so I could effectively “clear” it of data.as only appending to it was given. Had to do this as what I thought was a local variable in a python class was was retaining values between separate calls calls to it.

The rest had to deal with having to repeat the same code with different variable names or slightly modified. Python classes and structures behave differently to c++ and so I had to adjust and what I thought were local variables were not really local.

I have also considered that the addon I have created cannot be improved. The reason I want to create a C/C++ python module is that the next stage involves recursive routines requiring pointers to parent and child objects stored in a dynamic vector array, and traversing through the links. in short, this content generator I have created in C++ loads an existing mesh object, copies and pastes and performs routines to place that object within a scene, rotate it and scale it. And yes, there are performance issues as well.It seems when performing every blender python action like copy/paste, location, rotation, scale etc is stored in blenders do/undo that can slow things down to a crawl.

So it is my view to create c++ python module is a lot easier in every way than trying to recreate this in python code. Python is a scripting language, not a programing language in my opinion and to have a python script of one line is a lot easier than one of what I see will can be balloon in a several hundred.

Oh and as a side note, I am experimenting at the moment. Thoughts about submitting my code for including in Blender is not entering my mind right now. That comes later. I am just seeing what I can do in creating content within Blender.

Here is a sample of what I have achieved in unreal engine. 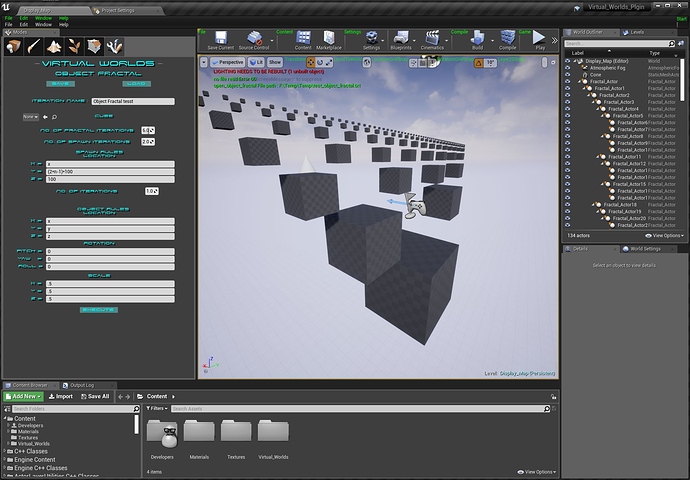 To get and Idea of what I am doing and why I want to create a C++ bender python module, please look at my reply to Brachi. I am not not dealing with external processes at all, except creating and application to create a text file which the blender addon I have created reads to get the parameter data to perform its function. A very simple task to do. The user selects this text file through a Blender UI widget, presses a button to read that text file, process the parameter data to generate content, and needs to do nothing else.

Greetings Stiv and thanks.

I have already read this, and some extra stuff as well. It does not seem all that difficult to do.

Thank you, that is what I needed to know.

I am only go to focus on Blender 2.8 ad beyond and where I have done my coding for. So it is 3.7 I will be using

All that is left is to find the source code that the blender python modules were created from such as bpy.object.XXXXX, bpy.context.XXXXX etc. so I can find out if/how to write c/c++ python module to call functions and perform tasks such as bpy.context.object, bpy.ops.object.delete and more. I have found what looks like the blender python c/c++ source code, within the /source/blender/python/ directory, but nothing specific of what bpy module each refers to if any. I need to spend more time to investigate.

It’s probably easier just to do those things in python, and just have the performance sensitive things in the C/C++ module.

Well I may pause my ambition here a while. I have looked at the source code more closely and found all, or most of the c code that the blender python extensions seems to originate from is in the source/blender/editors directory, and that the c functions are referenced using function pointers from within a data structure called wmOperatorType.

However, I have found on the net, a method to call a python function within a c python extension called PyEval_CallFunction. This looks to be the best solution. But no documentation or examples of how to use can be found.

But this is of no worry to me now. I am itching to pursue this later and concentrate on something else.

Thank you and Regards

Best option that I’ve found is make an actual DLL that Blender Python module call through CFFI library. You can easily install CFFI into Blender:

Zero hassle with different Python versions which can very quickly become a pain. Only thing you need to worry about is getting data through a C interface. Meaning you’re not just limited to C or C++, you can use any language you wish, like Rust.

Once the module is written, it should very easily work everywhere. If Blender only became with CFFI pre-installed, it would be even better.

With pickling from Blender to the module, you won’t get as fast data transfer. With CFFI, you can transfer Numpy arrays from Blender and back instantly. Meaning any data the Blender Python has access to, can get instant access from fast languages like C++ and Rust.

Interesting. Thank you for this information.

However I have decided to pursue my ideas by using Qt as I have been. I have decided that using Blender is not the way to go in creating procedural content for 3D applications like Blender to use and modify. Its python focused design and structure is just not suitable. Qt and other C++ librabries I have found since this original post offers a path that I can pursue. I consider this thread now closed and will not be pursuing this path in Blender.