Color for each facet

Hi
I’m new to Blander but I want to use it to edit various stl file via Python code. I have gotten started with making some primatives, transforming them and subtracting them. Here is the code:

Now would like to change the color of individual facets of the mesh depending on their orientation in space. Below is some nonfunctional code to illustrate my problem. There are currently two issues:

Whenever I wish to know how well one vector - such as face normals -
aligns with another I reach for the dot product; the function is built
into Blender’s Vector. The scalar value which the dot product
gives may be employed as an ‘alignment meter’. 1: two normalized
vectors are colinear and pointing in the same direction. -1: two
normalized vectors are colinear, but pointing in opposite directions.
(-1.0, … 1.0): the two vectors define a plane, the alignment meter
returns the cosine of the angle separating them in that plane. Note:
the parenthetical notation means “open set” - everything between negative
and positive one are in the set, but neither of the limit values are. While I have
been particular about “normalized” vectors - those whose lengths are
one - if I forget to normalize vectors and still take dot products
then I don’t get the cosine; I get a scaled version of it. That
version varies in the same manner; it’s a ‘relative alignment meter’
For most purposes that works and it cuts down on the math, so it is
faster to compute.

I think the simplest approach to your problem is to dispense
with Python entirely, and define a material that incorporates
an alignment meter. Here is one (version 2.90) possibility: 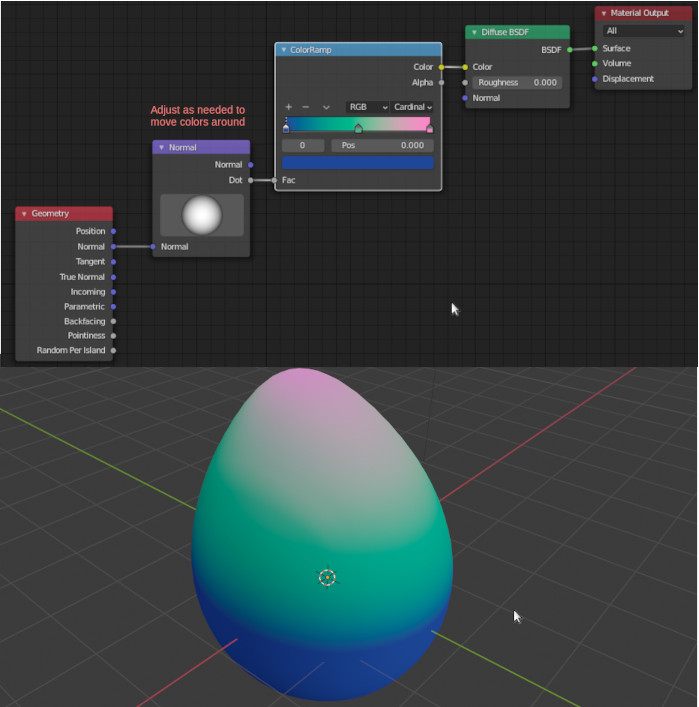 Now the material automagically assigns each face a color based on its orientation with respect
to the Normal node. You may vary the Normal node to suite your needs and change
ColorRamp as you see fit.

The Normal node is newish. In older blenders, use Combine XYZ to input
vectors by hand numerically and combine that input with the Normal input from
the Geometry node by way of the Vector Math node, which contains the dot product.

Though this, being the python section, then I best include some Python,
else the board moderators might descend upon me in a white
heat. Here are some fragments that might be useful here and there: