This is not so much a dev subject more of an administration topic. But I couldn’t find who is the module owner of Steamworks. All I find is that Valve actually reached out to BF to get Blender on Steam.

Anyways the delay from releasing a new version and it’s being available via Steam is pretty fast with 2.79b. But … there are some things that haven’t update since the launch. Splash screens are from 2.78. Probably missing some cover art which makes it [Blender] not showing up correctly in Steam Library. 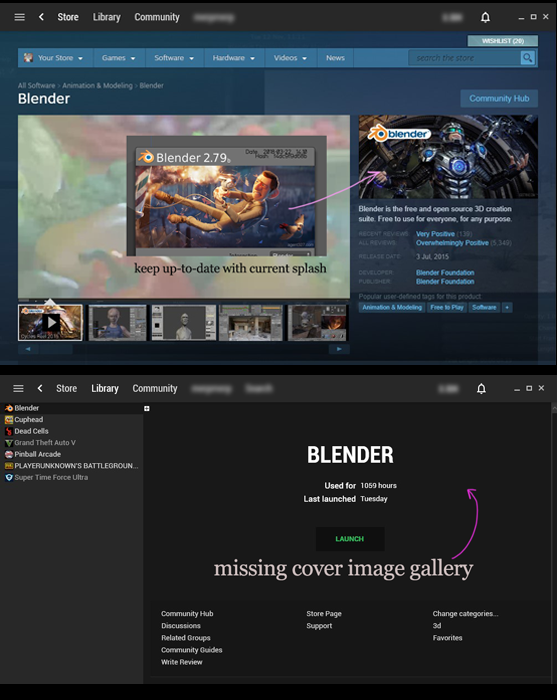 So my question is who is in charge of Blender Steamworks, and do you need help? I plan to within this year sign up as partner on Steamworks as soon as I register a company and get tax numbers.

Anyways I think it’s important to keep it up to date, there’s quite a large amount of people using Blender via Steam. Here are some numbers,

5349 reviews with a score of ‘Overwhelmingly positive’
From Steam Spy, roughly 1.5 Million have downloaded Blender on Steam, 800k have opened it. And last two weeks 50k are using Blender.

Hi, I’m the Steamworks module owner. Thanks for pointing out the missing/out-of-date images, I’ll look into fixing this. The Steam backend does not help in this.

Francesco! Cool. I think I found something in the documentation. Here’s the link.
https://partner.steamgames.com/doc/store/assets

Maybe there’s an issue with Image dimensions, I would guess the Steamworks backend to run the store pages just fetches images, and if they have the right dimension it uses one for different cover images, what they call capsules.

Try uploading an image to the store page for Blender in that exact dimension and I can respond if it works for the User Library.