I am trying to understand, how it’s possible to bake textures by using Cycles. Not from the Blender, but by using Cycles API as external render engine. There are no many differences between bake(…) and render(…) functions in the blender_session.cpp file. I setup a simple scene: plane with uvs, cube, one light source and a camera, and I would like to bake combine pass for the plane.

As I understand, the session setup for the baking differs from the setup for render in two items:

But here is a problem. What data should be passed to the render engine in this callback? In Blender sources this callback contains the following code:

What data contained in b_pass.rect()? And what I should do in my case? If I do not set a callback, then the renderer renders a usual image from the camera in the scene.
May be the render session requires some additional setup? For example, how the renderer know the uv-coordinates for projection of the baked data? Is it use the default uvs (contained in ATTR_STD_UV attribute), or these coordinates should be setup manually?
Or may be baking in the Cycles is not the same, as baking in general sense? Is it possible to obtain for example lightmaps of objects from the scene?
Here is a link to source file, which contains a code for console application: https://github.com/Tugcga/CyclesBake/blob/master/bake_app.cpp
What I am missing in this code, and what should be added to obtain a proper baking result?
I am sorry for so many questions.

Using baking with the Cycles API is not so simple, because much of the implementation is inside Blender. You would have to look into that code to really understand how it works.

It requires some buffers to be filled with object ID, primitive ID, barycentric uv, and differentials of this uv.

Ok, thank you very much. I understand the general logic of the baking process, but details are too complicated (at least for me).

Here is a very simple working example of texture baking with cycles API: 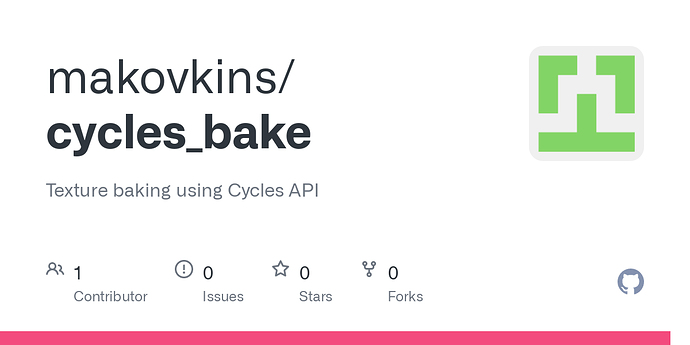 It’s great. Thank you very much.