This is a weekly video chat meeting for planning and discussion of development related to the sculpting and painting in Blender. Any contributor (developer, UI/UX designer, writer, …) working on these features in Blender is welcome to join and add proposed items to the agenda.
Write us a message in the module chat if you’re interested.

Also a conversation on adding a proper mask/disabled mask icon. 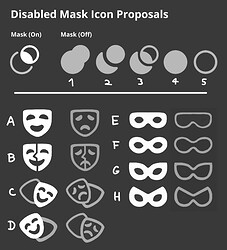 E seems to be the favorite for readability and generic meaning of Mask.
Needs to be more square though.
Julien will do more sketches and a polished version for 3.5.

Joe worked on proper support of “Adjust Last Operation” settings.
Filters, Gestures and other Active Tools were implemented in toolbar because of previous limitations.

We agreed that we want to focus some time to adding Filters, Gestures and Edit tools as menu operators, now that the previous limitations are lifted.

This would have various advantages:

Everyone seems to agree.
Joe thinks that can be done, but mentioned that some filters already have a good performance optimization. So that is less of a reason to add them as menu operators.
There might be some extra work attached to this, so what works and what doesn’t needs to be tested.

It becomes vital to fix

T99607 Resolve “Shift R” shortcut conflict then.
Fast redoing will become an important operation in Sculpt Mode.
We can soon change the shortcut to R instead.
Rotate and old popup is not as needed, so there is no conflict.
The same shortcut could be used for Dyntopo resizing as well if Dyntopo is enabled.
Curve sculpt mode would also use the shortcut for hair density resizing.

We’ll make a task for setting the sculpt-session pivot location via a shortcut and a tool settings.
Also we need to make it possible to change the orientation of the sculpt session pivot.
This is closely tied to

D9540 Sculpt: Option to transform only the sculpt pivot

The general idea is to use the shortcut Shift RC to set the pivot, just like setting the 3D cursor in other modes.
The behavior for setting, snapping and transforming the pivot should be the same.

A toggle will also be added to the transform tools tool settings to only transform the pivot.

This would solve common shortcut inconsistencies and conflicts:

Sculpt Mode (and eventual Paint Mode) wouldn’t have the usual “Selection” workflow.
So it can stand outside of the LCS/RCS preference.

This will make the operator more useful for repeated fast masking of multiple areas and face sets. (No need to press F and E every time)
Makes the main use cases easier to understand.
→ More in this video

Later we can revisit the current behavior with

We should add this operator to the menus to make it more accessible and easier to assign a shortcut.
We will need to soon add a “Paint” menu in sculpt mode too, especially once more operators are added.

We started a discussion on the purpose and usefulness of the sculpt-dev branch going forward.
There are many complaints and reports coming in that the branch is unstable and not as usable as it used to be.
Obvious reasons for this are that the branch is bloated it old refactors, abandoned features and otherwise highly experimental prototypes.
This doesn’t make it easy to develop or to test.

The main advantages of this branch that we want to embrace and focus on are:

For that we need to do the following:

All of this will make the branch more stable and easier to judge what should receive feedback.
We could even rename the branch to something to indicate that it’s for prototyping.
(Like sculpt-prototyping)

Joe will think about this further and revisit this topic another time, since it’s not a priority atm.

hi, im not doing a feature request here, it may sound like it, it just to get some info about it.
at the begging of the year was a list of features to work on, and there are two things i didin’t read anything else about,
1- baking displacement new methods (not normalized)
2- all the features for dyntopo that are in the Sculp-dev branch.
Are those two target still in the realistic “todo” list of the main team or those where move to the “wishlist” for someone else to tackle?