The main goal of this meeting was to prioritise work for 2.92. The meeting was be open for everybody who’s interested.

Since the Last Meeting

TODOs removed to make place for the above

Originally planned for 2.92: re-implementing Visual Keying so that it makes sense. Sybren is unsure of the priority of this, though. After some discussion, the conclusion was that it’s a nice feature but probably for a later release.

Copy-paste of world transforms, such as T57003: Copy visual pose and paste over frame range, can can be used for similar things (like performing some changes while keeping the world transform), but has more applications. Work on the Pose Thumbnails add-on also has higher priority.

Smart Action Baking is a goal for 2.92 as well. This basically works the same as regular Action Baking (i.e. evaluate the animation and key the result), except that it only updates existing keys (instead of keying on every frame).

The next meeting will be on Thursday 17 December, 16:00 CET/Amsterdam time. Again it will be open for everybody who’s interested. The provisionary meeting agenda will be linked in the #animation-module channel before the meeting.

If I may propose a topic of discussion, can one of the artists in the module provide better images for the 2.91 release page? 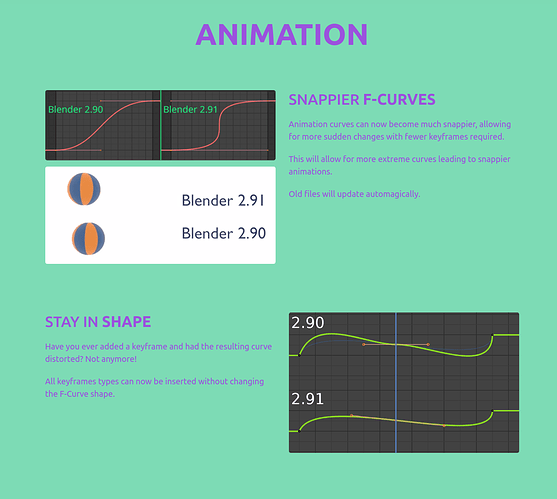 I remember someone mentioning that native support for onion skinning (for 3D objects) was planned for Blender. At the moment, I am using add-ons, which mostly rely on object duplication, with associated speed penalty.

Is a native implementation planned? It would help so much with animating!

As far as I know there is no concrete plan for this.

The next meeting has been pushed backwards by a week, and will be on Thursday 17 December 16:00 CET.

As far as I remember, onion skinning would require multi-threading animation calculation and being able to calculate onion skin positions in other threads, and possibly some kind of caching? So a seemingly simple thing takes a lot of effort to do well (but the upside is that the changes would be good for the animation system in general)